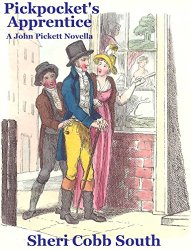 When magistrate Patrick Colquhoun orders a habitual thief transported to Botany Bay, he doesn’t realize a fourteen-year-old boy has been left behind—not until young John Pickett is hauled into Bow Street for stealing an apple. Colquhoun arranges a job for John hauling coal, where John promptly falls in love with pert Sophy. At nineteen Pickett stumbles into a criminal investigation which will change the course of his life.

This is a prequel novella for the John Picket mystery series. It is definitely not a romance. Instead it shows the start of the rise of a man of honor and integrity from desperate beginnings when he’s given a chance and trust.

It’s an opportunity for readers new to the series or old hands to get some background information on our favorite Regency Bow Street Runner. The latest novel, “Family Plot,” offered some hints on how John moved up in the world from being the son of a notorious pickpocket who was transported to Australia for his crimes. Luckily for John, he is caught and brought before magistrate Patrick Colquhoun who sees something in the scruffy fourteen year old who has been abandoned to London’s worst streets and criminals.

But even Colquhoun doesn’t immediately realize John is a diamond in the rough and it takes John five long years of work before he comes to the notice of the law again, though this time in a good way. Along the way, we learn how hard physical labor was then for the working class, see how much easier life was for the middle classes in Trade and how both could be screwed over by the Quality. The class divisions were rigid and for John to aspire to more than he was born to takes a lot of effort and just plain luck.

What I really enjoyed was seeing the beginnings of the mentor relationship that now exists between John and Colquhoun. It’s not that of father and son but something almost better – that of a man who sees intelligence and a hard work ethic where he lest expected and who takes a chance and nurtures these qualities in a teenager most would have just as soon see hang as lend a hand to. The novella also whets my appetite for the next installment of the series and the fallout from the Scottish Marriage Laws. B