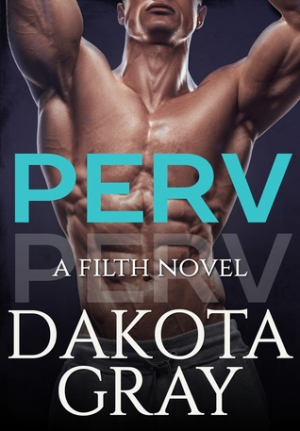 There was quite a bit of buzz about Perv on Twitter. 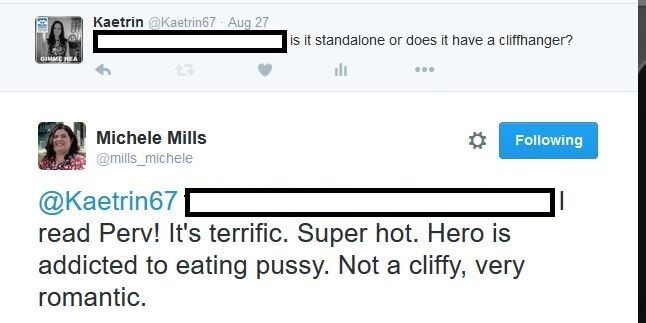 So of course I bought it.

Nate Ellis is a former SEAL and former stripper (because why not, right?). He’s between jobs right now but that’s okay because he’s loaded. At a bar one night, he meets a beautiful, confident and very sexy woman who gives him a little taste of what he loves and then walks away. No-one walks away from Nate Ellis! Besides, he’s had a taste of her and now he can’t get her out of his mind.

And, by a taste, I mean that literally. Here, I’ll let him tell you about it:

I trace the alphabet over her clit, slowly. What I choose to do with my tongue doesn’t matter as long as it licks, flicks and drives her mad. I don’t fight back a single groan of pleasure. She’ll feel each one to the tips of her toes. I let my fingers get in on the fun, fucking her in short fast thrusts.

I repeat O. It’s my favorite letter, and she’s speaking in tongues and trying to squeeze my head like a grape.

Her reaction is why pussy eating is my thing. I can have the kind of dick game that can convert a woman to the religion of me, which is nice and great for the ego. But if I want to see a woman stripped down, animalistic, half out of her mind and like she might be getting a demon exorcised, I eat her pussy like a god.

It turns our the mystery woman is out for revenge. Nate is a love ’em and leave ’em kind of guy. He doesn’t do relationships. He’s not in it for love. He’s in it for the… well, the pussy. He has rules though.

“…but I only ever fucked women who were over the age of 25. I’m not a babysitter or hand holder. If an adult woman, of my choosing and of her own free will, wants to get into my bed, I won’t stop her. Unless she’s broken in some way. I avoid that harder than a woman who wants to settle down.

He is honest with the women he’s with but he’s so very good at what he does, he has a habit of ruining the girl anyway. One of these women, a woman whose name Nate doesn’t remember (he mostly doesn’t remember any names and just calls whoever he’s with “Sugar”), was very hurt by him and the mystery woman wants him to hurt right back.

Her motive was the weakest link in the story. It never really rang true to me. There wasn’t enough in the book for me to really understand her relationship with “Virgin Number Two” or why revenge seemed like a good idea. And, if I’d bought that, I’m not sure I’d have been able to see how she thought it was okay to sleep with Nate at all. That whole aspect of the story really didn’t gel for me. Basically, I read the revenge plot as being the excuse to get them together on the page and nothing more.

However, I did like mystery woman’s relationship with Nate. I enjoyed their banter and the sex was super dirty and wicked hot. There was also a lot of humour and that combination kept me happily reading.

Nate was an asshole but I liked him anyway. I couldn’t help it. And, he was totally brought to heel by his mystery woman. Maybe he didn’t do relationships before, but he sure does now.

The mystery woman is African American but there are no descriptions of her skin in terms of food. She is not chocolate or mocha. Her skin is brown. Hooray.

Also, did I mention the humour?

Don’t believe anyone who says eating pussy is like kissing. If a pussy licks you back, you should run.

There are not enough books where the hero is so worshipful of ladybits. This really should be a whole new trope.