Your fantasy books made my life in middle school.   I was in a precarious reading stage where I just didn’t know what I liked.   Harry Potter was wrapping up, and I wasn’t sure if the fantasy genre was still my thing.   While not every book tickled my fancy, (some were real stinkers) I discovered a copy of Rose Daughter in my library.   I promptly devoured it – because a bubbly seventh grade reader must devour any YA retelling of Beauty and the Beast – and was enchanted.   So then I read Spindle’s End. By then I really couldn’t deny how brilliant I thought you were. 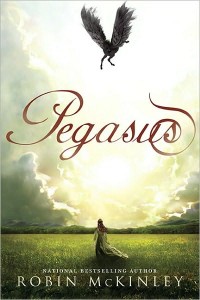 I didn’t get the opportunity to read any of your other work from my library at that point, but I was left transformed by these books.   You’ve written countless others, including the ever famous Beauty, The Blue Sword, The Hero and the Crown, and Sunshine.   While Pegasus wasn’t as strong of a read as my favorite of yours (Spindle’s End), it was a fresh breather for the YA world, and on reception of the companion book next year, will seem a little more fleshed out and complete.

Sylviianel (Sylvi, for short) is a princess.   As a member of the royal family, she is required to have a pegasus bound to her.   A thousand years has seen a treaty between the pegasi and the humans acknowledged, and the binding is an important part of inter-species respect.   Sylvi isn’t keen on being bound.   Her father and his pegasus can speak offhandedly, but rarely understand each other.   Her mother and her pegasus can barely speak simple sentences to each other.   It’s been well known that the pegasi and the humans haven’t had a clear understanding of each other.

The day of her binding, Sylvi is introduced to Ebon.   A young, black pegasus with an attitude, Ebon is wary of being bound to Sylvi.   He’s sure that a girl human would connect better with a girl pegasus.   Tradition is tradition, however, and the fourth child of the human king must be bound to the fourth child of the pegasus king.   Unlike anything that’s been known in remotely understood history, Ebon and Sylvi can communicate.   They can mind speak.

Revealing their ability does not come easily.   They suddenly have more responsibility than ever.   Sylvi is barely twelve, yet her people expect her to understand the pegasi because of her communication.   In truth, she only knows what she does from her studies, and from what Ebon slowly begins to tell her.   What she does know is that the humans and the pegasi don’t truly understand each other.   That they may, in fact, be underestimating the intelligence and abilities of the other race.

This brings Sylvi to the attention of the most powerful magician at court, Fthoom.   A stingy and bold magician, he claims the pegasi and the humans can’t understand each other.   That their friendship isn’t as grand as it seems.   Fthoom could prevent the humans and the pegasi from coming to true understanding, and Sylvi is now in his way with her ability to truly speak to them.

Pegasus is the first half of a story that shows the importance and uniqueness of true friendship, as well as communication.   Can two species really learn to speak to each other past simple sign language and mind speak?   Or will Fthoom destroy the wavering peace between them for his own intentions?

One of your biggest strengths has always been the way you write your main female characters.   They are always strong, whether physically or mentally, and they have an air of maturity about them despite their youth.   Yet it’s believable maturity.   Sylvi follows in this same character tradition, but she’s slightly more subdued than your other heroines.   She has more of a mental process about her.   While not quick and cunning or strong and brave, she knows how to get things done.   Practical.   I was never once disappointed with her choices, and the way she handled things throughout the book was solid.   Readers who find the current YA heroine types trending will be pleased to see a stronger and more able character in the works.

Another character you handle well is Ebon.   For many readers, the impossibility of having a romance between Ebon and Sylvi will be reason enough to try out this book, but there are a lot of complexities about his character.   He’s the rasher of the two, yet he still has his own knowledge and skills that reflect someone ready to deal with these responsibilities.   He’s a good other half to Sylvi.   He dares her to take risks (like flying with him, which is considered highly inappropriate) and to look past the social norms without making a big deal about it.   For something to be so serious for Sylvi, yet to be so simple to Ebon, is a good example of the cultural boundaries you play with.   His friendship with Sylvi is also unique in that it has a slow build that really pays off for the reader.   It’s so well drawn that it’s easy to see the beauty in their relationship.

Since the story is mainly focused on these two, they are the most important characters to look at, but the wealth of side characters isn’t to be ignored.   The way you paint each pegasus as individually as you would a human character speaks well for the book’s themes and for your talent at making wonderful characters.   Each one, from Sylvi’s mother to her wishy washy pegasus Hirishy, has a breadth of emotion and personality that other novels don’t.   Part of it is because the story is so massive, yet another part is simply the way you can work these things into the narrative.

With your narrative strengths come worldbuilding strengths, but in Pegasus your world was built almost too well.   I can tell people how pegasi can fly (their bones are hollow) or how human royalty isn’t a sole matriarchy or patriarchy, and that’s something I love.   I entered the world, I invested my time, and I came out with a lot of knowledge that will stay with me subconsciously until the next book appears.   I loved learning about it, as it was so fascinating and well thought out.

Yet you did it almost too much.   The first few chapters were very large in the information department, and a lot of that was the world’s history.   The rest of the novel was much better with handing out information, but the first few chapters are heavy handed and will deter readers with low attention spans.   The book also ends without much resolution, but that’s not a problem with the writing more so than how the book was published.   Consideirng the second half of this duet is actually the second half of the official book, it’s not a big issue.   I’m really excited to read Pegasus II because of the immense payoff I know I’ll receive upon reading it.   Other than your world building, you know how to write lovely dialogue, and your prose is equally lovely.   Not many writers write with a style that is both fantastical yet so deep realistically, but you pull it off quite well.

Readers who haven’t read fantasy before would not want to start with Pegasus.   It’s a longer novel with a lot of world building and setup, and readers need to understand that going in to really get the experience.   Your characters are wonderful, and I really enjoyed the relationship dynamic between Sylvi and her bonded pegasus Ebon.   The facts of your world will delight and entrance readers, but some parts are genuinely slow because of information or the general easy pace of the narrative.   Pegasus isn’t the best of your best, but it’s still pretty good, and was easily one of my favorite books this year, even if it wasn’t as solid as some others on its own.   I’m so glad to see another facet for teens and adults to read your books in, because reading your books simply brightens my day.   B

→ John
Previous article: REVIEW: Not That Kind of Girl by Susan Donovan
Next Post: Jill Sorenson’s Best of 2010