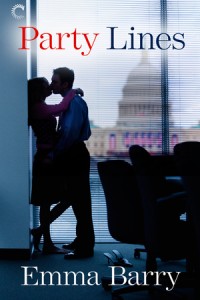 This is one of those books to which I hate assigning a grade. In the past I’ve avoided political books primarily because of the current political climate is so toxic. It feels like as a citizen you vote, write/call your Congressperson and even donate money to candidates but the end result is acrimony and stasis.

Living in Iowa, I am subject to politics nearly all of the time. The midterm elections have barely passed and we already have candidates here positioning for the 2016 presidential election. The cycle of news and politics here is never ending and it’s not like rational debate. It is sound bite, tearing down the other side, and never about actual real policies or change.

The previous two Barry books I read and enjoyed much to my surprise so I had no hesitation starting this one. The two previous books dealt with politics but in such a way that it was more about the people and less about the process. This book is all about the process and it takes place during the Iowa primary season.

Part of why I responded so negatively to this book was, in part, how accurately the book seems to describe the confusing Iowa caucus system and did so in a way that did not make Iowa look like backward hicks (as many coastal authors who depict the Midwest tend to do).

The two main characters are staffers for presidential hopefuls. Michael Picetti is a long time Democrat field worker who has backed a candidate only to find out that he wants to leave his wife for a small time journalist. Picetti and his team convince the Democrat not to withdraw and they’ll cover this infidelity up. Only it’s not just the one, but a string of “ones” that they end up having to overcome. Worse, I don’t get a sense from the book why this man should be president. Picetti doesn’t give me sufficient reasons why his guy should win over any other guy. In fact, Picetti’s reasons for backing his guy is solely because of the guy’s electability.

On the other side we have Lydia Reales. She’s somewhere lower on the food chain of political operatives on the campaign and she wants to be noticed. She has a conversation with Picetti and determines that Picetti looks unhappy and therefore there must be something wrong with Picetti’s candidate. Reales is determined to find the dirt on Picetti’s candidate so that her candidate can win and she can look good.

Mandi at SmexyBooks loved this book and she was right that the romance between the two candidates was fun and tender. Reales, the Latina Republican, actually does believe her candidate is better for the job–at least better than Picetti’s candidate. Gratefully, both characters present a more refreshing side of politics–meaning they disagree without acrimony.

On top of their political differences, which fade in importance as their feelings grow, is that Michael is weary of the road and campaign life whereas Lydia is not. She’s just starting out. She’s fresh, new and excited and full of ideas and Michael wants to settle down and have kids. That conflict seemed impossible to overcome.

BUT! the election, of course, is not about principles. It is about who has the dirtiest secrets and which party can find those and leverage that into a political win. I have to give credit for the realism that is baked into the story. It really does read like it could be the true account of two staffers on Election Road.

Even though the romance is well crafted and woven throughout story, I still read it with one hand over my eyes and the outcome, the end of the political story, made me feel less than hopeful.  It’s well-written, authentic, and the romance is believable but I still didn’t like it because I couldn’t separate my real life feelings and biases from the storyline itself. Still, I’m giving it a B.