“Come forth with an open mind, for an unconventional tale of love..

Dublin native Freda Wilson considers herself to be an acquired taste. She has a habit of making offensive jokes and speaking her mind too often. She doesn’t have the best track record with first impressions, which is why she gets a surprise when her new neighbour Nicholas takes a shine to her.

Nicholas is darkly handsome, funny and magnetic, and Freda feels like her black and white existence is plunged into a rainbow of colour when she’s around him. When he walks into a room he lights it up, with his quick wit and charisma. He is a travelling cabaret performer, but Freda doesn’t know exactly what that entails until the curtains pull back on his opening night.

She is gob-smacked and entirely intrigued to see him take to the stage in drag. Later on, Nicholas asks her if she would like to become his show assistant. Excited by the idea, she jumps at the chance. Soon she finds herself immersed in a world of wigs, make-up and high heels, surrounded by pretty men and the temptation of falling for her incredibly beautiful employer.

In this story of passion and sexual discovery, Nicholas and Freda will contend with jealousy, emotional highs and lows, and the kind of love that only comes around once in a lifetime.”

We get a lot of book submissions to our DA site. I’ve also got more ebooks on my hard drive and print books piled up around my house then I’m ever going to be able to read. So it takes something a little special and different for a book to stand out to me these days. The blurb of your book “Painted Faces” caught my eye and the excerpt sealed it. This was a book I needed to try. 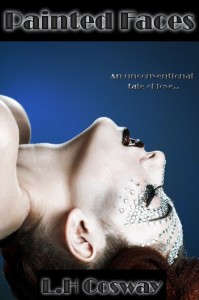 From comments made at our site, I realize that first person narratives are not a lot of reader’s favorite. Me, I love them but I need to like or feel sympathy with the person leading me through the story and/or be able to trust what this person is telling me about the other characters. Freda, aka “Fred,” is a wisecracking, down to earth person who drew me in from the start. I’ve had my own battles with weight so her habit of using humor as a shield and fading into the background to watch and observe those around her makes sense. Her disbelief that someone as charismatic and handsome as Nicholas might be interested in her also rings true. But Fred isn’t a saint and I like the rough edges you’ve given her. She casually swears – fuck is a favorite word – drinks like a fish and isn’t above asking a sorta-friend to events just to pad the numbers. But she’s loyal to those she loves and she’s desperately afraid she’s going to fall for Nicholas even though she knows it will probably break her heart.

Nicholas is the first heterosexual drag queen hero I’ve ever read about but given that description, I doubt there are many other ones out there in Romance Land. He’s handsome, sexy, sensual and hiding a painful secret from his past that makes him doubt himself. His initial interest as a child in dressing up in women’s clothes in order to be close in spirit to his lost mother seems believable as does the reason he’s made it his adult profession – once this is revealed. Freda’s acceptance and enthusiasm for how he makes his living is a major component in his love for her as well as how she deals with what he finally tells her of his past. And while he initially seems to be out of her league as far as looks, I can see how her empathy is a balm to his soul and her ability to make him smile draws him to her. As she says, being in his presence makes her world light up in neon colors while being in hers gives him bright and wonderful sunlight where before it was dark and empty.

I do have an issue with one aspect of the novel and no, it’s not Nicholas in drag. There is someone in Freda’s past who is mentioned early on and who I knew had to put in an appearance sooner or later. Eventually he rears his stalker head and begins to make life difficult for her. Given how Freda describes him and how afraid she seems to be of him even before he shows up again, I found it odd that she would make excuses to herself about how the person a co-worker says was looking for her couldn’t be this person. This just isn’t something to stick your head in the sand about. The way that Freda and Nicholas deal with him is all fine, well and good from a feel-good revenge stand point but from all I’ve read about stalkers, they don’t give up and I found it slightly unbelievable to think that he’s now out of Freda’s life for good. For my fiction, I like to think that things like this are finalized and dealt with as the hero and heroine walk into the sunset towards their HEA.

The book has a serious source of conflict with the lizard brain trumping the thinking brain. Fred and Nicholas each have deep seated issues that won’t go away with a quick authorial wave of the hand. I appreciate that things aren’t quickly smoothed over once they fall in love. In fact, that triggers Nicholas’s insecurities and self hate even more. Time is needed for him to come to grips with his feelings and for Freda to forgive him for what he lashes out and does. But by the end of the book, I’m convinced that each sees in the other The One for a lifetime. B