REVIEW: Own the Wind by Kristen Ashley

I admit I had reservations when I heard that the next Ashley book was  to be Tabby and Shy’s story.  Tabby is the daughter of Tack Allen, the  president of the Chaos Motorcycle Club.  At the end of Motorcycle Man,  Tabby is 19 years old and Parker “Shy” Cage is 24 years old.  I didn’t feel like the Chaos  MC type of stories fit a younger couple.  I should have trusted you. 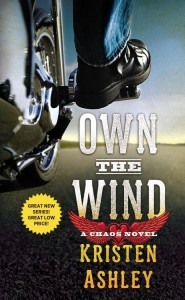 Tab believes she is in love with Shy but he’s too busy enjoying his life as an attractive young man whose good looks and bad boy status cemented by the membership in the Chaos MC makes him nearly irresistible catnip for the ladies.  Tab parties and gets caught up with a less than desirable crowd.  When Shy comes to extricate herself, she points out that the crowd she is with is hardly different than the MC that her father runs and in which Shy is a member.  Shy takes it upon himself to cruelly make Tab realize that her actions aren’t getting her what she thinks she wants.

From then on whatever tentative friendship Tab and Shy had was destroyed and Tab went out of her way to separate herself from Chaos.  Through a series of chapters, Tabby is aged from 19 to 22.  We see  her fall out of love with Shy .  We see her learn  what it is to truly love some one as an adult.  And we see her suffer  loss.  As we cycle through these periods in Tabby’s life, the reader  is treated to Tabby’s coming of age.  She gains independence and  confidence.  She moves out of the protective umbrella of her father  and seeks a different and new life as a nurse.

When Shy and Tabby do get together, the conflict is in part the  acceptance of their relationship by not only Tack and Tyra but also  the club itself.   We also see Tab and Shy negotiate the power within the relationship.

There were a couple of scenes that I found really fascinating.  One  involves  scenes centering around Tack, Tyra Shy and Tabby, we see  Tack and Tyra at odds with the younger couple and the older pair  aren’t afraid to modulate their opinions.  Both Tack and Tyra say  hurtful things to Tabby.  Rarely are main protagonists ever presented  in a negative light in subsequent books.  They are usually only  trotted out for readers to affirm that the HEA is till going on.  That  Tack and Tyra could be presented as doing hurtful things worked  because their response was as a concerned parent.  Plus, it sets the  stage for Tabby to let her independence flag fly.

Another involves a secondary character who is hurt, unintentionally by Tabby and Shy. There is a grittiness to these scenes.  Tab and Shy’s powerful love doesn’t mean  that everyone around them is totally happy.

Secondary stories were set up well in the story.  Because the club  plays such a big role in the conflict, it was natural to include  information about the club including its expansion goals and the  struggle that Rush, the heir to the MC throne, is having with the less  savory aspects of the Chaos operation.

There are a few things that bothered me (and it wasn’t the progression of Tab’s life through a series of short chapters because each one of those advanced the plot but I can see how this might bother others).  Shy is a manwhore, taking two women to his bed at a time but hardly ever remembering their names.  There’s a subtle push that women who act this way aren’t worth having as your old lady (aka significant other).  Given that so many Ashley books are so female positive, I wish there wasn’t this subtle judgment about a woman and her sexuality.   There was also the denigration of other types of men who are not MC members.  We get that those guys are hot.  We don’t need to run down others in order to elevate the brothers.

I think it is a good book for newcomers. If a reader was curious about the series but reluctant to delve into the self published pile, this book presents tighter prose but still delivers the same delicious Ashley romance.   The Chaos MC club is an important part of the story and new people are introduced but older characters are included only to the extent that they play an important role in either Tab and Shy’s romance or set up for future books. Isn’t my favorite Ashley book but it’s a very solid addition to the backlist.  B