REVIEW: Over Her Head by Nora Fleischer 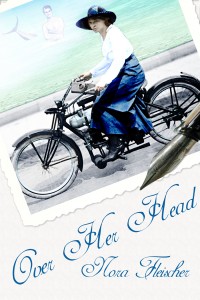 When I saw that the novella you sent to Dear Author for review was published by Drollerie Press, I eagerly snagged it for review. Unfortunately, it’s been a while getting to the review, but I at least hope I can encourage a few readers to try Over Her Head, a sweet, nicely-crafted romance that takes place at the turn of the 20th C and offers a refreshing take on the merman/mermaid myth.

Frances Schmidt is a doctoral student in history in Massachusetts, and her doctoral dissertation is on merfolk. However, there is very little primary research on the subject – except for an enormous collection held privately by one Garrett Hathaway of Ipsiquinguit, Maine. When Frances travels alone to Maine, she does not know what to expect; she is merely compelled by curiosity, a desire not to return a failure to her family in Minnesota, and the need to protect her work from a fellow-grad student, Norbert, who has taken Frances’s topic and is trying to beat her to Hathaway’s collection. What she finds, however, is a relatively young man, a “New Yorker” with a summerhouse in Maine, who has an extensive and eccentric collection of merfolk literature. And, despite the inviting beach right outside his back door, very little sun on his fair skin.

If you’re thinking that Garrett is a vampire, rest assured that he’s not. But he does have a secret that makes him a bit more than the mere mortal Frances finds herself growing more and more attracted to, after, that is, she wins him over to letting her into his library with a tasty plate of homemade spice cookies. A somewhat unorthodox form of scholarly argument, but successful, nonetheless, in gaining her access to a house adorned with almost every iteration of mermaids, mermen, and other underwater decorations, built not by Garrett, but by another fan of mythic sea folk.

Perhaps the popularity of the merfolk stories keeps Frances’s curiosity about Garrett’s extensive collection to a minimum, because she seems relatively content to merely enjoy the burgeoning friendship between her and Garrett, with whom she shares a profound sense of not wholly fitting in to society’s expectations. For both, there is both pain and opportunity in this situation. For Frances, there is a sense of not measuring up to other, more attractive, women:

When she was a teenage girl, she’d dreamed that one morning she’d wake up beautiful. On the day she put her hair up and started wearing long dresses, she’d wished for a miraculous change. For some of her friends, it had been like that. But she was doomed to stay plain, lumpy Frances. And the horrible thing was that she loved just like a pretty girl.

Not that Garrett sees her as dumpy, though, even though at first she appears to him as somewhat “stout” and plain. But as their friendship grows, so does his experience of Frances as a lush, beautiful woman. But his perceptions of himself are less embracing:

And for Garrett, the moment seemed to freeze. The beautiful summer’s day, the happy picnickers, the distant brass band faded away until he was confronted by the face of the only living human being who had ever seen his true shape. He had always known how fragile it was, his life – music, the law, all his pleasures, everything that made him more than a beast in an aquarium. He would lose it all, despite his caution, because he wasn’t really human.

A substantial part of the charm of Over Her Head is the earnestness of both Garrett and Frances, the genuine interest they have in each other and in doing their best to live good, fulfilling lives. There is a real quaintness to the story but also a touching sensitivity around how vulnerable loving and being loved can make one feel. As Frances comes to understand it, “the mermaid stories represent the uncertainty of love, the natural fear that results from unbosoming oneself to a new lover. He is strange to one, as one is to him. But perhaps, if we are fortunate, there may come a mutual understanding.” And here is the significance and Frances and Garrett’s story and the movement of the novella.

Frances stands out, first as a female doctoral student in history, and then as a woman alone in a small Maine town that includes some who might not be so keen on a single woman so openly enjoying the company of a single man. Garrett has made an effort to blend in as a respectable lawyer who had enough income to afford a summerhouse at the beach. But he is hiding his second nature from the human world, convinced that he is tainted. Neither Frances nor Garrett believes that love, marriage, and children is likely (possible, even), and despite their obvious compatibility, something happens between them that threatens any future happiness they might share as a couple. Something that puts Frances’s degree in danger, as well as Garrett’s well being. And its resolution depends not on magic or fantasy or fate, but rather on the willingness and ability of these two people to find that place of mutual understanding.

And this is what I really like about Over Her Head – that it is ultimately a very human, very humane, story about two people, neither of whom is precisely “normal,” in society’s understanding of human terms. It is sweet, it is charming, it possesses and innocence and an exuberance, as well as a sense of hopefulness that I found touching and uplifting. I wondered why a scholar like Frances was not much more curious about Garrett’s interest in merfolk (or at least in the extensiveness and originality of his collection), and I felt that some of the secondary characters (particularly Frances’s landlady in Maine and her rival in grad school) were a bit stereotypical. And I don’t know if it is the limits of the novella or the crafting of this particular work, but at times I felt there was a polite distance from the emotional depths of the characters that may have been appropriate for Edwardian propriety but not so much for the passionate nature of the story’s protagonists. But in the main, I really enjoyed this novella and hope that others will, too. B.

This book can be purchased at Drollerie Press in ebook format or other etailers.