I keep meaning to try more self-published books, but I admit I get overwhelmed by sheer amount available. There’s so much out there that I just don’t know where to start. I have no idea how January does it. But when you offered your novel up for review, the premise and excerpt caught my interest and I decided to give it a try. For my first foray into the world self-published YA novels, this was a good place to start. 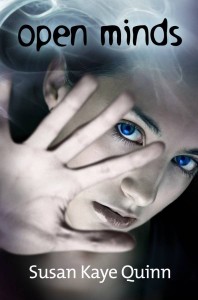 In a future where everyone is telepathic, Kira is a zero — someone who can’t read other people’s minds and someone whom other telepaths can’t read. Obviously, this makes her an outcast. Now not all hope is lost. She could simply be a late-bloomer but the days pass without Kira changing, she’s coming to accept the fact she may spend the rest of her life as a zero.

Zeroes have a hard lot in society. Very few people trust them. After all, how can you trust someone you can’t read? What’s more, Kira has to kiss any chances of her relationship with best friend, Raf, changing into something more goodbye.

Then one day a mishap lands her in the lap of a high school senior named Simon. Literally. As a result, Kira learns the truth. She’s not a zero at all. She’s something else entirely: a mindjacker — someone who’s capable of controlling other people with her mind.

I enjoyed this book a greal deal. The plot was packed full of action and kept moving. It didn’t take the route of girl meets boy, falls in love at first sight, and holds hands with him for the rest of the book. There’s plenty of stories like that out there already, and I’m definitely up for something different.

I liked that Kira wasn’t solely focused on one guy. It’s obvious that she really has feelings for Raf but she feels like circumstances make it impossible to be with him, to even take that chance and see if he’d like to be something more. First, she’s a zero while he’s the reigning high school soccer god. Then, she’s a mindjacker who has to keep that fact a secret. Three generations ago, the first readers were rounded up into camps when the trait started showing up in the general populace. It’s not unreasonable to think they’d do the same thing to mindjackers, who appear to be a mutation of the original reader gene.

Kira’s conflict with Simon is genuine. She has feelings for Raf but feel like she can’t be with him. So here comes Simon, who knows what she is and can teach her how to use her gift. He’s a senior and he seems to like her, which can be flattering for a girl who up until now was a zero, considered invisible by everyone around her.

That said, a part of me wishes there were more interactions with Raf after Kira realized she was a mindjacker. And when I say that, I mean interactions that did not involve Raf being jealous of Kira’s relationship with Simon. They were best friends, after all.

Overall, I think the portrayal of the world was the best part. It’s kind of creepy to imagine a place where you could read anyone’s mind, provided you were within distance. The thought of completely silent classrooms because teachers would plug the lessons directly into students’ minds makes me shudder just a little bit. Plus, there’d be no secrets and gossip would spread even faster, supported with mental visuals from witnesses.

I think this book is a good choice for readers who want a YA novel filled with action and focuses less on introspection and tortured relationship. It is a science fiction novel versus a paranormal, but we still could have gone that way easily. It didn’t though, so readers wanting a change of pace may want to give this a try. B