REVIEW: One Real Thing by Anah Crow and Dianne Fox 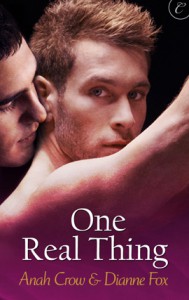 I’ve had a hard time writing this review. I made it a Recommended Read for January and it’s been a best-seller at Carina since it’s been out. But it’s such a subtle book, so simple and yet so complicated, I’ve been lost for what to say about it. This is a book that needs to be read at least twice, to see how subtly the motivations of both characters are layered (the academic in me wants to say imbricated, but that’s just pretentious) into the early chapters. I really liked this book, really enjoyed the characters, and was fascinated by their relationship. But I’ll be honest, the first time I read this, I read the whole thing wondering, “OMG, how are people going to take this?!”

Nick has the perfect life in New York. He’s a successful journalist, finishing up a story uncovering the manipulative adulteries of a female Senator’s husband. His wife and he muddle along well together, each focused on their own pursuits, but still a couple. The one fly in his ointment is that a friend of his, Rick, insists on sending him tabloid stories about their mutual college buddy, Hollister Welles. Holly’s life is imploding publicly and dramatically: broken engagement, drugs, descent into the depths of depravity. Eventually Nick can’t take it anymore and, after a particularly bad story with a picture of where Holly is staying, Nick flies to LA on no notice, lying to his editor and his wife, and drags Holly back, literally by the hair at one point, and forces Holly to put himself back together. He finds him an apartment, gives him rules — no alcohol, no drugs, no meaningless sex — and watches over Holly while he detoxes and figures life out.

I don’t want to give away why Holly was purposefully self-destructing, but it’s a good reason, if devastatingly sad. At first, he’s not quite sure himself, or he won’t let himself figure it out, so the reader discovers it as he does. Which is one of the reasons that the book really rewards multiple reads, because the reader can go back and find the hints that seemed to be throw-away lines. Holly is a lost soul who insists on losing himself more, but after Nick’s intervention, he figures things out, finds himself, and jumps into life with a fervor and a joy that’s wonderful. That’s just the first half of the book. And although Nick and Holly are intensely aware of each other physically, they are just best friends, just college buddies looking out for each other.

Except, of course, they’re not. Not emotionally.

Then Nick’s life crashes around him and he doesn’t know how to put it back together, just like Holly at the beginning of the book. And Holly does exactly the same thing for Nick that Nick did for Holly: gives him a safe space and the reason to figure things out. One of the things Nick realizes as he patches his life back together is that all he’s ever really wanted…is Holly. Part of Nick’s implosion is his marriage implodes too, so Nick and Holly are finally free to explore the until-now ignored sexual side of their relationship.

Two things are important here: I love how both Nick and Holly are bisexual. Neither of them really mention it. They never make an issue of it. It’s never discussed or politicized. It’s just there. It’s who they are and there’s no angst about it. They’re both bisexual and that’s that.

There was something about seeing Holly on his knees, about Holly kneeling for him, that warmed Nick from the inside out.

Holly leaned into the touch, closing his eyes. When he looked up, his expression was hopeful. “May I please have some coffee?”

Holly could’ve been asking to suck him off, the way Nick’s body reacted to the question. God, he didn’t even know-No, he hadn’t known. He’d thought his responses to Holly’s obedience were only because he’d wanted to make sure Holly was safe. But he’d been lying to himself. He could see that now. He wanted that all the time, wanted to hear Holly ask so sweetly for the simplest things. “Yes, you may.”

And again, in typical fashion for these two authors, it’s not a Big Deal. It’s how and who these characters are and how their relationship fits and works for them. Nick could not have saved Holly if Holly had not instinctively followed orders because of his submissiveness to Nick. Holly could not save Nick if it weren’t for Nick’s instinctive dominant response to Holly. It just works for them. But try explain to someone that Nick feeds Holly and tells him whether or not he can have coffee in the morning, without them having read how well it just works for both characters, and it just sounds wrong and borderline abusively controlling.

Holly’s blue eyes were so wide and innocent and trusting and free of guile. This could have been something degrading or controlling, but it wasn’t, it was right, and everything about Holly said it was so.

So while I spent most of the book running around in my head crying “What will people think!?” I came out of it convinced that people would think that it’s a relationship that works, a love that makes both characters so much stronger together than apart. Despite its unconventional nature, isn’t that what love’s supposed to be about?

Niggles: the wife is a little too Evil Witch, a little too strident. At times the book is a little too spare, the timeline a little too chopped up. More details and more time with the characters having time with each other would have been good. We repeatedly see only one scene, maybe two, out of an entire week, and sometimes it’s not fully clear exactly how much time has passed and what the characters did with that important time. This makes the story confusing occasionally, which is never a good thing.

But the cover is wonderful. While Holly’s hair isn’t long enough, I don’t think, from what you say in the book, the pose and his eyes…innocence and “I dare you” and knowledge and pure sex. Just perfect. Well done, Carina.