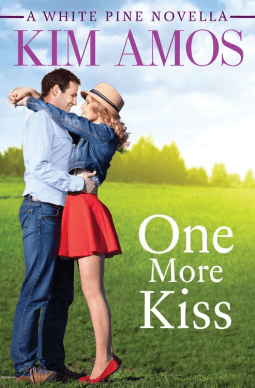 ONE MORE KISS . . .
Betty Lindholm doesn’t know whether to laugh or cry. The banner advertising the new shipment of satin at her fabric store finally arrived and now the entire town of White Pine is up in arms. How was she supposed to know there’d be a typo? Now the entire town thinks she’s proclaiming “Satan is here!” Even the gorgeous pastor with his steel-grey eyes and sexy smile . . .

. . . IS NEVER ENOUGH
Pastor Randall Sondheim is always on the lookout for excuses to drop by Betty’s shop and gaze into her lovely blue eyes. The latest is her crazy sign-could that be a sign of something more? Sweet Betty brings out the best in him but it’s the worst in him, his dark secret tragedy, that worries Randall. Can this man of God conquer his own demons to win a match made in heaven?

The cuteness of the blurb grabbed me: Satin and a pastor. The first chapter threw me a little, until I realized that it was taking place now and the main section of the novella would be a flashback. The number of characters was also a worry as I quickly realized this is part of a series but in the story, they were introduced slowly thus avoiding character dump. I noticed a few typoes – missing or added words in a sentence, a few misspelled words but hopefully these will be corrected in the final version.

It might be about pastor but let me tell you, this is not an inspie. The first tip off is the language that Betty has used to tell off sign idiots and the appreciation she has for Randall’s ass. And Randall has been seeking way to make his move. Whoohoo and he appreciates that Betty doesn’t immediately either become holier-than-thou or fake faux saintliness. He’s a beta guy trying to nerve himself up to asking for a date but he’s also a pastor and can’t afford to screw up. Something that is being hammered home to the reader. Some Deep Dark Secret lurks in Randall’s background. Actually more than one. And he uses worty dirds to himself.

Friends to lovers? Only after finally loosening up over a few years since his arrival and because Betty and Randall have worked together a lot on Church issues and fundraiser. Though now Randall has the stone-face thing going again after Betty thought he might be ready to kick things up a notch. Did she misread his intentions?

The town’s overreaction to the sign would be comical if it wasn’t a small town – the type that rumors just fly through – and other issues hadn’t already been occurring. I love that Betty is a good businesswoman who can formulate and put a plan into action quickly. That it involves Randall is just incidental. Really.

Most of Betty’s great circle of friends think he’s interested. Heck, one knows he is because he squeezed her for info. Betty might have not been a pretty, popular girl but she’s fairly confident now, has great friends and a business and isn’t in a panic over her bio clock. Still, old hurts come back to sting and it takes her female friends to buck up her courage.

When Randall confesses his secret to Betty, wow, it’s a doozy. Definitely not all in his head or making a mountain out of a molehill. He really does have a legitimate reason not to give into the desires of two consenting adults. Gotta give Betty props for standing up and saying what she wants and that she’ll settle for nothing less. You go girl. Randall fesses to himself that he’s loved her for many reasons for months. That she’s one of a kind and he likes that kind. Can he (finally!) screw his courage to the sticking point and risk feeling that much again for someone? Letting go and taking a chance?

Randall’s “Come to Jesus” moment arrives perfectly based on the plot so far and his reaction to it is epic, biblically epic – but then he’s a pastor and can recognize when that occurs. He also gets the chance to defend the woman he loves and he rises magnificently to the occasion. He is a tower of strength and determination and quite nicely puts someone in their place yet doesn’t completely cut her down. Then he turns this situation into an opportunity. Well, two of them actually and I’ll give him style points for bravery as he lays it all out on the line and publically too. The sex scene that follows definitely puts this one out of the inspie category but I’m applauding the fact that this book shows that Christians like sex too. I am so glad I decided to take this one for a spin. B