I confess.  This book made me teary at the end.   I think it was because I became so attached to Gabby Wade and felt like she really deserved a happy ending. 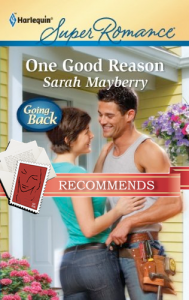 Gabby Wade fell in love with her boss, Ty Adamson.   They actually dated for three years but Ty could never commit to her.  And then he falls in love, get married and has a kid on the way.  Of course Gabby goes through a period of “why not me”.  It wasn’t so much that she loved Ty and mourned his loss, but she wondered what it was that allowed Ty to reach through the commitment barrier with someone else, but not her.  (I wondered that myself as I didn’t really love the heroine that Ty was paired with Ally in The Last Goodbye).

Gabby doesn’t quit her position at Ty’s furniture manufacturing plant. She loves her job, plus she has ownership in the firm itself.   She’s not really pleased about Ty bringing his brother, Jon, on on board without even giving her a heads up.  (As an aside, I felt like Ty treated Gabby poorly throughout the book.  He doesn’t consult with her about much of anything.  He doesn’t know how overworked she is and how much of HIS business she actually runs. He expects Gabby to be BFF with him still, even after he has married some other woman.  He’s myopic and insensitive at best and just selfish at worst. All I could think of during this book was thank god I’ve already read his book).

When Jon Adamson returns home to Australia to put his dead father’s affairs in order, he’s unsure of himself.  He’s always felt like an utter coward having left home as soon as he was able and leaving  Ty to deal with their father’s alcoholic rages.  Because of this, he is unsettled by Ty’s friendly overtures and snaps at Gabby at nearly every turn. Jon also begins to recognize he has a real drinking problem.  Not drinking, ashamed of himself, Jon seems to take it out on Gabby.  Yet, Jon is the only one in the story that really sees Gabby.  He sees the hurt that she tries to disguise seeing Ty and Ally together. He sees that she is overworked.  He sees that she’s entering a dark place.  Maybe he sees all these things because he’s in a dark place himself.

Jon isn’t very nice to Gabby in the beginning but I thought you did a good job of showing us that Jon wasn’t ready to be with anyone in the beginning of the book. He didn’t like himself much.  And this becomes a great source of conflict between Gabby and Jon (and the point that I really became emotionally engaged at a deeper level).  Gabby and Jon fall for each other but Jon holds himself back.  He can’t let go because he doesn’t believe he deserves it and because he doesn’t think Gabby could truly love him if she knew about this past.  He wants her to love him for who he is now. He wants that to be enough.  But it isn’t enough for Gabby because she’s already been with someone (Ty) who couldn’t make that deep commitment to her.  I loved Gabby for really sticking to her guns and saying that she deserved more.  And yes, I did buy into the fact that Jon grew into the man that Gabby deserved because he put her first.

I did feel like the transformation happened a bit too quickly; that the emotional problems Jon had to work through required more than just talking it out with Ty and Gabby.  Jon and Ty both could have used a little therapy.  (Ty because he’s just a myopic jerk at times).  B