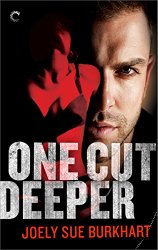 I’ll admit when I first started this book I didn’t think it was for me and I hadn’t even reached the gritty love scenes yet. The book opens with the two protagonists–Charlie MacNiall and Ranay Killian meeting yet again at the vet clinic where Ranay works. Charlie is bringing in his King Shepherd and Ranay is the receptionist. Charlie mentions that he needs someone to watch his dog for one night.

There’s an awfully quick jump from Charlie agreeing to watch the dog to an intense offer of … something from Charlie to Ranay. The thing is that Ranay is a masochist with no limits. Her overwhelming desire in life is to serve one master. She is still recovering from the fall out of her last relationship where her need to serve drove her master to leave her because it was “too much responsibility. Too creepy.” She knows Charlie’s a dominant. She senses it in the way that he moves around a room, controls his dog, and in the tenor of his voice. But, as Charlie points out, when she gives of herself, she gives all the way and can’t hold anything back.

She latches on easily and gets crushed because of it.

“I couldn’t date in high school without ending up a basket case because he looked at someone else or blew me off at lunch. I just can’t handle casual dating and flirting. It got worse in college. I experimented and found that I like an edge of danger. I ended up falling for a guy who’d been kicked off the football team. My family hated him. They were afraid he’d beat me up or even kill me, but he wouldn’t hurt me a little.”

I shook my head, tears of shame filling my eyes.

Charlie is an unusual hero in that he is described as mild looking, average height. Ranay isn’t attracted to what Charlie looks like, but who he is. (I admit to upsizing him in my mind. I’m shallow like that).

There’s a suspense element that is layered into the book and the activities that Ranay and Charlie enjoy are scrutinized by the law. The FBI is looking for a serial killer, one who preys on victims and gets off an eroticized sex play similar to what Ranay enjoys with Charlie. In some ways, the mystery presents itself as a gothic. Is Ranay the foolish virgin running toward the house with the killer? Or is she merely misunderstood? Is Charlie really a good guy or someone setting Ranay up for a terrible, gruesome end?

Despite the romance conclusion, the end of the book leaves many questions, not the least of which is what about Ranay’s family? There’s a second book in the series and I’m hoping to get some closure to Ranay and Charlie and what happened to them after the end of the book.

I do recommend this book for those who like their romances with a little bite. (pun intended). B