REVIEW: Once Upon a Dream by Jennifer Archer

Can the answer to her curse lie in the dreams of the past?

When Professor Alex Simon moves to Canyon, Texas from England, he welcomes the opportunity to change his locale. Not only would he be aiding his recently widowed sister, but he would have a chance to forget a failed relationship.

Robin Wise is less than impressed by her new neighbor– and his little devil-cat. The feline taunts her dog, and its stuffy owner has the gall to blame her pup for the squabbles. But at a second glance, Alex isn’t quite as nerdy as he seems. As a matter of fact, when he isn’t insulting her dog, he can be quite charming.

But Robin has her own problems. An inherited curse looms over her impending thirtieth birthday, and until Robin can overcome the hex, she can’t indulge in any fantasy she might have regarding the more-perfect-by-the-minute professor. No matter how she wishes she had the courage to act on the awakened desire in her heart.

I think if I’d read “Once Upon a Dream” when it was first released in 2001, I would have had a harder time believing in the heroine and her paralyzing fear. But since then, I’ve read Julia Quinn’s “The Viscount Who Loved Me” which features a hero with a similar fear plus there’s now the show “My Strange Addiction” to show just how much people really are controlled by things the average person might not otherwise understand. 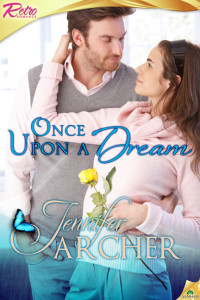 When I initially saw the blurb for this book, I will admit that I was sold after the second paragraph about the dog and cat stuff and didn’t really bother to read the rest. But the first chapter lays out Robin’s issues as well as those of Alex. He has trouble trusting in relationships given how his mother spent years talking bad about him and his ex-fiance spent all her time treating him as a DIY fixer-upper project. I liked Alex’s slightly nerdy persona and felt good for him that he stood up to being twisted into a person he isn’t. Meanwhile, Robin is facing her imminent 30th birthday, firmly convinced that she’ll never live long enough to celebrate it. Three previous generations of women, her mother, grandmother and great grandmother, all died within days before they would have turned 30 – all from freak accidents. For the past year Robin has holed up in her house, never going beyond the edge of her property for fear of what might happen.

Alex wins me over from the start when he doesn’t ridicule Robin for her agoraphobia – but is this truly agoraphobia? – even before he knows what the fear that controls Robin is. He doesn’t try to fix her or change her or bully her out of this which makes sense given his own past. He sees how tight a hold this has on her and works with her up to and including being in the path of a tornado. I do have to say that Canyon, Texas gets over their brush with bad weather faster than a lot of towns in the South have over the past two years.

I’d never heard of the beliefs you mention people having about butterflies and people’s souls. Or about a lot of the superstitions that Robin’s Uncle Ethan has spoon fed her over the years. But the synchronized dreams that Alex and Robin share are my favorite parts of the book. The way the dreams flow and incorporate what happened to them that day plus the anachronistic touches such as historical western gambler Alex passing Robin’s abandoned Honda Civic as he rides his black stallion to her rescue or the town saloon suddenly having a jukebox which then plays Willie Nelson’s “To All the Girls I’ve Loved Before” as Robin appears in the doorway are hilarious.

The slowly developing relationship between Robin and Alex is sweet as he helps save her roses from black spot after which she introduces him to the fine old tradition of listening to Country and Western “cry-in-your-beer” songs, except all she has is milk which goes fine with the cookies he brings her. Heroes who bring chocolate cookies are boss. They tease each other and laugh together which always bodes well for the future. They’re also frank and honest with each other such as when Robin critiques the way Alex ended his relationship with his fiancee before she opens up and tells him the real reason she’s housebound. Then comes the sex which is also open, honest and unabashed in the way they enjoy being together. I laughed my ass off when they both put their glasses back on in order to be able to openly admire each other once the clothes were on the floor.

What will stick with me about Robin and Alex is neatly summed up in this passage from the book.

“…you’re probably the only woman I’ve trusted since I was a very young lad.”

“I trust that you’re honest with me. That you don’t play games. That you accept me for who I am.”

I might still need to look up butterflies and souls in order to satisfy my curiosity but you’ve convinced me that Robin and Alex are meant for their HEA. B