REVIEW: Once and For All by Jeannie Watt

I didn’t know what to expect when I picked this book to read, particularly given that the heroine was a lawyer. I almost never read books about lawyers because most authors take such liberties with the profession that I cannot suspend my disbelief. For the most part, though, the heroine’s career was portrayed accurately and it did not turn out to be a stumbling block to my enjoyment of the story. 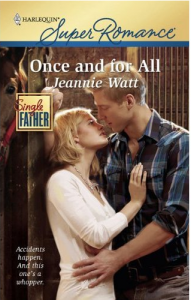 Jodie De Vanti, a lawyer from Las Vegas, is taking over the ranch for her father while he is vacationing with her mother. Jodie has always struggled for her father’s approval. The senior De Vanti was a superior businessman and he expected his daughter to achieve similar success in every endeavor. It was success or disappointment for Joe Barton. I thought this paragraph summed up their relationship nicely:

“High school. I played varsity for three years." Joe had been disappointed it hadn't been four. When she'd made the JV-‘junior varsity-‘team as a freshman, she'd been proud, since the competition was fierce, but immediately realized that her father had expected more. She'd worked like crazy that year and over the summer to make varsity, and had been rewarded with a proud father. And when she'd won MVP-terrifically proud father.

The problem is that Jodie’s father is an asshole (if you hadn’t guessed by that paragraph) and no one wants to work for him. While Joe is vacationing, their all around helper quits. Some of the cows are going into early spring labor made all the more difficult because Joe chose to breed his cows with a huge black bull making the calves bigger and calving far more difficult. Jodie needs a ranch hand and she needs a vet who can help her. The vet is just one more of Jodie’s little problems, thanks to Joe.

Joe sued the nearest Vet, Sam Hyatt, and no one near the ranch wanted to place themselves in Joe Barton’s crosshairs. Joe had gotten to the point of flying someone from Las Vegas into the ranch but even that vet was unavailable to Jodie. Unable to sit around while animals are suffering and in need of the money, Sam eventually gives in to Jodie’s pleas for help. And the more time that Sam spends with Jodie, the more he likes her. His attraction to Jodie, though, serves as a reminder of how his personal life has been very lonely.

Sam’s beloved brother and his brother’s wife were killed in a car accident with a drunk driver leaving Sam the guardian of twin teen boys. Sam doesn’t know how to parent, feels a tremendous obligation toward his brother to ensure that the boys turn out right; but at the same time feels a keen sense of longing to have a partner of his own.

The teen boys are well portrayed. They weren’t grief stricken but neither were they perfect. Together they tried to encourage Sam to have a social life so he would lighten up on them, at first trying to get Sam to go out with Jodie and then turning on him when some information about Jodie came out that they didn’t like. Jodie didn’t turn out to have any insta-parenting ability either which made the dynamic between the four seem more believable.

The love between Jodie and Sam grows slowly but naturally. Jodie has some good reasons to shy away from a relationship with Sam but Sam is persistent, once he thinks that he and Jodie would be good together. I liked that Jodie began to realize that her idolization of her father was unhealthy given his demands of her and that her father never really changed. Not everyone’s problems were solved by the close of the book. This helped to offset what I found to be an unnecessary epilogue and a kind of abrupt ending. While the sexual tension between the two was nice, I would have liked to been privy to the consummation scenes in more detail. That said, this is a good contemporary romance between two adults that didn’t rely on a higher concept other than falling in love to provide the conflict in the story. B