I think it was Angela James who told me to read this book. We’ve both been glomming on as many New Adult books as we can, mostly from the self published ranks. On Dublin Street isn’t necessarily Mature YA or New Adult or whatever we are calling it, but it has a similar feel. It’s written in the first person and features a just graduated college student living in Scotland. 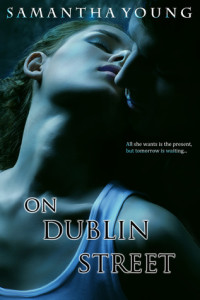 Jocelyn Butler is an orphan, having lost her family when she was a teenager in a terrible car wreck. Shuffled from foster home to foster home, she’s hardened her heart and allowed herself no close connections. After high school, Joss moved to Scotland to attend the University of Edinburgh where she has lived ever since. One of my major complaints is that little of the Scottish atmosphere is provided here. There are hints here and there, but I felt that the story could have been moved anywhere – to Australia, California, England – and the story would have been the same.

After her roommate and closest friend Rhian moves to London, Joss looks for a new place to live and falls in love with a high end luxury flat. Joss hasn’t touched much of the money she inherited, feeling it is tainted by the loss of her family but decides to dip into her fortune to pay for her share of the flat.

Her new roommate is Ellie Carmichael, a PhD student, whose brother (and owner of the property) is Braden Carmichael, a wealthy developer in Scotland. Joss initially resists Braden’s advances, dismissing him as a wealthy playboy womanizer. However, after weeks of trying to tamp down their mutual attraction, Braden offers a no strings attached, friends with benefits affair. Joss relents but attempts to keep as much distance as possible from Braden, emotionally.

The reason that Joss and Rhian were such good friends was because both of them had painful pasts and neither pushed the other for more than a superficial friendship. What Joss did not realize is that the time spent with Riann created a deep connection. In spite of all her efforts to hold herself aloof, Joss really cares for the people in her life. Riann, Ellie, and Braden become indispensable to her emotionally but she realizes it almost too late.

Braden and Joss have a meet cute when Joss hails a cab to take her to Dublin Street, the location of the new flat. Braden hustles her into the cab saying they’ll share the cab:

“Good.” He pulled the door open. “I’m heading in that direction, and since I’m already running late, might I suggest we share the taxi instead of wasting ten minutes deciding who needs it more.”

A warm hand touched my lower back and pressed me gently forward. Dazed, I somehow let myself be manhandled into the cab, sliding across the seat and buckling up as I silently questioned whether I’d nodded my agreement to this. I didn’t think I had.

This is Braden. Totally in command. Pushy. Refusing to take no for an answer. If this type of guy is unattractive to a reader, this book is not for them. However, Braden appealed to me and to Joss. Someone less assured would have never been able to break through Joss’ barriers. Someone less persistent would have given up after her second no. Or maybe her third. Someone who was less intense wouldn’t have burned so fiercely for Joss and thus would never have pushed her so hard.

This book had some funny dialogue, some amazingly hot sex scenes, and emotional drama.  Did I mention the amazing sex scenes? Let’s combine some of these in a little excerpt:

Hard to tell with you sometimes. Speaking of hard…

I was caught between laughing and scowling. What did he mean it was hard to tell with me sometimes? Deciding it best to let it go, since he was joking again, I text back … wood floor?

OK, you just took the sexy out of it.

or (and this is a bit salty so I’ll put it in spoiler quotes:

[spoiler]“Just for that, I expect you to wrap that dirty mouth of yours around my cock tonight.” He narrowed his eyes on me.I felt the impact of those words as they pebbled my nipples and soaked my panties. Despite my body being completely turned on, I was floored. I couldn’t believe he’d just said that to me in a fancy restaurant where anyone might overhear. “Are you kidding?”

The sound of someone choking brought my head up. Our waiter had descended on us just in time to hear those romantic words and his rosy cheeks betrayed his embarrassment. “Ready to order?” he croaked out.

“Yes,” Braden answered, obviously uncaring he’d been overhead. “I’ll have the steak, medium-rare.” He smiled softly at me. “What are you having?”

He took a swig of water. He thought he was so cool and funny.

“Apparently sausage.” Braden choked on the water, coughing into his fists, his eyes bright with mirth as he put his glass back on the table.

I found the ending to be a bit melodramatic and I could have lived without the epilogue.  I liked the secondary romance between Ellie and Braden’s best friend.  There is some weird formatting issues and some typos but overall I thought it was a very polished product.  I definitely want to read more.  At $3.99, it’s a satisfying, emotional, contemporary romance.  B