REVIEW: Noelle in His Heart by C.E. Kilgore 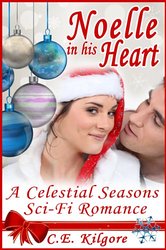 Note: This is available separately or in the “Nebula Nights” collection.

Noelle has made the same wish for the past six years to the angel on top of Father Nathan’s Christmas Tree. All she wants for Christmas is someone with warm arms to hold her and who can understand that she has commitments – commitments which include the twenty-six children at the foster center she volunteers for.

Stranded on Earth six years ago, Steve and his crewmates have done a pretty good job of secretly finding a place in human society, but it doesn’t erase the loneliness that hits hardest around the holidays. He longs for companionship and someone who will understand that his alien heart can love just as deeply.

I had no idea what to expect when I started this novella. There was a short synopsis on Amazon which I misread to think that the hero here would be a cyborg which lead me to want to discover how he’d fall in love. Turns out he’s not a cyborg but part of an alien crew which crash landed on Earth six years ago.

The story starts with something we’ve unfortunately become used to – at least around where I live in the US. Namely Christmas carols piped through store sound systems which after seven weeks of hearing, you’re more than ready to wait another ten months for them to start again.

At first it’s not entirely clear who this group of people are who have a business decorating stores and businesses for various holidays. Soon subtle clues begin to emerge as references are made to “Earther” traditions and blending in. Blending is very important because everyone knows the cautionary tale of what happened to the fool Bruskian who flubbed up and revealed Velcro to the inhabitants of this backwards planet and got snatched up by government men, never to be seen or heard of again. ::Shudder::.

Steve and his other crewmates have been here long enough to not make too many verbal blunders and to have started to feel at home. He longs for companionship but as the only one of his kind here, he’s been resigned to being alone. Perhaps he’ll resort to the special hallucinatory medication they can administer which will induce Earthers to believe memories are only bad dreams. That is until he sees Noelle and feels as if he’s been hit by a stun gun of love.

Noelle is attracted to this handsome, kind, shy man who eagerly volunteers to help out at the orphanage Noelle came from and tries to help in her spare time as an art teacher. She knows what the orphans go through during the holiday season and does her best to make the time memorable for them. Usually the men she’s dated quickly disappear when her devotion to the cause becomes clear and she can hardly believe Steve and his friends are still sticking around.

The romance here is full on while the SF stuff is sketchy. Since our aliens are trying to blend, there’s just enough to explain how they got there, why Steve has two sets of eyelids and that they have no hope for rescue without getting caught up in pesky details. This works just fine for me as I was enjoying Steve and Noelle so much. The light speed acceptance with which Noelle greets Steve’s admission of his alien origins more or less works since Noelle has already fallen hard for Steve and he for her. He’s listened to her, accepted her involvement at the orphanage and is generally perfect. What’s not to love?

I did like that in the end, the crew actually did have a chance to be rescued and made the decision that Earth is now home. There’s also a surprise at the end which tickled me. So perfect (he’s an alien so he can be), shy hero meets sweet, darling heroine –> twue lurve. Aaah, they’re so cute! And I’ve already bought the next novella in the series. B