REVIEW: No One Left to Tell by Karen Rose

I don’t know exactly why I stopped reading your books. I used to love them and recommend them to readers frequently. It may have been the move to hardcover but whatever the reason was, I don’t think it was related to your writing. “No One Left to Tell” is an exciting, action filled romantic suspense story that centers around the alleged wrongful conviction of an innocent man. Ramon Munoz, the gardener for retired Senator James McCloud,   was convicted of murdering a young blonde woman on the estate of the retired Senator. While Munoz maintained his innocence, his alibi that he was at a bar drinking with a friend was broken when the friend and the bar owner testified against Munoz. His wife, Elena, never stopped believing in Ramon’s innocence but her pursuit of the truth gets her killed in dramatic fashion after being shot in the head by a sniper bullet. 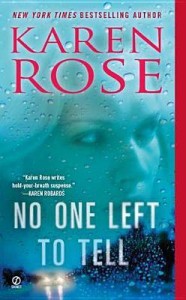 Paige Holden is present at the scene and is given something by Elena with a whispered warning that “cops” are involved. Paige moved to Maryland to get away from bad memories, her well intentioned but suffocating friends and a lurking danger in Minneapolis. She is a PI in training with Clay Maynard who had suffered his own tragedy when his partner was killed a year earlier. Clay is not the main male protagonist. Instead it is Grayson Smith, a State’s attorney, who prosecutes violent crimes and was the prosecuting attorney in the Munoz case. Grayson is a legendary prosecutor with one of the highest conviction rates and he later learns that he was part of the manipulation around the conviction of Ramon Munoz.

The cast of characters is huge and somewhat extraneous. Clay, for example, is a bridge between previous books and a set up for a future one but the role he played in the book was inconsequential. There were times that he was even forgotten in scenes. In one particular scene, Grayson, Paige and Clay were all at a table together, discussing a matter and Clay didn’t say a word and was not referenced despite paragraphs of dialogue exchanged between Grayson and Paige.

The action is fast past and the time frame compressed. To make the romance believable, Grayson and Paige experience an instant attraction. The danger posed to the female main character places the two in close proximity for the entirety of the story. The lust thoughts seemed inappropriate at times and often crowded out space for other concerns such as why people were dropping like flies around them. There is a certain level of unbelievability in the story but because the action is so intense, while the reader is immersed in the story, none of that matters.

There is enough relationship conflict to appease romance readers brought on by Grayson’s belief that a passionate affair with Paige is all he can handle and Paige’s determination to not become intimate with anyone who she doesn’t feel there is long term potential. While past Rose books may have focused more on the mystery, this one had a fair balance between the romance, sexual attraction, and the mystery. Unlike some romantic suspense stories, the bedroom door is open.

As for the mystery, the pace at which the conclusions were uncovered by Grayson and Paige were generally in keeping with the rate of the clues. I appreciated the few red herrings designed to confuse the reader and there were only a couple of times in which I wished the two would hurry up and piece together their evidence and come to the right conclusion. It’s a good blend of action, mystery, and romance. B-

→ Jane
Previous article: The Case of The Oatmeal v. FunnyJunk and Charles Carreon
Next Post: Cultivating Tolerance: A multicultural solution