Angela James mentioned on Twitter she was reading something really good from Harlequin and I reminded her she had my Kindle address. A few moments later, a book by you appeared on my device. The magic of technology! Angie was right. Never Stay Past Midnight was a sexy contemporary with good meat on its bones. 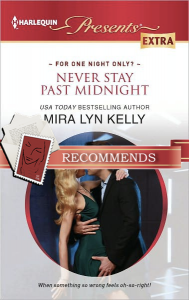 Levi Davis is in the midst of opening his newest club, this time in Chicago, Illinois. Levi lives a fantastic life. As a club promoter and developer, he spends his time scouting new locations, setting up new clubs, and moving on to the next business venture. It is not a lifestyle conducive to permanent relationships. Part of his deal with investors is a six month proven track record of profits. He’s at the tail end of his six month commitment and can not wait to get out of town and move on to his next project.

One night he is prowling a bookstore and runs into Elise Porter and they have a one night hookup. To Levi’s surprise, it is Elise that leaves, giving Levi the brush off.

“So, thank you,” Elise said, abruptly levering to sit and then looking around as if taking in a scene she didn’t quite know what to do with.

“Umm, that was really nice…” She winced a little, hesitated and then reached over to…pat his hand? “And I should get going.”

Nice? What the—? Okay. So she was nervous again.

Because she hadn’t done this before. Made sense.

While Elise wouldn’t ordinarily indulge in a one night stand with a gorgeous stranger,  she can’t resist giving herself a sort of treat. Elise is in the process of getting a yoga/Pilates studio opened. She had just submitted her loan for her business and was spending most of her time studying business books, and working 10 jobs at the same time.

Elise ends up babysitter her sister’s dog, a giant brute of a dog, and she needs someone to take care of him during the afternoon. Even though it violates their one night stand, Levi is the only person she knows who does not work during the day. Embarrassed but desperate, Elise calls Levi, stumbles through an introduction because she isn’t sure he will remember her. Levi thinks that it is Elise’s lame excuse to hook up with him again but he’s thrilled she is opening the door to something he had thought was firmly closed. Only Elise’s plea for help was genuine, much to Levi’s surprise.

“YOU’RE serious?” Levi stared down at the leash, empty newspaper bag and crumpled twenty she’d stuffed in his hand and let out a laugh that was equal parts irritation and incredulous amusement. He should have seen it the second she’d swung open the apartment door, greeting him with that wide, grateful smile. No makeup, her hair stuffed in another one of those elastic things. Ratty jeans and a not too tight T-shirt. “This is actually about the dog?”

Elise blanched, her chin pulling back. “You thought it wasn’t about the dog?”

What a chump. This was not how it went with him.

He liked to be in control. Hell, he was man enough to know he needed it. And, this thing with Elise. He was most definitely not in control.

But, based on the Olympic-level hand-wringing happening in front of him, neither was she.

Rubbing the back of his neck, he shook his head. “Not to sound like an ass here, but it usually isn’t. The dog, the lost earring, the house keys—” misplaced thong “—whatever it is, it’s usually an excuse.”

Ah, hell, he knew where this was going…held up a staying hand, thinking his ego really wasn’t up for the speech he’d given too many times to count.

The problem for both Elise and Levi is that they can’t seem to keep their minds off sex and their hands off each other. Levi knows that Elise is the type of woman who likes boyfriends and walks in the park on the weekends. Elise knows that Levi is the type of man that moves from one woman to the next, the rolling stone that gathers no moss. They promise each other that their relationship, such as it is, will be sex only.

Despite their best intentions, Elise and Levi fall for each other and the conflict becomes how a relationship can fit into both their disparate lives and ambitions. Elise is different than the women Levi has been with in the past. He can’t stop thinking about her and he knows enough about himself to realize that his feelings are beyond just physical.  Beyond the steaminess of this story (and the club scene is super hot), I loved how we were shown the mental progression of lust to love for both of these characters, particularly Levi.  We got to know the characters well, what drove Elise and what drove Levi.  Knowing the characters helped understand why these two in particular fit.  In many books, characters seem so interchangeable but in this one, I really grasped them. I could have lived without the fecund CareBear epilogue though.  Did that fit them? Not so much.  B+