REVIEW: Neil Armstrong – A Life of Flight by Jay Barbree 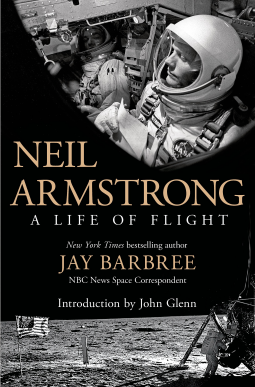 To date, everything written about Armstong’s life and flights has been written from the outside looking in; Barbree is the only person whom Neil Armstrong trusted to share close personal details about his inspiring life story.

Working from his years of notes, and with the full cooperation of the Armstrong family, Barbree has written the definitive biography of America’s most famous astronaut and one of our greatest modern heroes. Much has already been written about Armstrong and the major players who helped him fly to the moon, but he wanted this book to emphasize his two passions—family and flight. Barbree and Armstrong discussed everything, from his two marriages and the death of his baby daughter, to his love of flying, the war years and of course, his time in space. The book, timed to coincide with the 45th anniversary of the Apollo 11 launch and full of never-before-seen photos, includes many personal details that have never before been written, such as what Armstrong really felt when he took that first step on the moon, what life in NASA was like, his relationships with the other astronauts, and what he felt the future of space exploration should be.

I wasn’t even born when President Kennedy announced his grand dream for NASA to land men on the moon and return them safely home by the end of the 1960s. Though I do remember hearing about NASA, moon walks and astronauts as a child it wasn’t until I was an adult that I truly became fascinated with and interested in the NASA program and space flight. This might have something to do with my early introduction to it. That came when I was very young, on vacation with my family one July and my mother dragged me out of bed, plopped me in front of the TV and I sat watching the first step taken by man on the moon. I’m ashamed to say at the time it didn’t make much impression on me but since I was only a tot at the time hopefully that will excuse it.

“Liftoff, we have liftoff, 32 minutes past the hour, liftoff of Apollo 11. Tower cleared.

In the years since, I’ve read books and watched programs and movies about the astronauts, the flights, and the aftermath. One thing that struck me is how, decades ago, Neil Armstrong decided to stop giving interviews. He’d said all he had to say, answered all the questions he could about the landing and wanted to move on. So when I saw this book listed at Netgalley my initial thoughts were wow, a view from the inside of this man’s life and with his cooperation. I need to check this out.

“The Eagle has wings,”

“Eagle, Houston, if you read, you’re Go for powered descent.”

Barbree clearly loves the story he’s telling, knows it extensively yet manages to tell it in a way that’s easily undertandable without implying that the reader is uneducated or stupid for not knowing something. What needs explaining is done simply and efficiently and what doesn’t is left alone. The book is written in a more subdued style but not to the point of dry or technical. Instead it’s very matter-of-fact and not given to too much gushy, gee whizz, wow, emo reporting. Still it’s moving and I will admit to getting emotional myself while reading it. The book is packed with wonderful photos including several views and angles of the Apollo 11 liftoff and their holding orbit before leaving Earth for the Moon.

“Houston, Tranquility Base here. The Eagle has landed.”

Though the book obviously focuses on Armstrong, I’m glad that time is also spent extolling the Soviet achievements and the cosmonauts who almost made it there first. As well, the Mercury 7, Gemini 8 and Apollo astronauts are all mentioned and their places in the NASA space program explained, noted and lauded. Not only were these steely eyed missile men who could and did coolly handle the expected risks and the unexpected glitches that could have lead to disasters but they were brilliant as well, racking up advanced degrees in subjects that make my head hurt. It was a massive group effort and Barbree shows this.

“That’s one small step for man,” Neil said with a momentary pause, “One giant leap for mankind.”

But what about life after July 20,1969? Armstrong’s influence carried on far past his moon landing. He was instrumental in inspiring future astronauts to want to fly in space and enter the program. When the Challenger tragedy occured, he was one of the ones called on to head the nuts and bolts part of the investigation. When the US and Russia began Soyuz and then joint work on the Intenational Space Station, it was his work in tricky docking maneuvers during the Gemini and Apollo programs that lead the way. From everything I’d ever heard or read about Armstrong, he was a class act. He was a man who achieved greatness, who truly did boldly go where no man had gone before but who remained solidly grounded – so to speak – and who never stopped pushing for more space exploration. B

‘Here Man from the planet Earth first set foot upon the Moon, July 1969 A.D. We came in peace for all mankind.’