I’m a huge fan of yours. The original Kushiel trilogy about Phedre and Joscelin rank high among my favorite books. Even when one of your novels fails to capture my heart, I still find myself appreciating what you attempted with your writing. I’ve said in the past that I wish you’d move on from the Kushiel world and create a completely new traditional fantasy series, but I’m still fond of this setting and eagerly pick up books in the continuity. My love of Phedre carried me through three novels of Imriel’s emo posturing, after all. 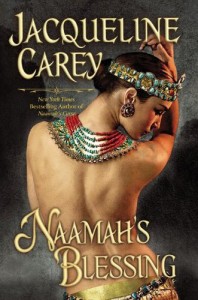 Naamah’s Blessing concludes this latest trilogy set in the world of the original Kushiel’s Legacy trilogy. The books have followed the adventures and travels of Moirin, the daughter of an Alban bear-witch and D’Angeline priest of Naamah. Moirin’s dual heritage has given her a unique outlook on life. She readily recognizes the somewhat xenophobic superiority complex of the D’Angeline people as a whole due to her upbringing in the Alban wilderness while also finding herself the recipient of the attentions and suspicions granted them.

If the first book covered Moirin’s coming of age and learning about her heritage, and the second book chronicled her chasing and winning back her true love, Bao, this third book brings everything full circle. Moirin has returned to Terre d’Ange after her adventures to find a pall over the country. The crown prince has yet to return from an exploratory voyage to Terra Nova and the relationship between the king and his young daughter, Desiree, is strained at best. Even more troubling, the king has withdrawn from the daily running of state affairs, leaving it all in the hands of a man who may not be completely trustworthy. The glory days of the royal house we saw in the Kushiel books, that’s for sure!

Moirin’s presence, however, injects some much needed life into politics. Due to her heritage as a bear-witch (who were antagonists in one of the Imriel books) and her contentious departure from Terre d’Ange some years before, she has a certain reputation in court. However, she loved the king’s late wife with all her heart and it is for that reason the king makes her the oath-sworn protector of Desiree despite any protests against the appointment. And while the child does flourish under Moirin’s care, it is not to last because tragedy strikes the royal house once more and she must once again find herself on the move, this time to find the lost crown prince and bring him home before the country falls into the hands of an overambitious opportunist.

Like the previous books in this trilogy, Naamah’s Blessing has a fantasy travelogue structure. This has always been an element in all of the books from this continuity, but I feel like the element is more obvious in Moirin’s books due to the glaring lack of political intrigue. It didn’t bother me so much in the previous two Naamah books, considering Moirin’s background, but it did bother me here.

In the first sections of the book when Moirin is back in Terre d’Ange, I felt like we’d returned to the intensity of the Kushiel world. While I understand that Moirin can never be a mover and shaker in the same ways that Phedre and Imriel were, I really enjoyed that taste of intrigue where she was trying to act in Desiree’s best interests, turn public opinion in her favor, and outmaneuver the king’s stand-in, who also happened to be her beloved father’s best friend. As I told a friend in an email, it felt like for the first time in the Naamah’s books, there was a legitimate threat, that there was actual doubt as to whether or not Moirin would succeed in her goals.

But then the tragedy happens and Moirin must travel again. I’ve always been of two minds about this aspect of the Naamah books. On one hand, I like seeing different locations in traditional fantasy and I do see that the supporting and minor characters from these other locales have their own stories and tales outside of Moirin’s goals, so it’s not a case of characters of color existing for the sole purpose of helping the white main character. On the other hand, the analogues of China, India, and the New World (Aztec, Maya, and Inca) really do serve nothing more than as exotic backdrops for (analogue) European people’s adventures at times. This is mitigated at certain points in the narrative, particular when D’Angeline self-centeredness rears its ugly head:

It really does feel like a whole new world,” Denis said in a contemplative tone, gazing across the sea of waving grass. “And to imagine that for thousands of years, no one knew it was here.”

“Except for the millions of people who lived here,” Bao pointed out.

“Mayhap,” I said. “Or mayhap it is that like many D’Angelines, you think so very highly of yourself, you have a hard time reckoning others your equals.”

But I would be lying if I said I was happy about the usage and execution of that element in these books.

It comes as no surprise that the plot thread left hanging from the first book, Naamah’s Kiss, is picked up here. There wasn’t much subtlety in how Raphael’s story played out there so it came as no surprise to see his character return in this one. Sadly, I found Raphael to be two-dimensional. One of the things I’ve always liked about your antagonists is that they’ve been nuanced and had multiple sides. Even when they did terrible things, they were intriguing and fascinating and we as readers could see why they chose to do the things they did. While I realize not every antagonist cannot be like Melisande and that not every protagonist can have such a complicated relationship with their antagonist like Phedre, I did ultimately think that Moirin and Raphael were a pale echo of, what I thought to be, the intense Melisande and Phedre. It also didn’t help that Raphael was literally portrayed as a crazy coke addict.

I can’t decide if it’s the sharp contrast between the initial setting in court and the accompanying political intrigue and the traveling through the jungles and its inherent adventure fantasy trappings, but I thought that the book lost some momentum towards the end of the book. I love political intrigue and I love adventure fantasy but something about the combination in this book failed to work for me. It might have been because the sections were so clearly delineated and less unified.

I know I sound like I didn’t like this book at all but that’s not true. A Jacqueline Carey novel is always an enjoyable novel for me. And even though it read like a travelogue, I still liked the setting because using the Aztec, Mayan and Incan civilizations as a basis for a traditional fantasy setting is still pretty rare in the genre. I realize these books are essentially “an Earth that never was” but I found it refreshing nevertheless. It’s a nice change of pace from the unrelenting pseudo-European settings of traditional fantasy. (And I say that as a Song of Ice and Fire fan!)

I will always like the sex-positivity of these books. The idea of all expressions of love being worthy and valid is one that resonates strongly with me. The themes of love and acceptance are as strong as ever in these books. Lately, I’ve been on a mad hunt for traditional fantasy novels about families — the ones we’re born into and the ones we make. So the combination of Moirin’s past relationship with Jehanne affecting her relationship with Desiree, and how Moirin and Bao fell in love with the girl herself. Part of the reason why I preferred the scenes in court was that they showed human relationships in all their complexity. The king loved Jehanne despite all her foibles and so loving Desiree pains him because she’s a miniature version of her mother. Moirin’s father is best friends with a power-hungry opportunist who does not like Moirin because he views her as a threat to everything he’s striving towards.

Like previous books in this series, I found Naamah’s Blessing to be a comfortable and comforting read. Your writing has always been able to knock me out of a reading funk, which I’ve been experiencing lately. The writing always has had that quality for me. I don’t know what it is. While I don’t think this book quite lives up to the greatness of the original Phedre books for me, I definitely think this concluding volume was far better than its predecessor, Naamah’s Curse. In particular, I thought the final chapters were beautiful in their portrayal of showing that an ordinary life with ordinary pain is just as good, if not better, than a life filled with grand destiny and great adventure. B