REVIEW: My Liege of Dark Haven by Cherise Sinclair

I’m pretty sure I’ve not read anything by you before. I saw Angela James talking about your book on Twitter and clicked over to Amazon to see whether the book might appeal to me. 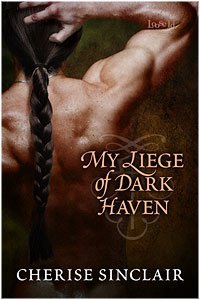 His late wife had been the center of his life, and Xavier Leduc wants no other. But when his new receptionist does her utmost to keep an emotional distance from him, he’s intrigued and digs deeper. She’s adorable. Intriguingly intelligent, beautifully submissive, sweetly vulnerable. He soon realizes her defenses are keeping her on the fringe of her sexuality–and her life. As he draws her into fuller participation, she unconsciously does the same for him. She begins to fill his world.

Ever since the night she met my Liege Xavier, Abby has questioned everything she believes about herself. She’s falling for the stern owner of Dark Haven and thinks he’s beginning to care for her…until the day he learns why she’s in his club.  – Goodreads Description

The blurb itself was enough to peak my interest, but it was the cover, showing a man’s back and long braid that really intrigued me. For some reason, I’m a sucker for a man with a long braid.

As the blurb says, Abby is facing losing her job at the university if she doesn’t live up to the maxim, “Publish or perish”. She needs something provocative to write about.  After being unceremoniously dumped by her boyfriend, Nathan, who really wanted her to explore the D/s lifestyle with her, Abby decides to face her fear and goes to Dark Haven, a local BDSM club. There she hopes to covertly observe and then write a paper about the social interactions and hierarchy within the club. When she arrives, she discovers that the club has just lost its receptionist. Given that she definitely cannot afford the dues to the club, she decides to take the job. One of the perks of the club is being allowed to play. Abby has absolutely no intention of playing; she’s there to study the behavior of the members. That is, until she meets the club’s intriguing owner, Xavier Leduc.

Xavier has been mourning his wife, Catherine, since she died five years ago. In the time since her sudden and unexpected death, he’s become known as a player. He generally has a few women he dates, a slave who lives at home with him and a play partner at the club. But he’s committed to no one, knowing that he’d never be able to duplicate his relationship with Catherine. But when he meets Abby, he notes immediately that she’s both a born submissive and has absolutely no idea what that means. He decides that he’ll begin her training by having her assist him in a demonstration with a younger Dom who needs some guidance. After the exercise, Xavier collars Abby indicating to club members that they’ll need to seek his permission before playing with her. He also tells her in no uncertain terms that she will not be permitted to just observe what goes on in the club, rather she must participate.

Abby is wholly disconcerted to find that Xavier is insistent that she join in the activities of the club. But in order to complete her research, she decides to give it a try. As she and Xavier begin to play, she finds that he demands her full attention, asks invasive questions, and is constantly putting her body, which she’s terribly self-conscious about, on display. And then there is the connection that she is beginning to feel with him. She’s very clear that Xavier doesn’t “do” relationships, but the insight he shows into her personality and foibles and his insistence that she never put him off with a lie or evasion is building her trust and her feelings for him. After they have sex for the first time, Xavier unceremoniously leaves Abby, realizing that he didn’t think of his wife once – something that’s never happened before. But Xavier can’t seem to stay away from Abby. She’s a gentle soul, one who he feels both responsible for and connected to. He continues to see her, and his feelings continue to build. As Abby tries desperately not to fall for Xavier, he’s busy falling deeply for her.

I really enjoyed this book. I formed an emotional bond with Abby almost immediately, even if I did question her motivation for joining the club. I felt like her reaction to the intimacy that Xavier was forcing on her, her body issues and her bewilderment that someone like Xavier would be interested in her was something I could really relate to. Her consternation at being told she needed to wear less at the club was exactly how I’d feel, and I appreciated her thought process behind taking off her top or bottom — it felt very real to me. I also like Xavier. He was domineering at times, but tempered that with a lovely need to take care of Abby, making him a Caregiving Alpha, my very favorite hero-type. He showed emotional awareness and thoughtful care, and I fully understood his reluctance to becoming entangled with Abby, and more, how she fell head over heels in love with him.

If I had any complaint about the book it would be that Abby’s stepsister, Janae, who played a small but crucial role in the climax of the story, was straight out of central casting. I would have liked to have understood more about her, why she behaved the way she did. Instead, she was just written EEEVIL, which was a bit much for me. Otherwise, this is a well written, deeply enjoyable romance featuring truly likeable characters and some very spicy sex scenes that build the connection and intensity of emotion between the characters. I give My Liege of Dark Haven a solid B.