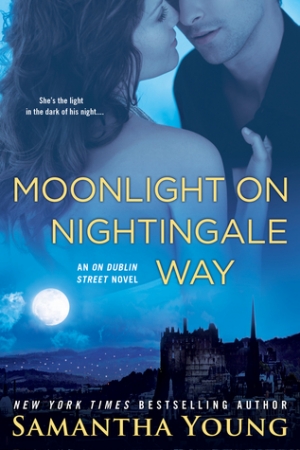 Your On Dublin Street series has been one of my favorite NA series. So much so that several of them have ended up on my Top 10 lists over the last few years. So of course I wanted to read and review Moonlight on Nightingale Way.

Logan is an ex-con. He’s done his time for beating the living daylights out of his younger sister’s boyfriend, who had beaten her to a pulp. Now he’s a free man, and due to his sister, Shannon’s fiance, he’s found a job working at a popular nightclub. His job exposes him to the full breadth and variety of eligible woman Dublin has to offer. Of course, Logan takes full advantage of the variety, sampling as many charms as he can.

Grace is a freelance editor who works from home, and often finds herself losing sleep due to Logan’s extracurricular activities. The walls are thin, and there’s really only so much “Oh Logan! You’re a god, Logan” a girl can put up with. But it’s when she steps out of her apartment to find one of Logan’s ladyfriends has left her thong to dry on the banister that Grace finally loses her cool. Logan thinks her reaction is over the top and hysterical, and when Grace accuses him of keeping her up all night with loud sex, he responds that she must have a glass up to the wall listening. Thus an antagonistic, non-neighborly relationship is born. All of that goes by the wayside when a young girl shows up at Logan’s doorstep claiming to be his daughter. Given that Grace is present when Maia arrives, and her gentle, soft spoken nature seems to bring the girl comfort,  Logan dragoons Grace into going with him to take Maia back to her mother. Her mother turns out to be a girl he was involved with in his teens, and she confirms what he already knows, Maia is his, and more, her mother, a junkie, is unsuitable. Logan immediately agrees to take Maia home with him.

He and Grace are thrown together often as Maia adjusts to living with Logan. It’s clear the 15 year old wants her dad and Grace to be together. While Grace finds Logan attractive, she’s clearly not his type, and he makes it clear that he’s not interested in messing up their slowly evolving friendship with an emotional attachment. Which would be fine, except that he’s clearly not happy when Grace has  dates, and finally one night, that jealousy boils over. Soon Grace and Logan are embarking on a relationship, though Logan has doubts that make him occasionally act like an ass. When Grace tells Logan that she can’t see him anymore due to one of these episodes,  he realizes he’s in love with Grace.

This was a sweet romance. I liked the juxtaposition of Logan, living life to its fullest after time in prison, and Grace, who is very proper and ladylike. I liked that Logan was a bit of a grouch and could, at times be bullheaded and jump to conclusions. But once he and Grace get together, he launches a full charm offensive. He’s sweet, thoughtful, and a tiger in the sack. He leaves no doubt that Grace is the one for him, even as she thinks that people wonder what he’s doing with “someone like her”. Grace has her own history, which is an interesting one, and even more, she’s survived that past by building a new family and support system. She owns her happiness and understands that she’s responsible for it. It makes her a character that is easy to root for. The couple has tremendous chemistry and their love story is a charming one. I also liked that Maia, an integral part of the story, didn’t feel like a plot moppet, but like a fully realized character.

I do feel that the book ends in a bit of a holiday bow. Every couple is touched upon in the epilogue while the ending for Logan and Grace just sort of peters out, which wasn’t as satisfying as I’d have liked. Nonetheless, I’m sad to be leaving my time On Dublin Street behind. It is, for the most part, a wonderful series, one that I recommend often. I’m truly looking forward to what you come up with next. Final grade for Moonlight on Nightingale Way a B.