REVIEW: Misty and the Single Dad by Marion Lennox

My first experience with one of your books was so successful, I’ve been bagging your backlist at eHarlequin. But for my next choice, I decided to go with this upcoming release. I mentioned in another review that I’m a softie for animals so when I saw that this book featured a heroine who feels the same way, it was a no brainer. 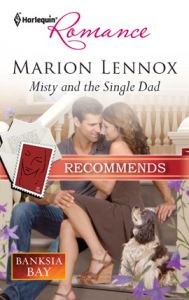 Teacher Misty Lawrence has always had big dreams of leaving her small hometown of Banskia Bay to see the world and have some adventures. But life has always got in the way, not that she minded first helping her grandmother take care of her grandfather before his death then her grandmother after her strokes. But Gran isn’t doing well and sadly Misty knows it’s only a matter of time.

But when Nicholas Holt and his son Bailey arrive in town and at Misty’s schoolroom, they allow a wounded dog to enter with them. Misty hasn’t the heart to let the dog be put down and despite the fact that it could tie her to the town, she takes in Ketchup. The local matchmakers have their sites on pairing one of their favorite hometown girls with the handsome widower and things work out so that Nick and Bailey become tenants in Misty’s large farmhouse. Sparks fly between Misty and Nick but Nick is looking for safety for Bailey and not a woman whose dream is to get out and see the world. Will Misty put her dreams aside again and be a safe haven or will she risk love for everything she’s always wanted?

I’ve gotten several of my pets from our local shelter and know how an animal with a sad story can capture your heart. Misty’s reaction to a dog in need is right up my alley. I think my reaction to Nick, whom Misty initially describes as Adonis, would be the same too. But I like the way that she refocuses past Nick and his hot bod and to a nervous child in need of her skills as a teacher. Then she has to change gears again to make sure Ketchup is taken care of without alarming a roomful of children. Misty seems like she’d be a good teacher, able to calm and direct six year olds though later her passions get slightly in the way as she makes some comments in front of Bailey that are designed to maneuver Nick. But then she also knows when to stay silent to get Nick to open up to her about the trauma in Bailey’s past.

Nick starts as very overprotective of his young son who has endured a year of hospitalization following the said traumatic event. In Misty, he finds a lovely young woman whom both he and Bailey can love and accept. I like that after the loss of his wife, he doesn’t go all “I’ll never love and risk that pain again” on us. But it still takes him a while to see the real Misty even as he begins to fall in love with the Misty he wants her to be. First he has to see beneath the wholesome girl next door exterior and the general who can give him his “marching to the vet with an injured dog” orders. Then he has to decide if he can relax and let some risk back into his and Bailey’s lives.

I like that though the initial time for Nick and Misty to begin to fall in love is short, they do sort through both the positive and the negative of the relationship. Then time is allowed for them to think things through and be sure about their feelings before the final commitment.

When push came to shove, I wondered what Misty would do. Would she shelve her hopes and dreams or stand firm? It looked for a minute like I was going to be disappointed. “No,” I thought, “she can’t settle. She can’t keep on being nothing but safe and responsible. She’s done that for too long. And how can Nick ask it of her? Can’t he see what she’s been through in her life and how much this means to her?” When she stuck to her guns, I cheered her on. But I was also cheering each little step that Nick and Bailey made back to normal. And the ultimate solution Nick finds is fantastic – though requiring a large bank account in order to grease things along.

The book starts off strongly with a great heroine who won’t allow her hero to shirk his responsibilities to Ketchup while he’s trying to make life safe for his son. But for a little while after that, it appeared that Misty would settle and give into what Nick wanted from life. However, there’s a rousing finish as Misty stands up and takes control thus becoming the woman she’s always wanted and having the adventures she always dreamed up. And getting an Adonis, cute son and two great dogs to boot. B