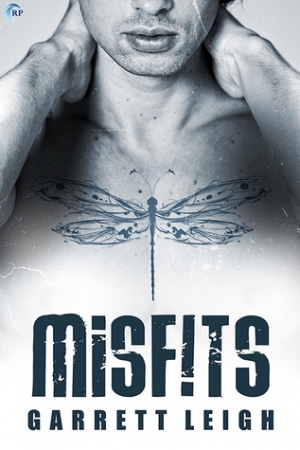 Some of my friends rated this book highly so I bought it.  I do like to read ménage romances and I’m always fascinated with the concept of a three way relationship (not just the sex, but that too I suppose) and how the parties balance things out and make it work. Here, there was an existing long term relationship and then a newcomer is thrown into the mix.  I was curious how that would affect the prior relationship and, in particular, whether it would weaken it and/or whether Jake would feel like second best.

While Misfits didn’t work quite as well for me as for some of my friends, I still liked it very much.  I do think that part of my reaction to the book was that my reading was a bit disjointed.  This wasn’t the fault of the story at all – my husband had a somewhat unusual urge to watch tv at night and I get terribly distracted when I try to read and the television is on – even when I’m completely disinterested in the show.

The story is told from deep third person POV, first from Tom, then from Jake, then Tom again and then Cass, with each POV being a separate (lengthy) section clearly delineated in the book.  Tom and Cass have been partners and soul mates since they met nine years before the book begins.  Together, they own Urban Soul, a company of eclectic restaurants and other food businesses across London and its environs.  Their ethos is environmentally responsible, organic and hip – with each business having it’s own vibe and menu.  No chain restaurants for Tom and Cass.

Cass works at Pippa’s, their first restaurant together, as the executive chef and Tom does most of the business related activity for the company.  They both work incredibly hard and, given one works mostly during the day and the other mostly at night, they don’t have a lot of time to spend with one another.  Tom (because the book begins with Tom’s POV) misses Cass desperately and wants to try and find a way for them to spend more time together.  Cass had a rough childhood and got into a lot of trouble when he was a teenager, including going to prison for stealing cars.  He straightened himself out after the experience but he feels he has been way more blessed than he deserves and, Tom thinks, Cass works so hard so he can “earn it”.

Tom and Cass have always had an open relationship.  They have never required monogamy as part of their connection and have always been open about their extracurricular hookups.  There is no doubt, at any time throughout the story, that Tom and Cass belong with each other and love each other deeply.

When Tom is scouting for a new location for an Urban Soul restaurant in Camden Town, he goes into a dive pub for dinner and meets Jake, a waiter.  Jake is in his early 20s, so a few years younger than Tom and has trouble keeping a job.  Jake has Tourette’s Syndrome (mostly referred to as TS throughout the book).   He twitches and buzzes and pops and mutters.  He has physical tics and verbal ones – when he’s happy he might burst out with “Fly him to the moon” for example and often he says “Wankers”.  When he’s tired or nervous, his tics are more apparent and, as can be imagined, in a busy restaurant, this doesn’t always go down well with the customers or his manager.  He is used to having people stare at him and treat him poorly – he doesn’t like it but he’s forced to deal with it in order to work and keep a roof over his head. His family haven’t exactly disowned him but they don’t seem to know what to do with him and his relationship with them is basically non-existent now.

Tom is not at all put off by Jake’s TS.  He asks questions about it early on and mostly then ignores it.  It is clear that Tom sees Jake as far more than a bunch of tics and verbal outbursts.  He thinks Jake is gorgeous and charming and vibrant and he’s terrifically attracted to Jake.  Because reasons, they end up spending the evening in a (different) pub together and much later, having sex in Tom’s and Cass’s Hampstead flat (Cass is not there).  They have a deep connection, more than physical, and Jake is smitten.

When Cass comes home the next morning, Jake, who doesn’t know of Tom’s existing relationship (Tom was planning to have brunch with Jake and tell him then) baulks at Cass’s arrival and bolts.  It takes a while for Tom to locate Jake again and a little longer again for Jake to be convinced that Tom is not a cheating git.    By this time, Jake has lost his waiting job and Tom offers him work with Urban Soul.  It turns out that Jake has wonderful website-building abilities and he greatly assists Tom with the Camden project.   After a while, Jake consents to meet Cass again and though things are initially awkward (from Jake’s side) they do eventually build a friendship via regular text messages.  After an even longer time, that friendship enables Jake and Cass to act on their physical attraction and they become intimate too.

Cass asks even more questions than Tom about Jake’s TS but he finds from Cass, he doesn’t mind it.  It is a relief for him to be able to share openly about some of the issues he faces.  Neither Tom nor Cass ever shame or diminish Jake’s because of his TS. They do notice what will tend to set Jake off (stress, tiredness) and what helps (physical touch and certain activities which involve a level of concentration – for example, Cass teaches Jake some cooking techniques and Jake is mostly tic-free in these “lessons”).  They try, without being patronising to assist him – they don’t always succeed and when they step too far Jake is well able to advocate for himself and the other men recognise and accept his boundaries.

There is an Author’s Note at the back of the book where she refers to Rico, a man with TS, who helped with her research.  She notes that Jake’s experience of TS may not be the same as another person’s experience of it but she has tried to build a complete character, with help from Rico’s own life experience.  While I am no expert on TS at all, it seemed to me that she succeeded.  The TS was part of Jake but by no means what defined him as a person and ultimately, it was neither here nor there to Cass and Tom, who loved Jake for himself.

I wondered if Jake would always feel like the third wheel in the relationship.  He was the newcomer and didn’t have nine years of history and in-jokes.  But actually, it turned out, that didn’t happen.  Tom loves Jake for himself and he also loves Cass.  Cass loves Jake for himself and also loves Tom.  Jake loves both Tom and Cass. My impression was that if one partner died (which doesn’t happen in the book, don’t worry!) the other two would stay together out of love for one another.  They were better together as a triad but each duo had a complete relationship, if that makes sense.

Jake is able to communicate with Cass in a way that Cass does not/cannot with Tom.  It is not so much a flaw in Tom’s and Cass’s relationship, more that Jake has a different connection.  And so on with the other relationships in the trio.

The book is set in London and its surrounds and is replete with British idiom, most of which was new to me.  I learned that “pants” equals “rubbish” as in “sorry your dinner was pants”, and I learned a new verb “sloped” – which means to “move in an idle or aimless manner”.  Perhaps the various characters sloped a little more repetitively than I’d have liked and I admit I took to Twitter to learn whether these were actual words or unfortunate (and mystifying) typos (and I thought Australian slang was weird!), but for the most part, these descriptions and phrases helped to embed the sense of place in the story.

I’m not a big re-reader but this is a book I wonder if I might get more out of if I re-read it (when the television isn’t on *shakes fist at hubs*) at some point in the future.  It’s not a high angst book – Cass does have a traumatic event occur to do with his mother but the melodrama is not ramped up to 11 and I didn’t feel the characters were unnecessarily tortured. Mostly it was a story about how three men fitted their lives together and much of it was quite beautiful.

“No,” Cass said. “We fuck other people because it suits us to do it, but if you’re freaking out about that, you should know neither of us has looked at another bloke since you came along. You’ve put a spell on Tom, and I’m not far behind.”

Yep. That was Cass, all right, and his words did strange things to Jake. He’d closed his mind to the possibility of Tom hooking up with other men, couldn’t see where he’d find the time, but knowing Cass hadn’t either gave Jake pause. Until he’d felt Cass’s lips on his in the club the night before, he hadn’t known he cared.

Cass nudged him. “Don’t do your nut, but I reckon you’re everything me and Tom didn’t know we were looking for.”

I do have a lingering sense that there were bits missing I’d have liked to have seen but I can’t tell how much of that is related to the disjointedness of my reading or really articulate what those things were.  In any event, I’m going with a B for the grade and I do recommend Misfits to those who are interested in reading an m/m/m romance which focuses on the relationship.