REVIEW: Midsummer Dreams by Alison May 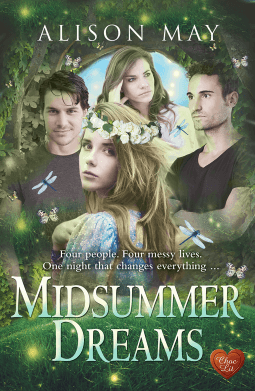 Four people. Four messy lives. One night that changes everything …

Emily is obsessed with ending her father’s new relationship – but is blind to the fact that her own is far from perfect.

Dominic has spent so long making other people happy that he’s hardly noticed he’s not happy himself.

Helen has loved the same man, unrequitedly, for ten years. Now she may have to face up to the fact that he will never be hers.

Alex has always played the field. But when he finally meets a girl he wants to commit to, she is just out of his reach.

At a midsummer wedding party, the bonds that tie the four friends together begin to unravel and show them that, sometimes, the sensible choice is not always the right one.

I had so much fun reading your first 21st century Bard novel, (now called) “Sweet Nothing” that I jumped on this one as soon as I saw it listed. Kudos for another intelligent reinterpretation of one of Shakespeare’s plays in contemporary England.

Given the huge cast of the original play, some characters were pared down while others were combined and changed slightly. Frankly this didn’t bother me at all as the story is now lean, mean and focused on only three couples. The main action takes placed in the enclosed, sometimes strange world of academia leading up to a wedding with the theme of the midsummer night revels.

The story slowly settles in to MSNDream characters but is modernized enough so it’s natural instead of feeling forced as often happens when classics are updated to now.

The chapters are told from the PsOV of Emily (done in 1st person), Helen, Dominic and Alex (all in 3rd person). I’m still unsure why we get Emily’s first person but she is portrayed as the one lacking in the self esteem department who likes older men who can take care of her. Having her show this through her denial of her competency at driving is inspired as I’ve heard British driving instruction can be a nightmare of nerves and dejection.

Meanwhile Helen is a hourly lecturer trying to advance in her academic career while Dominic fights his feelings of class inferiority (this is England) in spite of his more senior position in the department. Alex really is a tart, isn’t he, as he takes the role of modern ladies man determined to do the least amount of academic work possible.

Emily’s father, Theo, and the woman with whom he’s found love at an advanced age, Tania Highpole, are the final couple and it’s their marriage, strongly opposed by Emily who is determined to break it up, which provides the stage for the lovers to mix and change allegiances.

I was skeptical about how on earth the magical aspects of the lovers changing their romantic focus would be pulled off. Having the wedding be a fancy dress affair was brilliant. Alcohol and some hired performers who do hypnosis as a party trick did the trick – pun intended.

The book started with the play’s plot but then embroidered on it at the end. It gets taken further in a way that makes sense in a modern setting. The end is HFN and in love. People are still growing and changing. With counseling Emily is working on her issues, Alex has found his true passion, Helen is moving up academically and Dominic has realized what will make him happy and has shifted his professional career. The book is funny but realistic. It’s obviously taken from the play but is not a slavish adaptation. The modern doesn’t get shoehorned into the actual play. I enjoyed reading it, catching the homages and discovering the updates. B