I’m a sucker for Christmas stories, and anthologies are a great way to try out new authors, so a Christmas anthology can be a double winner for me. While I’ve read one of the contributors to this volume before, but the other two were new to me. Beverly Jenkins, whom I’ve read previously and who has a deservedly large fan base, wrote my favorite of the three. Overall, I found the collection to be uneven but worth reading. 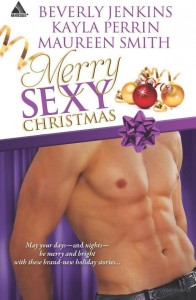 Overtime Love by Beverly Jenkins features Tasha Bloom, a wealthy investment banker who inherits her miserly grandfather’s badly managed semi-pro team even though Drew Davis, the general manager, had been promised that part of the estate. Tasha had a teenage crush on Drew, and now she has to find a way to work with him and his equally resentful team. Tasha focuses her attention on rebuilding the team, and the project brings her closer to Drew and makes her think seriously about switching careers, cities, and her single status.

Jenkins does a terrific job of making both Drew’s anger and his and Tasha’s mutual attraction feel genuine and non-hokey, and she’s equally good at making Detroit a character in the story rather than just a superficial backdrop. I don’t know much about how semipro football operates, but both the business side and the player characterizations felt authentic. Tasha’s best friend Monty is a bit of a caricature, but the other characters were richly portrayed, even in brief parts, and Jenkins expertly integrates a multiracial cast of supporting characters. I also really liked the fact that Tasha was in her late 30s and Drew was even older. Jenkins’ prose is straightforward, leisurely, and slightly formal in its style; some people love it while others find it a bit dull (I’m in the former category). This short story is a good way for readers to get a taste of her contemporary voice. Grade: B

Ex-Mas Reunion by Kayla Perrin was my least favorite of the three stories. It’s a story of reunited lovers: Kendra Parris and Damien Monroe had a summer romance right before their first year of college, but they broke up the following autumn when Damien inexplicably stopped talking to Kendra, and they haven’t seen each other since. They meet a decade later at JFK, when both are trying to get home to Louisville for Christmas. A snowstorm cancels their flight and Kendra reluctantly agrees to drive west with Damien until they get to a city with an open airport. While Kendra is still angry and hurt at Damien, she’s just as attracted to him as ever, and the latter feeling is mutual. Can they figure out what went wrong before and reconnect this time for good?

My biggest problem with this story was that Kendra was so upset at Damien, even after ten years of no communication whatsoever. She has her dream job as a Senator’s aide in DC (which is not so dreamy at the moment) and presumably a decent life, and in the opening pages she thinks of Damien for the first time in a while, but when she sees him she regresses to her younger self. There are multiple misunderstandings in the past and about the past (which is not surprising given they were teenagers), but it takes a major crisis for Kendra to place them in some perspective. I wanted to shake Kendra and tell her to grow up, and I felt as if their individual and joint realizations of their feelings were told to me rather than shown. On the plus side, however, Kayla Perrin can really write passionate love (and sex) scenes. I had no trouble believing that after ten years they still had the hots for each other. Grade: C

A Holiday Affair by Maureen Smith features Ava Cameron, an ambitious Atlanta lawyer on the verge of making partner in her prestigious firm, and Colby Austin, a partner at a rival firm. Ava and Colby meet and share a passionate one-night stand and then almost immediately discover that they are opposing counsel in a wrongful-termination suit. They both know they have to stay away from each other, but they can’t quite manage it. Their white-hot lust leads to a number of very sexy scenes, interspersed with sequences in which Ava, and to a lesser extent Colby, remind themselves that this is completely out of bounds for them, ethically speaking.

I had really conflicted feelings about this story. Smith makes it clear that Ava and Colby are misbehaving professionally, even though their relationship does not appear to adversely affect the outcome of the case. But Ava suffers far more for her transgression than Colby does for his, which annoyed me. And the not-really-believable resolution to Ava’s problems didn’t allay my concerns. In addition, there are any number of characters that seem to be part of other books (this story is apparently part of a series) and while I didn’t need to know who they were, my ignorance about them made them feel like clutter rather than necessary to the story. That said, Smith is a good writer, and she effectively conveys both the dilemmas the two face and the depths of their attraction. And did I mention the sex scenes are really hot? Oh, I did already? Well, they are. Grade: B-

There really isn’t much Christmas in this anthology, which is not necessarily a bad thing. All the stories have all or part set at Christmastime, but the holiday itself doesn’t feature prominently. Another interesting aspect of all three stories is that the women are from more comfortable and/or privileged backgrounds than the men.  And while these differences inform their characters and influence their interactions, they don’t create insta-conflict.

My enthusiasm level varied across the stories, but taken together this anthology provides a very good introduction to the authors and to the types of stories readers can find in the Kimani category line.