This turned out to be such a lovely book and in a way that totally surprised me. The story opens with Cooper Murphy proposing to Jorie Burke after knowing each other for six months, in a totally romantic and kind of scary way (come on, it was kind of creepy because the reader doesn’t really know Cooper and Jorie and you get the idea that they don’t know each other either). Frankly, I don’t know if the proposal was the best place to start even though there is some nice synchronicity in the end. 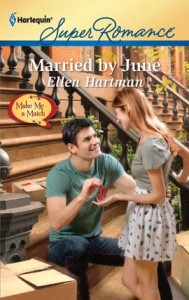 The story is about Cooper and Jorie actually falling in love which, unfortunately, happens after the marriage proposal and not before. Jorie’s mother dying wish was for Jorie to get married and she got The Wish Dream to agree to pay for the wedding. (I called “Make a Wish” in my head). As she was dying, she encouraged Cooper to ask Jorie to marry him, not wanting Jorie to be alone. Cooper, caught up in the idea of being the white knight on the charger, does so. As he attempts to write his vows six months later, he realizes that he can’t marry Jorie. As a speechwriter, his inability to articulate his commitment to Jorie on paper is meaningful and he breaks it to Jorie almost immediately.

Jorie’s life is falling apart. Her job as a wedding planner is struggling because since her mother’s death, she’s not been able to connect with her brides. Wedding planning used to be effortless and at one time she was called the “wedding whisperer” by one happy bride. Now her bridal themes include movies where every one dies at the end.

But Jorie isn’t the only one who is reeling. Cooper finds out that he has to write a resignation speech for his brother, the US Senator, who has gotten someone other than his wife pregnant. Worse, his father wants Cooper to serve out his brother’s term so that the seat can be set up for their cousin Theo. Cooper’s whole world has been laboring for his father, then his brother, writing campaign speeches and position statements.

Finding out his older brother was fallible, seeing his family turn on the older brother, is creating a rift in Cooper’s world. Nothing really makes sense anymore. And now, in order to hold the seat, Cooper has to go and convince Jorie that he isn’t quite ready to call off the wedding because “bride jilter” is not much better than “cheater.”  He doesn’t really want to do this to Jorie and he tries to remember what led him to the path of engagement in the first place.

He remembered it from their first blind date. They’d been set up by their mothers, who’d met at a spa in Arizona. Chelsea had been living there and Rachel had gone for a reunion with some college friends. He’d asked Jorie where she’d like to go and she suggested a trip to the Antietam Battle Museum with that same challenge in her eye. She told him later she’d hoped the museum would scare him off. Her mom had a habit of setting her up on blind dates and she’d developed a strategy of boring the guys to death so they wouldn’t call again. Instead, he’d told her he loved the Antietam Museum and she’d given him her first genuine smile, putting one hand on her hip and leaning toward him just enough that he noticed her breasts. He’d realized in that second that he was going on a date with a beautiful history geek who had a hot body and a killer smile and he’d started scheming right then to get closer to her.

Once the engagement was on, though, Jorie didn’t talk to Cooper about anything but the wedding and whatever connection they had slipped away.  Jorie and Cooper flip flop positions more than once through the story as we trace their path from meeting to engagement to break up to falling in love, for real this time, because they both learn a little more about themselves, what it means to love someone else and how to juxtapose that love with life’s obligations. Cooper wants his life back to normal and Jorrie is grieving for her mother.

The farther I got into the story, the more I appreciated it. One thing I like about straight up contemporaries is that it focuses on the characters and in good straight contemporaries, you really get to explore the concept of love being buffeted by reality. There is no soul mate connection telling Jorie and Cooper that they have to stay together, no metaphysical imperative driving them to be one, and no serial killer forcing their emotions to a fevered pitch. Instead, it’s two ordinary people trying to figure out their way in life.

There were a couple of other scenes in the book (particularly one that is designed to show Cooper’s manly side) that seemed out of sync with the rest of the story, as if I was supposed to be convinced that Cooper’s testosterone level was sufficient for him to be cast in the part of “leading male, romance hero”.  And I wished that Jorie, at times, would have been a bit more proactive.  Cooper really lead the romance dance, even when he was breaking up with Josie for her own good.  (or maybe particularly so).

However, I particularly loved how Cooper would write in his little speech book every one of the promises he wanted to make Jorie. It was truly like watching someone fall in love which is part of the magic of romances. I just hope other readers won’t be dissuaded by the opening scene. Perhaps I am the only one it bothered. B

PS for those who have trouble envisioning a hot speechwriter, let me help you.