Somehow I got the setting/era for your latest novel, “Marriage of Mercy” completely turned around in my head, thinking that it was going to be set on the American Western Frontier. Then when I went back to the eHarlequin website to recheck the back blurb, I realized that whoever wrote it didn’t actually read the book. There goes me being lazy and borrowing it… Reading it is like a nice sized plate of fresh, warm just baked chocolate chip cookies and a glass of milk. It’s comfort food that makes you feel good but not something that can be eaten – or read – all the time. Still the sweetness of the book is a nice break from doom, gloom and small, mean people. 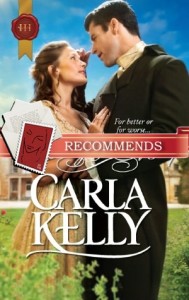 After the death of her financially unwise Baronet father, impoverished Grace Curtis assesses her situation, finds it almost hopeless and makes a decision that will change her life. With no relatives to fall back on and the estate lost to debt, she takes a deep breath and approaches the only people she believes might be willing to help her – Adam Wilson, the town baker and his wife. She’ll work for them, first paying off the family debt the kindly couple allowed to build, and then if her work is satisfactory she’ll stay on for wages. Ten years later Grace has accepted her total fall from Society and her, probably permanent, unmarried state but she’s also gained self satisfaction and discovered that she loves to invent new goodies to tempt the customers of the store.

One such customer ends up changing her life again. Before the will of the Marquis of Quarl is read, Mr. Selway the estate solicitor requests that Grace be there. She – and the quarrelsome new Marquis – are astounded to learn that the elderly man Grace had befriended has left her use of the dower house for her lifetime in addition to the yearly payment of £30. All she has to do is act as the paroler of the dead Marquis’s illegitimate son, fathered when Quarl was in the army and stationed in NYC during the late Rebellion of the Colonies. Captain Daniel Duncan and his crew were taken as prisoners of war when a British warship had the weather gauge and captured the USS Orontes. Since then, they’ve been held in the deplorable Dartmoor prison.

More as a favor to her deceased friend, Grace agrees. She and Mr. Selway arrive there and are horrified at the conditions they find. Grace is also shocked to discover Duncan is at death’s door. His last act is to quietly urge her to take another man in his place. Helpless to turn down his plea, the choice is made when the rest of the crew unselfishly push sailing master Rob Inman at her. Rob doesn’t have the willpower – and barely the physical strength – to resist and the two find themselves inmates of the dower house. For in order to fulfill the terms of the parole, “Duncan” must remain with Grace at all times. Should they be separated or he do a runner, at worst he can be shot on sight or at best returned to Dartmoor.

Rob’s American independence annoys Grace and his unwillingness to kowtow to the new Marquis pisses off the nobleman who sets a tough to watch the two day and night for any sidesteps from the terms of the parole. Can Grace rein in Rob who chafes at having to stay in a country at war with his? Can Rob settle down for the remainder of a war that is still very much in doubt now that Britain and France have ceased hostilities and the towering might of the British military can be focused on the upstart Americans? And what can these two people, separated by country and class, do about their growing feelings for each other?

I was talking with a friend recently and telling her I’d just finished your book. My friend asked if you’d written your usual hero and heroine and I replied that you had and that this is what I’ve accepted that I’ll get from you: the usual kind main characters and tons of good hearted people coming out of the woodwork. Even Sailor Billy, the Duke of Clarence, gets teary eyed. That seems to be a sign of goodness in your characters – people who cry easily. Usually your villain’s bark is worse than his bite but this time the villain actually took a chunk out even though he was thwarted, when all was said and done.

There are lots of historical facts worked into story but so nicely that I was hardly aware of the history lesson. Imagine a world with no donuts ::shudders::. But they’re not hard to make so I was left to wonder why would the Squire – who also fell in love with them when he was stationed in NYC during the late war – not have had his cook attempt some? The least said about the conditions at Dartmoor the better. I think, however, that the Marquis of Quarl should properly have been addressed as Lord Quarl instead of Lord Thomson – his family name. All the cloak and dagger stuff at end got sort of twisty arounded. I had an inkling but didn’t sniff out the whole of it. One thing confused me. Why wouldn’t Rob have recognized someone’s accent? Because Americans are so bad at recognizing a real English accent?

Grace – and why did so many people take to calling her Gracie so quickly after meeting her? – is kind hearted, practical, shoulder to the wheel type of person. As Rob says, she makes sure things get done and done correctly. She and Rob are truly two of a kind and meant for each other – both plan, work hard and have had experience being in desperate circumstances – which brings out the “git ‘er done” work ethic and survival mode in each. Sometimes your heroes and heroines are a touch saintly but while these two are minted gold for the most part, they do indulge in a snit and temper spat or two. Grace gets irritated that Rob is so independent while he chafes at her following the letter of the parole. But that’s who they are and they come to admire it in each other even as they’re falling quietly, and they think hopelessly, in love. Rob sees her impresario personality and it calls to him – and vice versa. Nantucket best watch out for their bread innovations. B