REVIEW: Loving Maddie from A to Z by Kelly Jamieson 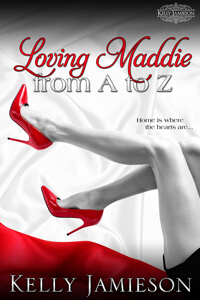 My reactions to your books are a bit of a mixed bag; some I’ve loved and others I… haven’t.  But I’m happy to report this book was a success for me.

Aiden, Maddie and Zack were friends in college.  After Maddie was attacked by an abusive boyfriend, dorm-mates and best mates, Aiden and Zack, “rescued” her and then stuck to her like glue when said abusive dickwad didn’t want to leave her alone.  Through this, they became close friends.  Each have an artistic side and they had common interests in sharing their creative passions.

Seven years before the book begins, Zack leaves to travel the world as a photojournalist. His departure is abrupt and both Aiden and Maddie are hurt and confused by it.  Sometime after that, Aiden and Maddie started a romantic relationship and when the book starts, they have been happily living together for some time.

Aiden and Maddie love each other deeply.  Their sex life is energetic and satisfying but at the same time, each feels something is missing and they are trying to spice things up in an effort to fill what is missing.  They have limited success.  Aiden isn’t confident with a flogger and Maddie doesn’t find much for her to enjoy in using a strap-on (even though Aiden’s very happy with the result).

The couple are devastated to hear that their absent friend has been captured by rebels in Syria and they do all they can to put pressure on the authorities to find him and bring him home safe.  After a number of weeks of captivity, Zack is able to escape. He is suffering from PTSD as a result of his ordeal and has lost a lot of weight.  Maddie and Aiden are able to persuade him to come home to their Chicago apartment and recuperate.

It turns out (big surprise!) that Zack had feelings for both Aiden and Maddie and felt those feelings were impossible; he basically ran away so he didn’t have to see them fall in love and live HEA. He thinks enough time has passed he can cope and besides, he not at his best anyway, emotionally and physically after his traumatic experience, so they’ve caught him at a weak moment. In fact, he was surprised to find that Maddie and Aiden had been so concerned about him and is touched by all their efforts on his behalf. Maddie has emailed regularly in the last seven years but his replies have been brief and sporadic to say the least. He thought his departure from their lives and his lack of meaningful contact had irrevocably damaged their connection and, basically, he had no-one in his life who cared all that much about him. It is, in part, this realisation which informs his later decisions.

Living in close proximity to Maddie and Aiden, and sharing computers (Zack basically lost all his possessions), Zack clues in that there is a hint of trouble in paradise.  Maddie tearfully confesses to Zack that she thinks she isn’t enough to satisfy Aiden and worries that in the long term, it may erode their relationship beyond repair.   Zack is not only bisexual, he’s also a Dom and in the past seven years, he’s gained plenty of experience in that arena.  He thought, especially given his sexual preferences, a relationship and a HEA for him was most unlikely.

There is some interesting discussion about dominance and submission in the book.  It turns out that both Aiden and Maddie are sexually submissive and it therefore makes sense that they have difficulty satisfying those aspects of each other.  Aiden is worried at first that his desires make him weak.  He goes through a process and realises that’s not the case at all, ably supported by his partners.  The release and high Aiden gets from submission is explained; he has a high powered, high pressure job and is in charge in so many areas.  Working out, running and sexual submission (albeit in slightly different ways) all allow his mind to quiet and the weight of his burdens to disappear for a time.   It has just occurred to me that there wasn’t really any explanation in the book about why Maddie wanted to submit. I’m only a junior grade feminist but I think this is probably unreasonably gendered.

For Zack, the dominance he exerts over Aiden and Maddie help to center him after a traumatic experience where he wasn’t at all in control.  Also, his experience of being forced to submit to the will of another (when he was captured – there was no sexual aspect to this, I hasten to add) has even more clearly highlighted to him the vast divide between that and consensual sexual submission.

This book is mostly the early days of their relationship and the story ends on a very hopeful happy for now note.  The triad are certainly intending to make a life together so it probably also qualifies as a HEA depending on the reader’s definitions.   There is some discussion about how they are going to negotiate their lives together – it made me laugh that Aiden has an agenda for a “family meeting”.

Each of the triad loves each other and each brings something to the relationship that the others need.  Their bond is also grounded in a strong friendship and a long history and shared interests, as well as a smoking sexual chemistry.  As can be expected, there is a lot of sex in the book.  Some of it is slightly dissatisfying (to the parties) and some of it is a little fun and all of it is very dirty and scorching hot.

I enjoyed Loving Maddie from A to Z quite a bit –  it was an easy and entertaining read and I read almost all of it in one sitting.

→ Kaetrin
Previous article: Monday News: Conan Doyle estate is at it again; HC debuts Harlequin Audio; profile of Judy Blume; and UK children’s literacy rates up
Next Post: Where Were You When…