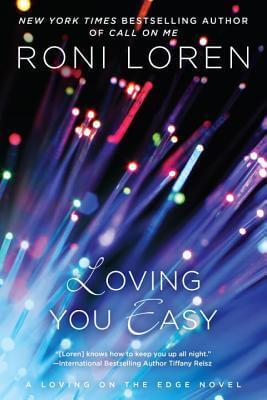 Loving You Easy is the latest installment in the Loving on the Edge series. While it is book nine of the series, it can easily be read as a standalone novel. There were mentions of earlier characters and relationships, enough to spark my interest but nothing intrusive.

Cora Benning is an IT expert who was raised an over-protective cop mother. Cora loves solving puzzles and has found great satisfaction in helping out the police with crime busting, which she does on a pro bono and volunteer basis.  Cora has started her own IT security business after resigning her job with a big firm after being passed over for a promotion because sexism.

Cora is a tomboy who likes to wear androgynous clothes. She doesn’t feel comfortable in dresses and heels. She prefers jeans and combat boots. She’s tall and not terribly curvy and she has always thought of herself as unsexy. Her limited sexual experience has left her firmly of the view she is no-one’s first choice – they way she thinks of it, she’s the option a guy takes when there’s no-one else around, a convenient body but that’s about it.

Cora has started playing an online game called Hayven which is a kind of Second Life for kinksters. She is not confident either in her body or her desires and Hayven is  safe way for her to explore. Her avatar “Lenore”, is nothing like Cora in looks though.

Cora had created Lenore to be the woman she thought people wanted, who she thought she was supposed to be.

Cora has been having private scenes with Master Dmitry and their online relationship is building her confidence in her submissive desires. They don’t know each other’s real names and when they talk via the game, there is automatic voice distortion/alteration but somehow what they share feels real.

When Cora attends a party and sees a man mid-scene with a woman (he’s getting a blow job in a consensual cuckolding scene that the woman and her partner had asked him to to be involved in), she realises that her desire for submission is not virtual only. She’s also horribly embarrassed to be caught watching. Ren, the man in question, is intrigued and turned on by the sexy woman who was watching him in the hallway but she bolts before he can do more than flirt with her.

Ren Muroya and Hayes Fox have been best friends since they were 17. After finishing college, they started up their own business, combining Ren’s artistic skills and flair with Hayes’ technical knowhow. One of their games is Hayven. Just when their business was really taking off, Hayes was arrested, tried and convicted for a crime he didn’t commit. Ren worked tirelessly for three years to have Hayes’ conviction overturned and Hayes has now been out of jail for six months.

Hayes and Ren are both Doms and have, in the past, shared women during a scene. Ren is openly bisexual, Hayes is mostly straight. But there has always been something there between them bubbling away below the surface.

“Show me you’re not too drunk to be making this decision.”

Ren smiled, stood steadily on one foot, and started reciting the alphabet backward. Hayes cut him off before he reached A. “Undress me.”

(May I just say, I’d struggle to recite the alphabet backwards at all.)

When someone (not Master Dmitry) from the game intrudes into Cora’s real life in a scary way, Cora does some digging and realises that Hayven has been hacked. Someone is messing with the profiles and sending out fake emails to account holders. Worst case scenario, someone is going to get very hurt. When Cora notified the company’s owners, they end up hiring her to identify the hacker and close the loopholes he accessed.

For one reason or another, Ren, Cora and Hayes all feel “other”. They find in each other their perfect fit. And that is the strength of the book. The relationships between Ren and Hayes, Ren and Cora and Cora and Hayes, as well as all three of them together are wonderful. There is a lovely chemistry and sympatico between them all. The various sexual encounters the trio have are super hot and illustrate the way they feel out be other.

I didn’t love the reason Hayes was sent to jail

aggravated rape resulting from a scene which was actually consensual rape fantasy – hows and whys are explained in the book along with acknowledgement that the vast majority of reports of sexual assault are truthful
but it was so integral to the plot the book wouldn’t have worked without it. It’s possible to take the view that you have written enough about BDSM-gone-right that throwing in a BDSM-gone-wrong (really wrong) story might not be unfairly stereotypical but I can’t say I like this trope all that much.

The suspense plot, apart from that aspect, fell a little flat for me. The villain was obvious very early on in the piece and I was a little confused about what actually happened to him. As far as I can tell, he wasn’t apprehended. Maybe he will return in a future story?

Also, there was a significant conflict which was basically glossed over. I’d been dreading Hayes finding out that Cora’s mum was the cop responsible for putting Hayes in jail, thinking that this would be a major source of discord, particularly given how important trust is to Hayes. But in the end it was no big deal. There was also another thing near the end where I really wanted to know what Hayes was thinking but unfortunately, the reader was restricted to only Ren’s and Cora’s POV in that part.  It felt a little like the book needed to be wrapped up quickly so, ba-da-bing ba-da-boom, HEA! I’d have liked a little more time spent on fully airing those issues.

“I won’t lie to you, Cora. I never have.” “I believe you.” He ran his thumb over the top of her knuckles. “And I won’t use you. I can’t tell you what’s going to happen tomorrow or the next day. But I promise that whenever I’m with you, there’s no side game going on, no secret subtext that you’re not a part of. I’m just feeling my way through it like you are.”

The other aspect I loved was that Cora was really the superhero of the story. It is her actions which identify the bad guy and it is her skills that save the day.  I liked the way you showed Cora as being both kickass and vulnerable and how formidable she became when those vulnerabilities were met with truth and self-acceptance. I liked how smart Cora was and that this was one of the major draws for both Ren and Hayes. While there wasn’t a lot of the trio living their HEA, I was confident in their future and that they’d negotiate their way around any obstacles together.

Parts of the book may well be hard for some readers to manage however. Some awful things happen; while they were not super graphic, I did find them disturbing. (I’m sure I was supposed to be disturbed.)