REVIEW: Love is a Battlefield by Tamara Morgan

Though I’ve made the decision not to read any more Jane Austen fanfic – um, I mean homages to JA extending the lives of the characters she created, I couldn’t pass up this book which not really about any of the books JA wrote but rather about a reenactment society dedicated to those books and the world of JA. Nah, not really, in fact it’s about one of the members of that group who goes toe to toe with a hero dedicated to all things manly and Scottish. Kudos to you for managing to combine two of the most beloved tropes in RomanceLand. 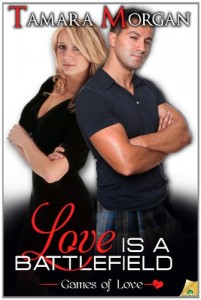 Kate Simmons might be a modern day bookstore manager but within her beats the heart of a woman in love with the romance and gentility of the books of Jane Austen. She’s also a dedicated member of the Jane Austen Regency Reenactment Society (JARRS) and has been put in charge of this year’s annual Fauxhall Gardens gala which they plan to hold on August 16th to celebrate the birthday of Georgette Heyer. Everything is spiffy except for finding a location near Spokane to host the event. So far, all the spots are either littered with discarded addict needles or far beyond the modest means of the JARRS. That is until Kate learns about a piece of public land that could be perfect. The only problem is it’s already been staked out by another group.

Julian Wallace might sound like he’s got a Scottish name but actually he’s part Asian/part Caucasian. He does brood nicely and looks damn fine in a kilt which he proudly dons while participating in the lifestyle introduced to him by his stepfather – the Scottish Highland Games. Julian competes in the hammer throw and this year is the year he plans on two things happening. The first is to take back the record once held by his stepfather which was wrested away by a rich knave named Duke Kilroy. The second is to secure a sponsorship from a whiskey distillery which would allow Julian to pay his expenses in this sport and also help support his mother and sisters. And no prissy group of women – regardless of how cute he thinks Kate is – who want to hold a glorified tea party on the same spot on the same weekend are going to get in his way.

So, there are two groups who both need the same land at the same time and two organizers who both have reasons very important to them to secure said land. Let the games begin.

The introduction of the main characters of Kate and Julian show, in a nutshell, exactly who they are and what is important to them at this time. Kate loves the JARRS, though she realizes that not everyone does. She dragged her best friend Jada to a ball and regrets it. Though Kate does laugh at the way Jada spices up the evening even if it causes some of the older ladies to swoon – and not in a good way. Julian is almost fanatically devoted throwing the hammer and being manly as he imagines the great Scottish warriors of olde were. But both are immediately attracted to the other and adult enough to try to work out a compromise over some drinks at a local martini bar only to discover that by “compromise” Julian and Kate each fondly imagine the other will give in.

Only this time, for almost the first time in her life, Kate discovers in herself an overwhelming desire to win. She’s been the good little girl, the easy girlfriend, the one who’s always given up or given in to the demands of others but damn it, not this time. So Julian wants to play rough does he? She’ll show him and everyone else that she’s got what it takes. For his part, Julian hopes that a bit of intimidation will send Kate and the JARRS running. After all, the Scots are better than the English any day. To his surprise, and a little bit to his delight, Kate doesn’t dissolve into tears at the roadblocks he puts in her path. No, Kate gets mad. And then she gets even.

I found that I enjoyed Kate’s various plots to get her revenge and wish that the results of one of them had figured more prominently in the scenes of the actual Games. Highland warriors in kilts plus Drag Queens would have been hysterically funny. Julian’s efforts to beat Kate made me just the slightest bit twitchy. You keep saying that his mother taught him to treat women better than that and Julian himself is uneasy but it seems that his efforts to beat Kate are a touch more mean spirited. Good for Kate that she never buckles. I also like how her friends are willing to pitch in and help her just as Julian’s are there for him. And if the two groups have fun in a hot tub while each trying to stake out the park, well no harm – no foul. The solution that Kate discovers and devises is ingenious and the scenes of how it plays out are some of my favorite in the book. The inclusion of dampening the women’s dresses is brilliant.

What do I think of the flow and resolution of the romance? I like it. You show Kate and Julian beginning to soften towards each other as a progression of them learning more about the other rather than a sudden thunderbolt of lurve. Though they start their relationship as seeming opposites, both discover how suited they are for the other and when they finally do compromise, it feels more even handed and something done for love rather than one or the other giving in.

One thing that I did get tired of is the repetition of Julian’s “Me Great Scottish Warrior. Have pair the size of grapefruits.” chest beating and testosterone oozing. Kate jokes that she almost believes Julian would whip it out and start peeing on the park grounds to stake his claim and I don’t think she’s too far off. I think Julian’s watched “Braveheart” a few too many times.

Still I finished the book with the feeling that Kate has a kilt in her future – and will be happy about that – and that Julian is going to end up cheerfully wearing his pantaloons and cravat to future JARRS events. And that’s why I read romance novels.