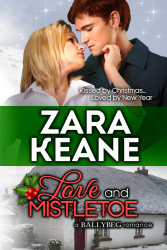 Kissed by Christmas, True Love by New Year
Policeman Brian Glenn wants a promotion. Studying for a degree in criminology is the first step. When a member of Ballybeg’s most notorious family struts into his forensic psychology class, his hopes for a peaceful semester vanish. Sharon MacCarthy is the last woman he should get involved with, however hot and bothered she makes him get under his police uniform. Can he survive the semester without succumbing to her charms?

Sharon’s had a rough few months. She knows her future job prospects depend on her finally finishing her degree. When she’s paired with her secret crush for the semester project, she sees a chance for happiness. Can she persuade Brian that there’s more to her than sequins, high heels, and a rap sheet?

This novella is as funny as the first book in the series “Love and Shenanigans.” Once again the setting is the small Irish town but it avoids cutesy or kitsch. I must head over to you-tube to ferret out some examples of Dublin v Donegal accents.

A lot needs to be packed into the story which begins with a police stake out that nets … bath bombs? which also focuses a spotlight on underfunded local Guarda which leads to how Brian is trying to better his chances at promotion through college. Turns out Sharon has similar idea only she wants to escape her lawless family and her mother’s fate of being married to a loser and raising too many kids.

Brian and Sharon have long history of animosity but as Sharon’s employer Bridie points out, Sharon must have some feelings for Brian otherwise she wouldn’t enjoy teasing him so. Brian certainly has noticed Sharon and what clothes she wears and her family but it takes their shared class and project to move them past superficial notions of the other and on to seeing below the surface. Still the switch over from Brian suspecting anything about what Sharon might be up to and going wholeheartedly into working together in their college class happens very quickly.

Once I’ve accepting their budding relationship, the long term history comes in handy to set the stage for a relationship which even after they begin to work together still takes a college class semester to mature to heading to Brian’s place with full knowledge of what they plan to do that night. Now that scene manages to combine hawt with hilarious – cheers to both of them for not hanging their heads and mumbling when Brian’s superior has to ride to the rescue with a key to the handcuffs. Instead they tell him to hand it over, they’ve got naughty stuff to get back to!

But as a sign of good things to come, Sharon is finding her growing relationship with Brian to be a revelation. Unlike her past boyfriends, there might be a future for her with him rather than just a brief hook-up with a bad boy whom she doesn’t really respect and who doesn’t respect her. However there is still some residual feeling in town based on Sharon’s family and her own past minor run-ins with the law.

Even though this is the fourth story in the series, I think it can be read alone. There are short and sweet references to characters from past books with enough thumbnail info for their place in this story but it’s not done all at once or overwhelming. I like the reality that not all the characters get along grand with each other. But Wiggly Poo is still fantastic.

The end, despite the lengthy – for a novella – build up time, did come off just a tad fast but the epilogue shows that even with that Sharon and Brian took their time making it permanent. The epilogue also hints, I think, that Sharon’s brother might have lost his effort to talk his wife down from her name choice for their daughter. Here’s to another fun trip to Balleybeg and kissing under the mistletoe. And with an intro price of free. Can’t beat that. B