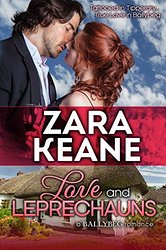 Olivia Gant is determined to escape her abusive husband and build a new life. Only desperation drives her to rent business premises from Jonas O’Mahony, the man who tattooed her behind and broke her heart. Can she maintain a haughty distance?

Jonas is a struggling single father. The last person he wants next door is the beautiful-but-infuriating Olivia. A childcare crisis forces him to strike a bargain with her: the lease to the cottage in return for babysitting. Can he resist her allures?

When Olivia’s ex is clobbered to death with a garden gnome, the fickle finger of suspicion points at Olivia and Jonas. Can they prove their innocence, or is their happily ever after doomed?

I was interested in Olivia and Jonas’s story the whole time I was reading the first book in the series, “Love and Shenanigans.” It was obvious from the way they fought and snapped at each other that they were meant to be.

The story has more drama and darkness than the “death by garden gnome” mentioned in the blurb might suggest. But it still has a lot of humor as well. Past and future book characters make their bows here but I think this is a series which can be hopped into at any point without feeling lost.

I found that the pace and plotting were not what I’m used to from a typical romance/mystery. Neither Olivia nor Jonas fall into drool fests when in company with each other – though when they do finally decide to take the plunge back into a physical relationship, they zip to it quickly. In fact, the first half is focused on fleshing out Olivia’s awful marriage – about which we’ve just got hints up to this point – as well as Jonas’s struggles to take care of his autistic son. I had honestly expected the murder to occur a bit sooner than it arrives but found myself just enjoying the leisurely set up of Olivia and Jonas’s reengagement with each other.

Once the murder takes place, the emphasis isn’t immediately on solving it. It’s more on how it affects the way the townspeople and their families view Olivia and Jonas – more in the fallout than the crime solving. Even for the reader, the culprit doesn’t jump out though I did run this person through my “could they have done it” filter. Finally with page space running out, everyone got down to business and found the clues needed to bring the culprit to justice. I wasn’t too surprised at the killer or motive but since the book is more romance than mystery, I was fine with the balance.

Jonas’s son Luca is a sweetheart but I saw him as more of a prop. He is drawn sympathetically and without ableism or pity but he definitely serves as a fulcrum for Jonas’s issues and is, hate it say it, IMO a plot moppet. I do like that there are some relationships that still aren’t – and probably never will – run smoothly by the end of the story. Luca’s mother is never going to change while Jonas’s mother only grudgingly starts to accept Olivia in her son’s life. This felt more real than sudden rainbows and happy bunnies arriving out of the blue.

Since Olivia and Jonas had a long history and had once been in love, I felt the simmering attraction all along. Guilt and anger from a past event had had time to evolve into acceptance and understanding with one final thing laying all misunderstandings to rest. When they admitted their love, it felt right. The epilogue is just enough to advance the series on to the next book without clogging things up. I’m psyched about the hero for the next book and keenly trying to figure out who his heroine will be. B