So, this was an interesting book. It has a high concept. Cellist Andrea in modern San Francisco, when she plays her cello, can somehow create a crack in the space-time continuum and somehow commune with a young man her age, living centuries ago—who turns out to be none other than Isaac Newton. I admit, my knowledge of Newton is pretty strictly limited to what I saw in Cosmos. Newton was inexperienced with women, indeed, most likely a virgin, and a manic-depressive, possibly autistic alchemist. This doesn’t seem like fertile ground for a romance hero, but I admired your chutzpah. WHY NOT. 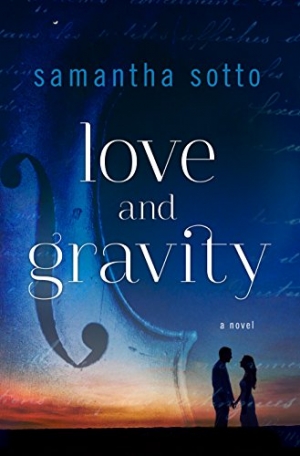 So the years pass, as Andrea and Isaac commune through this crack in time. He’s mischievous, he likes to create gadgets and he’s interested in slight-of-hand, she’s a dedicated musical wunderkind. (As with many romances, I felt like his character is stronger than hers. She’s not exactly a Mary Sue, but Isaac’s characterization is so specific and deeply kooky, and after I’ve read the book, her character feels more vague to me. She’s wealthy, talented, pretty and musical and given to volunteering in various countries in the third world. More than anything, she reminds me of the do-gooding one percenters found in the afterlife of The Good Place.) She finds out who he is when she’s a teenager, and there’s a nice running theme where she’s afraid she’s losing her mind. This is not resolved neatly either, which I appreciated. She also has a good friend named Nate, who is also afraid she’s going mad, or he is. Watch Nate—he’s not a wasted character.

After years of communicating, Andrea manages—with the help of Isaac’s mathematical formulae– to breach through the crack in time and goes back to 1665. And here’s where we have the first big problems in the story. Love and Gravity goes from clever magical realism/timeslip fantasy to a rather generic time travel romance. Andrea adjusts waaaay too easily to the 1660s. She only comments that she doesn’t miss her TV or global warming. Any difficulties of life in 350 years ago are glossed over—she “cooks” but it doesn’t mention the lengths she’d have to go to prepare a meal, given that she lives out in an isolated cottage in the country in 17th century England. This seemed pretty ridiculous to me, given we’re dealing with a rich woman from San Francisco in the early 21st century. It’s not like she can just go to Whole Foods. She is going to have to kill the chicken herself.

Also, her run-ins with the locals are minimal, but not a single one finds her odd. She’s thought to be “French” (her last name is Louviere). I would think there would be some tension with a modern woman from 2016 living in 1665 England, but perhaps you felt you had enough on your plate with the plot. You know quite a bit about Isaac Newton and math and music, but I don’t think you did as much research on the culture of 17th century England. I didn’t really get a strong feeling of the period from this section.

Andrea and Isaac have a lovely interlude in the 1660s (as much as I love reading about 17th century history, I can’t imagine I would want to spend a single hour in 1665, but let’s just go with it). She gets pregnant, and when she realizes she’s going to die of a breech birth, she manages to play the cello again and sends herself forward in time so she can get a proper C-section in 2016. Isaac is, of course, broken-hearted. The lovers yearn to be reunited, but how can this happen when Time itself is against them?

At this point, I was unsure how you would resolve the story. As much as I liked the book earlier, I was more annoyed than transported by the “romantic interlude” in the 1660s. However, I didn’t have much left, so I just pushed forward and hoped for the best.

Thankfully though, the story shifted back into clever timeslip fantasy again. And the resolution is very clever and well thought out. No spoilers here! I was very pleased with the ending. It’s not your standard Happily Ever After, but I think it worked well with the subject. Everything comes together most satisfactorily.

Anyway, this is a promising debut. Time travel books are HARD to write well, but I think you did a pretty good job. You know the genre, and you played with it confidently. The main weaknesses, I’d say, were Andrea’s characterization and the section of the story where she lives in the 1660s. But Isaac makes for a charming and offbeat hero, and the plotting is ingenious. Also, there are some really nice emotional beats in the story. The ending felt earned, and it all made sense.

I give this a B. I encourage everyone interested in time travel fiction to check it out!