Your book came recommended to me by a good friend who’s never steered me wrong so when she said she liked it, I put it on my to-get list. Sometimes I want the hot and smexy and sometimes I want the quiet, gentle love that creeps up on you like a dog trying to sneak a piece of chocolate off the kitchen counter. Yes, I speak from experience in how quiet dogs can be on their quest and no, I never let mine have more than one little bite sized piece at a time. Honest. 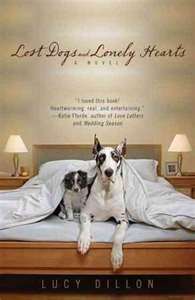 Rachel lost her lover, her job and her flat in one fell swoop and now finds herself out in the back of beyond sorting through her inheritance from her maiden aunt who ran a dog rescue/kennel. Rachel knows nothing about dogs and less about estate valuations but she’s getting a crash course in both since there are dogs on hand needing feeding, walking and cleaning up after plus a mother nagging her about silver backed brushes and old albums to be on the lookout for. With nowhere else to go and nothing else to do, she finds herself falling into the rhythm of life there – or does after 7:30 each morning when kennel manager Megan brings up the morning cup of tea.

Johnny and Natalie have the perfect married life which can only be improved on by the child they look forward to adding to their happy family. Only, after a year of letting nature take its course, nothing has happened and both are beginning to dread sex rather than revel in it. When Natalie is “redundanced,” they decide to take on a foster dog – lovable basset hound Bertie who never met a sausage or bacon sarnie he didn’t want to get up close and personal with. Not to mention lovely, nasty, smelly things to roll in.

Zoe has her hands full being a single mom to two young boys and trying to balance all the guilt gifts and bribes their father loads them with on his custody weekends. But a mobile or a trip to a fun park is nothing compared to the untrained puppy Spencer and Leo come home with. Toffee is darling but he does wee, chew, cry and need almost as much looking after as do the boys.

Can Rachel discover her inner dog whisperer, pay the Inland Revenue bill and possibly find romance with a man who wears cords? Will Johnny and Natalie’s lack of fertility bring them together or drive them apart? And can Zoe train a puppy and two boys as well as rediscover how to flirt when a man seems attracted to her? All everyone is looking for is just a chance.

Okay, I’m a sucker for animal stories and you manage to strike just the right balance between heading-towards-sob territory before pulling back and delivering happy. A good friend of mine was involved in breed rescue for years and I am so happy to see so many of the things she used to say about rehoming dogs mentioned here – and not in a preachy, index finger pointing sort of way either. The information is easily slipped into the story in an informative way instead of a judgmental one. I also like the pointers you include after the story as well as the little quiz to guide people on what is the right dog for them. If more people researched breeds before buying the latest hot fad in dogs…. /rant.

What continually stuck me as I read the story is how realistic these people are and how understandable are their problems. Rachel is an older woman who’s made mistakes in her love life and now she has to recover from them as well as suddenly dealing with long standing yet never talked about family issues stemming from her aunt’s relationship with Rachel’s parents. Add to that some sibling comparisons with her sister and Rachel’s way of dealing with stress (the time honored “I’ll think about it tomorrow.”) and I totally get her. Her romance issues coupled with her age and that of her maybe-partner are not the usual for a romance story and I was delighted that their special concerns are treated seriously. For two people used to doing what they want, when they want for 40 years, suddenly making room for someone else is a big change.

Likewise the strain that appears in Natalie and Johnny’s relationship as they struggle with temperature charts and ovulation tests before the real reason they haven’t conceived lands like a grenade in the bedroom. I appreciate that at the end of the book, they have options to pursue but have both realized and vocalized their firm belief that children or no children, their marriage is strong and if need be, more than enough for a happy life together.

I am filled with admiration for anyone who manages to be two parents after a divorce and it goes double when the other person tries to play dirty and be the “good” parent. Poor Zoe’s struggles to maintain discipline, puppy potty training and work full time sound like things friends of mine have gone through at various times. The heartbreaking reason behind her oldest son’s acting out makes perfect sense and I would bet most people can remember something overheard at his age which they tried, and failed, to reason out with their child’s understanding. The book ends with Zoe tentatively entering a new relationship yet as with the others, while nothing is firm there’s a hopeful feel that makes me smile.

With a title like “Lost Dogs and Lonely Hearts,” I was a little afraid it would be too treacly, too heartstrings tugging in a manipulative way. I didn’t want to hear sad violins playing or see entreating dog eyes pleading. I was also hoping to avoid same old-same old. I think the book does – or doesn’t – do all this, as the case may be. You write well rounded characters and then give them real life problems, not all of which can or will be solved by book’s end. But I feel that everyone here – dogs included – gets a good shot at a second chance. B
~Jayne

→ Jayne
Previous article: Thursday News: More About Mars; Ebooks are for genre readers; Print books are for the literary fiction readers or so says David Hewson
Next Post: REVIEW: A Breath of Eyre by Eve Marie Mont