REVIEW: Lord of the Abyss by Nalini Singh

This is the fourth book in a connected series with the three other stories written by three other authors. I haven’t read the other three and I don’t feel like my reading experience was impaired in any way.  The prologue lays the table.  A long lived people leaved peacefully and prosperously in the land of Elden until they were attacked by a Blood Sorcerer.  In a last ditch effort to save her children, the Queen of Elden cast a spell to fling her children far away from Elden so that they would survive and come to reclaim their birthrights. 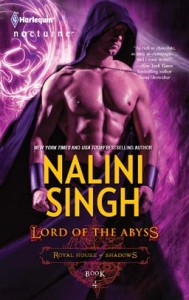 Micah, the youngest, became the Guardian of the Abyss, Lord of the Black Castle, and within his castle sits the gateway to the Abyss, “where the servants of evil were banished after death to suffer eternal torment at the hands of the basilisks and the serpents, and he was the guardian of that terrible place.”  He was encased in a full armor of impenetrable black and there were razors over his knuckles and bladed claws at the ends of his fingers.

Liliana is the daughter of the Blood Sorcerer. She has been practicing her own magic, secretly, as she is viewed as a disgusting failure by her father.  She is working to defeat her father and the prophecy requires the return of all four of the heirs of the Elden kingdom.  Micah, however, has not been found until now. Her magic brings her to the feet of the Lord of the Black Castle whereupon she is whisked off to the dungeons.

Micah has no memory of Elden but Liliana intrigues him. There has never been an intruder in the Black Castle and while her appearance is not “prepossessing”, she looks him in the eye which no one ever has the courage to do.  What’s even more remarkable is that Liliana is truly a different looking heroine:

She was…mismatched, he thought. Though her skin was a smooth golden brown that reminded him of honey from the redblossom tree, her eyes were tiny dots a peculiar sort of nowhere color and her mouth much too big, her hooked nose overwhelming every other feature. Her hair stuck out in a stiff mass akin to the straw in the stables, and she limped when she walked, as if one leg was shorter than the other.

A hook nosed, tiny eyed, big mouthed, limping heroine? Later it is further revealed that her breasts are tiny and her butt is huge not to mention one leg being smaller than the other.  Matched with a hero that looks like a god?  I’m all in.  And the story doesn’t disappoint.

The Black Castle is full of misfits from the Brownie, Jissa, to the factotum, Bard, and it’s master, Micah.

“You will fit in very well here, yes, you will,” Jissa said with a sudden smile that gave her a quixotic charm.

“For he is the only creature of beauty, and even he turns into a monster.”

Micah has no memory of his past.  He is only Guardian of the Abyss.  Cleverly, Liliana gets a position as cook and uses delicacies from Elden to jog Micah’s memory, hoping that in doing so he will break the curse and return to Elden in time to fulfill the prophecy and defeat the Blood Sorcerer. Her cooking leads to stories of Elden.

Liliana may be ugly and Micah may be beautiful but they are both lonely and unhappy. Micah lives the next day just as he did the last, surrounded by a few loyal servants and spending the night hunting the worst kind of souls and hurtling them into the Abyss. As the Guardian of the Abyss, Micah feels dirty and ugly as well. Liliana has spent her days avoiding her father whenever she could, learning to avoid shows of affection for anything from animals to people as her father always used those as weapons against her.

They grow to love each other. It matters not what Liliana looks like or how Micah has no experience with women. Together, these two fit each other in a carefully constructed romance in a shorter space (category length). For those readers who have found a Singh hero a bit too alpha for their taste, I think this would be a better fit. Micah’s sexual awakening is sweet infused with the trademark Singh heat.

The ending, however, was a huge disappointment. I believe someone told me that Lord of the Abyss is suppposed to be a fairy tale (or fairy tale like). Viewed through this lense, I suppose the ending made sense but I was ultimately disappointed because I felt it was unnecessary and would have been unconventional and fresh not to have chosen the ending that was included.  It diminished my pleasure in the story and I felt that after having so much of the book moving outside the boundaries, this just dragged me squarely back into romance central.  B