I both liked and didn’t like your novella Lieutenant Samuel Blackwood (deceased).
I was attracted to it as soon as Jane offered it to us, because your email mentioned it was a penny-dreadful styled ghost story, and I love the ghost stories of the Victorian era (it’s set in Georgian times but the style it’s written in is from the Victorian period). I didn’t realize it was a romance, and a MxM one, until fellow reviewer Jayne mentioned it in an email when I was already 20 pages into the 80. 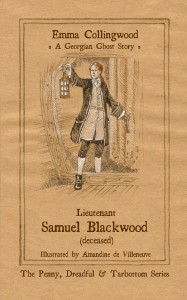 And therein lies the duel nature of my feelings toward this piece. As a Victorian-style ghost story you did an admirable job, beginning with the naval men around the fire hearing a hair-raising story about a cursed ship from one of its men. I was surprised and pleased when at the quarter mark it shifted into present tense and the most intriguing character of the first part, Daniel Leigh, decided to challenge the curse himself by joining the crew.

There were hints about the sexual inclination of the captain, but everything was all done so subtly that I thought this was a ghost story in which one of the main characters just happened to be gay. I’m a fan of MxM romance, but I don’t have to have it everywhere I turn.

Then out of the blue the main character, whose point of view we’d been reading all this time, declares his love! To say that it shocked me is an understatement. I understand Georgian gentlemen keeping this sort of thing to themselves, and indeed we get just the right amount of information concerning people other than Daniel, just what he’d know. But the story is told from Daniel’s close point of view, and I would have expected some idea of his feelings prior to this, other than that the captain’s smile of approval at one point made him happy. It would do that for any underling, so I don’t consider it to be sufficient to support this kind of thought at the moment he suddenly declares his love:

Did he know that Daniel tried so hard to excel in all his duties because keeping the ship in top condition and the crew at bay was Daniel’s personal notion of a declaration of love?

I don’t know if the captain knew, but this reader sure didn’t and she should have at least had some idea of it. So I was quite disappointed in the characters turning to romance because it just felt out of place, and was glad when the bump of their interlude was past and we were back to the story of the cursed ship. The ending to the story was quite suspenseful and I loved the unique approach you took.

The sea and ghost story were very well told. You have a real knack for capturing the period and the cadence of such works. (One small note: ‘dickhead’ stems from the 1960’s according to several online etymology resources, so it wouldn’t have been used in speech by Georgians. I’m not one to be picky about this sort of thing, but that one instance of hippy-era slang really threw me out of the story for a moment.) The rest of the work made me feel I was aboard a ship of the period. I’d love to see what you could do with more pages at your disposal.

Regarding the book itself, the price might seem a little steep to some, $10 for an 80 page booklet. I don’t actually have the booklet in my hands, but from the pictures on your website you were going for a very authentic look in recreating the ‘penny dreadful’. The illustrations are marvelous and Amandine de Villeneuve is to be commended. It seems that the physical copy may well be worth every penny, but as I’ve said, I don’t have it to be able to say (Readers, the author did offer it, but I was hasty and read the e-copy she sent. It is only my fault.). I don’t see an e-version being offered though that is what I read.

In summation, I wouldn’t suggest this to fans simply looking for a MxM romance, as the speed with which romance was introduced and the little face-time it was given made it unconvincing. As an old-fashioned ghost story set at sea however this excels, and anyone who likes those would enjoy the booklet for that alone. If the physical copy lives up to its pictures, it would only add to the enjoyment. Grade: B.

This book can be purchased in hardcopy, the way I’d recommend buying it if there is a choice, here on the author’s website.

→ Jan
Previous article: Coming Out of the Closet
Next Post: REVIEW: The Seduction of the Crimson Rose by Lauren Willig