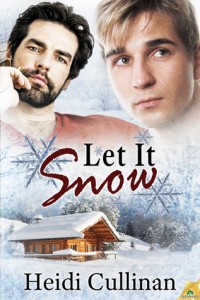 I’m a fan of your writing so I was excited to read Let It Snow.  It starts off with a “Goldielocks and the Three Bears” vibe but I was pleased it did not much more than give it a nod.  Also, while I don’t mind stories with threesomes and moresomes but it’s nice to read a book where the opportunity exists but the characters choose differently. I kind of makes a nice change.  (That may say something about my reading list.)

Frankie Blackburn does have golden hair and he does stumble upon a cabin during a blizzard and fall asleep.  (But he falls asleep in “papa bear’s” bed (the sofa) instead of baby bear’s bed.)  The cabin is occupied by three “bears” – lumberjacks no less. Arthur and Paul have a somewhat unusual relationship dynamic where they are good friends and have (very) regular sex but it doesn’t appear to be true love for either of them.  Rather, they are having sex because there’s nobody else on the horizon.  Marcus thinks on a number of occasions that he’d wish they’d find other partners and go back to being just friends because they do better at it.  It gave Arthur and Paul a story all of their own and while it didn’t particularly go anywhere, it showed they were there not just to be the other two bears in the plot.  They had lives independent of Marcus and Frankie and it lent the story a texture I appreciated.

Marcus is the biggest, burliest and hairiest of the cabin’s occupants; hence “papa bear”.  He’s a lawyer by profession and educated in philosphy and English as well, but after a bad breakup, he returned to his hometown of Logan, Minnesota, and has turned his back on both the city and practising law.  He’s enjoying logging and isn’t really thinking much beyond the day to day.   He’s still licking his wounds over his cheating ex-boyfriend Steve. Marcus’ mother has Alzheimer’s disease and is in a local care facility.  He feels guilty that he “wasted” time in the city he could have spent with his mother before her illness became as pronounced as it is and he sees her every day, weather permitting.  Some days are good days and she remembers him.  Other days, becoming more frequent, she does not.  This Christmas is probably the last one where they’ll have a chance to celebrate in any mutually meaningful way.

Frankie is out – he regards himself as embodying all the gay stereotypes – he’s “swishy” and “femmy” (he questions his own masculinity quite a bit and is used to, but still hurt by, the slurs of others).  He’s always frightened.  He leads a “safe” life.  He doesn’t go to new places; he likes the gay community in Minneapolis-St. Paul because he feels safer there – he thinks it’s less likely he’ll be gay-bashed.  High school, where he came out by default really because no-one would believe he wasn’t gay – was a nightmare for Frankie.  He was always waiting to have his head shoved down the toilet and he lives his life like he’s still waiting for it to happen.

To add to that, Frankie feels a bit of a failure to his family – while he loves being a hair stylist, is very good at it and it makes him happy, his family are all very well educated and,  he feels he’s a disapointment to them.  The parts of his parents we see on page are accepting so it’s hard to know how much of that feeling is Frankie projecting or whether it was something which bothered his family but which they now are fine with.

When Frankie gets lost and ends up in Marcus’s, Arthur’s and Paul’s cabin, he is very drawn to Marcus.  But Marcus, because Frankie reminds him in many ways of his asshole-ex, Steve, is very much the grumpy old bear and Frankie is afraid of him.

I liked that things changed when Frankie confronted Marcus about this and that’s when their mutual attraction was revealed.  Frankie stepped up and out of his comfort zone without anyone prompting him to do so and it marked the beginning of his transformation I think, even if it wasn’t entirely a linear process.

I would have been uncomfortable with the description of Frankie being “femmy” – indeed, I was initially, but this was dealt with throughout the story.  Marcus speaks specifically to Frankie on a number of occasions about what it means to be a man and encourages Frankie to own his personal masculinity.  I liked the way this was dealt with in the story.  Frankie is not a “girl”.  He is a gay man.  And the story makes that clear in a number of ways I appreciated.

How the hell Frankie thought he wasn’t masculine, Marcus would never know— he’d fucked girls, and there was absolutely nothing feminine about the way Frankie pushed at him, wiry muscle taut in his arms, hips firm and forceful as they ground against Marcus’s. This was saying nothing about the hot, needy cock throbbing in Marcus’s hand and driving his own dick crazy.

“Quit calling yourself unmanly. You’re your own kind of man, princess fantasy included.”

The other thing I liked about the story is that both men make changes in their lives of their own volition.  They do it for themselves.  Sure, they’re hoping it will lead to a happy ever after (less so Marcus in this respect) but the motivations are about themselves.  They aren’t making changes in order to be the person (they think) the other needs.  Frankie’s fears are highlighted and challenged. He realises that nowhere is going to be completely safe and he decides that life is worth living and he’s going to start fighting for what he wants.  Marcus embraces parts of himself he forgot he enjoyed when he left the Cities; things he had associated with his asshole-ex.

I also liked the sensitive way Marcus’ mother’s Alzheimer’s was handled in the story.  There were no miracles here.

I did think it was a bit unusual that tiny Logan had such a high gay population – that and the “Goldielocks” parts of the story lent it a somewhat fairytale aspect.   Marcus and Frankie fell in love very fast, but I was willing to suspend my disbelief and the snowed-in/pressure cooker environment of their first week or so together helped me in this.

Even though the page count indicated the story was 175 pages long, the story finished at 154 – as is often the case with this publisher there is a lot of filler (excerpts and the like) at the back.  So: be warned.

I thought Let It Snow was a cute and sexy Christmas story but hidden within the fairytale there were some important messages about being gay, masculinity and also,  being afraid and being stuck and how to move 0n/out of both of those things.  I liked it a lot. Grade: B.

→ Kaetrin
Previous article: Thursday News: A battle over the Anarchist Cookbook, return of The Girl with the Dragon Tattoo, the Popular Romance Project called government waste, an amusing assortment of calendars, and Gawker’s ability to boost the viral signal
Next Post: REVIEW: Mine Under the Mistletoe by Kat Latham