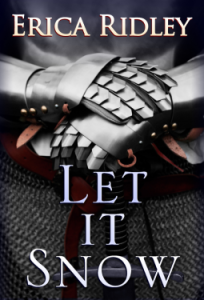 Adventurer Lance Desmond needs to produce a fortune before his arch-rival collects the bounty on his head. He risks an ancient curse to retrieve treasure hidden within icebound Castle Cavanaugh, only to become trapped inside. Not with the gold he so desperately needs, but with medieval Princess Marigold who’s been cooling her heels since . . . well, medieval times.

The lonely princess refuses to acknowledge the blossoming attraction between them. Not just because she deserves a better future than a penniless rogue. But because at midnight, he’ll vanish like all her other would-be heroes. And the evergreen in the parlor will have one more figurine hanging from its boughs . .

After attempting to read and failing to finish another of your novellas, I doubted I’d be trying another. I’m sure you probably didn’t want me to either. Nevertheless, something about the blurb for “Let It Snow” brought to mind another paranormal novella I’d read years ago that featured a cursed heroine and a hero who set her free. I liked that one and hoped that similar blurb = similar outcome. And what the heck, as far as time commitment we weren’t talking about one of those epic fantasy tomes that gives you back strain just lifting it. So … onward and off we go.

I was delighted from the first chapter. What a weird, wonderful mix of fantasy and smart phones. Swashbuckling and Candy Crush. And there are apps to handle all those dusty old magic spell books – beats having to get those cranky, huge metal hasps open whenever you want to spell someone! Lance and his best guy buddy Sancho are hilarious as they discuss how Lance can earn quick cash and buy off the bounty hunter who’s set a price on Lance’s head. No way will Lance forgo his beloved dream of owning a pirate ship and sell it off, plus he’s in an installment plan with it and can’t get his money back before paying it all off.

With no better plan and despite Sancho’s misgivings, Lance decides to go on an adventure – he lives for that stuff anyway so why not make some quick dough – to the enchanted, iced over Castle which is said to hold a golden treasure. A grappling hook, some wall blasting, pseudo light sabers and lots of chutzpah, that’s all he needs. How hard can this be?

Very hard, as Lance discovers. Oh, it’s easy to get into the castle but like Hotel California, you can never leave. Actually a worse fate awaits him only Princess Marigold hasn’t the heart to tell him exactly what. Once she’s broken the news to him that “no the walls aren’t made of ice and they can’t be melted and if he keeps hurling himself at the now solid wall where the door was, he’ll hurt himself even more than he already has” she thinks she’s dumped enough bad news on him for one day. And if he knows how little time he has left, he might go mad or spend the last hours in a useless, panic filled frenzy.

Since Lance is the first person to take the news of his imprisonment with a laugh, and the first person to ask her about who she’s become after 600 years of living there and not concentrate on what she can do for him but on who she is, and he’s optimistic, and funny and he introduces her to the wonder of a Snickers bar, she knows it will break her heart when he disappears at the stroke of midnight – just like everybody else.

I loved this section of Lance and Marigold getting to know each other. Lance is an alright guy. He takes everything in stride, looks on the bright side and is determined to make Marigold’s birthday something special. He wants to give her the gift of happiness and once he’s made her laugh and lit her face up with a smile, he decides he could get used to doing that every day. Meanwhile Marigold is a woman after my own heart, an ereader with the promise of endless books to read makes her practically giddy. Through her revelations to Lance about life in the Castle for the past 600 years, he sees just how strong a person she is and marvels at her endurance.

But is there a hope in hell for them? The curse has lasted for centuries and although Lance is proving resilient, they’re still on the wrong side of the walls. Which is where that magic spells book that Sancho pushed on Lance might come in handy but only if between the two of them, they can discover what it really is that has kept Marigold a prisoner for all these years. Will she trust Lance enough to let go and thus earn her freedom and that of so many others?

Okay, this part had me sniffling. Anyone who’s ever lost someone and faced the rest of their life without them will know what Marigold faces, accepts and rises above. Lance is right about her being strong and having learned a thing or two over the years. And just when I’d worked through the hanky I had been using to dab my eyes, along comes a funny scene to wind everything up and send our two lovebirds on their beginning lifelong adventures. B