Ever since a good friend of mine suggested I read your Cambridge Fellows series, I was interested in your take on the M/M novel.   I was told that the sexual relationship was tame compared to the majority of the market and the book had a fun historical aspect.   Now I trust this friend in M/M recommendations, so when I got the book and started reading it I had fairly high expectations.   She was the same person who introduced me to Whistling in the Dark (which totally blew me away), after all.   I think fans of that same type of book will be pleased with Lessons in Love like I was.   If they’re in for a little mystery with their romance, that is. 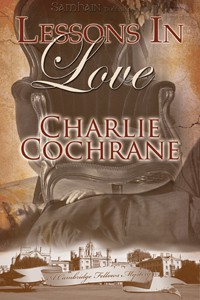 Professor Jonty Stewart once took was a student in English at Cambridge and now he is a professor of English at Cambridge.   Jonty is ready to deal with a group of rowdy English majors.   That he can handle.   The appearance of Professor Orlando Coppersmith, however, isn’t as easily handled.

Orlando has always been a type of hermit among his colleagues at Cambridge.   Social gatherings are foreign to him.   His best friends are his favorite leather chair, the warm fire place, and a good book.   Coming in one day to find the unruly young academic, Jonty, in his favorite chair makes him feel both frustration and, surprisingly, amusement.   Professor Stewart manages to do what no other professor could accomplish: he has made friends with Orlando Coppersmith.

Slowly, the friendship of these two professors grows into something deeply affectionate.   Orlando has never been sexually attracted before this; yet he can’t help but notice that he thinks of Jonty as more than a regular friend.   In private they even use their Christian names, something they consider very personal.   The budding romance between the two clumsy academics is jarred when a student is murdered.

The two professors quickly get on the scene of death.   When it’s found that the student was murdered for homosexual reasons, Jonty and Orlando get scared.   What if they are targeted next?   What if someone discovers their secret affections?   And, most importantly, what happens if the murderer is left to kill more students in Cambridge.   Set in England, 1905, Lessons in Love is a fun and quick read that adds a well rounded mystery element to a historical gay romance.

M/M is a fairly new genre for me.   I started reading it this year, and I’ve been pretty happy with the few books that I’ve read.   I have found that, more than anything, I appreciate a well-rounded central couple, as in regular romance novels.   Jonty was probably my favorite of the two characters.   His position as the younger of the two educators would normally place him in the position of being the more submissive character.   I enjoyed your reversal of that, instead making him the more experienced of the two in romance and sexual activity.   He had a delightful attitude that was fun without being overboard, and it made his character one that you want to succeed.

Orlando’s dynamic was different, instead relying on his innocence when it comes to romantic attachments and two men having sex.   Since his relationship with Jonty never goes into a full out deal in this first novel, his fears involving the practice are somewhat of an unresolved problem.   At the end of the book a reader could easily just say that things work out based on the relationship, but it’s not something entirely resolved.   As there are subsequent books in the series, it would be assumed that it’s addressed in later novels.   I thought it was an interesting take on things, because Orlando gets these fears personified when he’s asked to dispose of a book of male sensuality a murdered student had at one point.

“You know that I would, so long as you also understand that I don’t want to do those things.”   Orlando shut his eyes and shuddered.   As far as he was concerned Lord Morcar’s books had been filled with filth and he didn’t want anything to do with such stuff.   When he’d been a young man, the total extent of his preparation for matters sexual had been his father teaching him that he should take a cold bath should he become aroused in any way.   He’d never had to obey the instruction.   And while Orlando had no idea what Jonty had been taught, he’d assumed it was something similar.

Jonty took his friend’s hand, speaking slowly and gently.   “I really do think you should tell me exactly what you read in those books.”

Orlando told him, in detail, becoming unhappier with every word.   It all seemed even more disgraceful when spoken aloud.

“Would you be very upset to know that I had done some of those things?”

“Jonty?”   Orlando didn’t know whether he was upset or not, just incredibly shocked.   He knew that Jonty had much more experience of the world in general than he did, but he’d always assumed that his friend was the same as him in this regard.   Still a virgin.   “I had no idea.”

You handled it deftly, and I especially appreciated the subtle but clear establishment that they were friends as well as more than.   Relationships of this regard require that kind of establishment, and it made the conflicts so much more personal because of their friendship and romantic love working in conjunction.

Their relationship makes up a good 50% of the novel, with the other half being the mystery.   I felt it was a nice balance, as you use every word with importance and don’t skimp on either aspect of the book.   I felt the romance had it’s moments more so than the murder aspect.   The mystery wasn’t officially assigned to Jonty and Orlando, and they weren’t extremely passionate about solving it.   The one thing I do think hinders the mystery aspect is that some people will undoubtedly figure it out based on their thought process.   I didn’t, but I overload on the hints for every character and can never really decide on a character to throw my suspicions toward.

On the romantic aspect, the one problem I had was that Jonty and Orlando agreed to halt their affections for the sake of their safety while the killer was on the loose, then they reenacted them and decided they could deal with it.   Then they would repeat.   That happened several times throughout the book, and I felt like people like Orlando and Jonty would have been sensible enough to at least try and stick with either one earlier on and make it as safe as possible, as opposed to changing their routine and never really getting a feel for what would make them safe and still let them do what they needed to do.

I found Lessons in Love to be an enjoyable read and a promising start to the Cambridge Fellows mystery series.   At 130 pages, it wasn’t too long or too short, and I found it to be the perfect length for the story.   Seeing the progression of Jonty and Orlando’s relationship should be amusing and heartwarming.   Skilled mystery readers may guess the criminal before the end of the story, and there are some issues with repetition of a worn idea, but overall I felt the novella was very strong and worthy of a look for those that like historical fiction like I do.   Especially those that are looking for M/M that isn’t so focused on sex. B