I read Rock Me, the second book in this series because I have a thing about tattooed heroes. The hero of that book was a tattoo artist, as is Seth “Ghost” Warren, the hero of Leave Me Breathless. Seth is also shaved bald (another of my favorite kinds of heroes) and he’s all kinds of rough around the edges, which is what makes his attraction to Macy Rodgers so fun to read. Macy is the uptight best friend of the heroine of Rock Me. She’s had a sheltered upbringing and until her hook-up with Seth in Rock Me, was very judgmental of any lifestyle choice she didn’t understand. But her chemistry with Seth is undeniable, and every time they come in contact the tension in the room goes up, and someone ends up naked (usually Macy). But Seth had moved away from Macy’s hometown in order to care for his elderly grandmother, so their flirtation/hook-up ended when he had to leave. 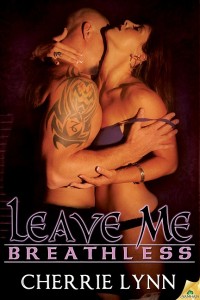 It’s Valentine’s Day, and Macy’s girlfriends have forced her to go out to dinner. Macy is morose, hating the holiday and the blatant reminder of her single status. Imagine her shock when Seth walks into the restaurant. He’s back in town, having left his grandmother in his sister’s care. He takes one look at Macy and their attraction reignites. Next thing you know, he and Macy are in the backseat of his car.

Macy and Seth are vastly different, and their differences terrify Macy. She’s a country girl, who rides horses, and has a stable job and is trying to please her parents. Seth looks like a bad boy. He’s tatted up, has piercings galore and works in a tattoo parlor. But Seth is determined to show Macy that it’s their differences that make them stronger as a couple. He knows that at their core, they want the same thing.

I really enjoyed this book. Macy was definitely an uptight heroine. She tries very hard to be proper, but also realizes that she’s been really judgmental in the past and she needs to grow-up and let people live as they like.  Seth pushes Macy’s boundaries, not just sexually (although, he definitely pushes her there), but also he pushes her to break away from old fears and try things that have scared her. And Macy supports Seth unconditionally as he meets his life’s challenges.

What was interesting to me is that you made Macy really unlikeable in Rock Me. She was constantly trying to tear the heroine and hero apart. But in this book, you redeemed her into a likable person, one who the reader hopes will find happiness. As for Seth, he’s an absolutely dreamy hero. He’s tough looking, but is really sweet to Macy. He’s got baggage, an ex-girlfriend who is a nightmare, and a sick grandmother, but he’s a loyal friend, and once he and Macy begin their relationship, he’s all in. They have tremendous chemistry and the sex scenes are incendiary (particularly one that involves sex up against the wall and an open front door).

I really love your writing voice, and think that you have a knack for creating heroes who veer outside the “norm” for Romanceland, and heroines who complement them.  While Leave Me Breathless is the third of a loosely tied series, it stands alone very well, and is, in my opinion, the strongest of the three books in the series. I give Leave Me Breathless a B.