REVIEW: Lawyer for the Dog by Lee Robinson 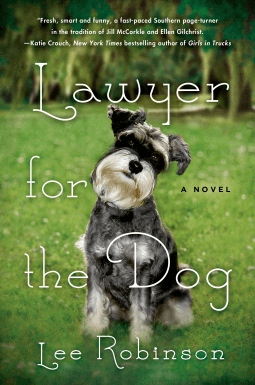 One of the sharpest attorneys in Charleston, S.C., Sally Baynard isn’t your typical southern belle. She’s certainly not what her mother hoped she’d grow up to be, especially since she divorced her husband, Family Court Judge Joe Baynard, and his historic family with their historic wealth and historic houses. Maybe Sally was never going to be a proper society lady, but her success as a public defender and family lawyer have been enough for her. She’s represented murderers, burglars, drug dealers and lately has taken on some of the thorniest divorces, all cases closed with her Sally Bright Baynard wit, charm and brains.

Or have they? One case she’s never successfully closed is her marriage. And when Judge Joe assigns her to one of his divorce cases by appointing her as the Lawyer for the Dog — Sherman, a miniature schnauzer– she’s forced into close quarters with him again. Juggling the needs of the dog, the angry owners, her amorous but uncommunicative ex-husband, her aging, Alzheimer’s-ridden mother, and the expectations of the court is more than Sally could have imagined. And as rascally Sherman digs his way into Sally’s heart, he brings along his charming vet Tony, a man who makes Sally question her views on love and marriage.

Forgive me if I say the reason I read the blurb for this book is because of a the dog on the cover. I know a friend who used to have a miniature schnauzer. I usually don’t like small dogs or schnauzers but I loved this dog. Spritzer was her name. When I saw the dog on the cover, I thought “Sprizter! I miss Sprizter. I must look into this book.”

Since the story is told from Sally’s first person point of view, it is important to like and trust her. I liked her from the start and she’s got a lot of common sense and practicality. She is a middle aged Every Woman. Her career may be not what she’d hoped for from back in her days of fiery defense of the poor and downtrodden but she’s made a life for herself, still believes in justice though she’s more realistic and tries not to use the word cynical – about how often it will actually occur, has too much on her plate and deals with a mother with Alzheimer’s.

I like that she’s satisfied with where she is in life. That she thinks her career is doing well, that she is successful, has had dates and boyfriends since her divorce and doesn’t feel she’s settled for less. In other words, she avoids the hopeless romance heroine clichés. I can empathize and sympathize with Sally with too much to do in a day and don’t look at yourself in the mirror in the afternoon sun because it’s going to show all your facial lines. I also wonder where my 20s year old self went too, sometimes.

I must offer fair warning when Sally speaks of her mother – the mother was probably born in the South in the 30s/40s and who has some viewpoints commensurate with that. Her daughter was supposed to marry well, have a big house with a maid and gardener.

So the dog needs a lawyer – almost like in a child custody case. Is this still “Only in America” or has the madness spread? Why does her ex-husband the Joe the judge ask her to take the case? She’s got a lot of common sense, a low tolerance for bullshit and judge is about to lose control of his docket. There might also be some unresolved feelings on his part due to marital issues he’s going through with his second wife. Sally quickly learns that dogs can be soothing, comforting, ready to listen when you need an non-judgmental ear. People also respond to you differently when you are walking a dog. I can also attest to that.

So everyone is wondering – or at least using it as an excuse to drag on the divorce process – what Sherman wants, what is best for him, who should get custody. Tony the vet has the best answer.

“They suffer, but not in the same ways. Sherman, for example, isn’t plagued by self-doubt. He misses Maryann and Rusty, and their disappearance is a mystery to him, but he isn’t worried that he did something wrong. He’ll allow himself to be comforted. He’ll accept your love without worrying about whether he deserves it.”

And I guess that’s the best way to go through life. Don’t worry so much, accept comfort and love and, in Sherman’s case, if you get a chance to roll in something stinky then life is good.

The book is really about Sally coming to terms with the issues in her life and is more women’s fiction with a romance thread and a HFN ending. Sherman’s okay and Sally appears to have a profitable new type of clientele plus one vet she’s getting to know better. It’s a lovely, gentle book with good characterization and subtle humor – Sally’s “memo to file” is hilarious. It’s not a fireworks story but a warm hug story which I thoroughly enjoyed. B