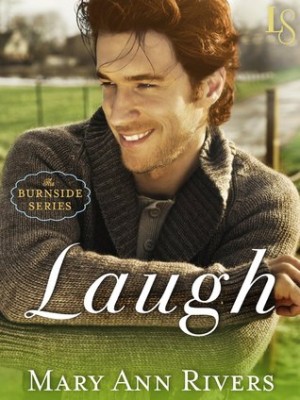 A romance genre version of Chekov’s gun: if an upcoming romance hero is kind of an ass in book one, we need to know why he’s an ass by book… well, whichever one is his story. (In this case, book two.) Laugh does a beautiful job of humanizing Sam, the difficult older brother from Live, without changing his character. What we didn’t know about Sam is that he’s living with ADHD — impulsivity and disorganization are inevitable parts of his life, even with medication and exercise. His intense love for his family and his need to see everyone happy and safe clash badly with his inability to control things, often making him volatile and overbearing.

When Sam meets city farmer Nina Paz, he’s attracted by her strong sense of community and the hands-on, systematic nature of the work she does, as well as by her beauty. (Both are on the mature side for romance characters, by the way: Nina is 38, Sam about the same. There’s some crows feet, silvering hair, and stomach pooching for Nina, if not for Sam.) Nina is equally attracted to Sam’s “surfer god” looks but after losing her husband, the boy she grew up with, it’s harder for her to dive right into strong feelings as Sam does. Having spent some time fighting her grief with extremely casual sex, she now keeps her affections centered on her extended family/coworkers; an unexpected crisis for one of them makes it even more difficult for her to let go.

The great strength of the story is a hero who’s unabashedly emotional. Sam is a born patriarch, in the best way: love and family are everything to him. He embraces his feelings for Nina with no reservations. And it’s the genuineness of his devotion, the fact that he truly cares about her more than he’s even in love with her, that wins out in the end. He’s also charmingly self aware, telling Nina this story about choosing to focus on family medicine: ‘nothing was clicking and everyone I met was an asshole. The thing is, I’m kind of an asshole, and I was worried about ending up a bigger one if I placed in some of these groups.’

Nina is less open and easily sympathetic, but as committed to the people in her life as Sam is to those in his. I was a little sorry more time wasn’t spent on her issues with her family of origin (as opposed to her family of choice); the child of legal Mexican immigrants, Nina is second generation American, a life experience that interests me. What we do learn about their conflicts around goals and choices seemed true to life.

I’m self-conscious about commenting on Nina’s portrayal as a Mexican-American woman, not having much of a knowledge base. Response to the book from Latina reviewers has been highly positive. But though this may well be a case of looking too hard for potential issues, some aspects of Nina’s past made me feel a bit squirrely. I’m glad to see a rare Mexican-American woman in a mainstream romance; I’m glad to see an even rarer woman who’s had an abortion (a decision made especially emotionally complex by the fact that it would have been her dead husband’s child) and still believes it was the right choice; I’m glad to see a woman who’s unashamedly had casual sex — but stereotypes being what they still are, I sort of wish they weren’t all the same woman. Or maybe I should wish that all of those things were so acceptable in romance, it wouldn’t even occur to me to question it.

Despite Nina’s cautiousness, she and Sam spark wonderfully together, both in and out of bed:

‘That’s the woo you’re gonna pitch? “Come on”?’
‘I already told you you’re pretty.’
‘When I come.’
‘All the rest of the time, too. I didn’t say that? I must have been too distracted by all the noises you were making while your tongue was in my mouth.’
‘Jesus.’
‘I think you were saying that, too…’

Their sex scenes, which go a little past strictly vanilla, are long and quite explicitly described; I was a bit put off by a sense of the physical stakes being raised scene by scene, as if the emotional content wasn’t enough to keep us interested.

The story is abrupt in places. Nina and Sam first speak at 2% on my ereader; they’re getting intensely physical at 7%, and it’s not a short book. Nina also gets the devastating news about her friend right after we first meet the character, before their relationship has really been established; it could have used more build-up. On the plus side, the writing has a less overwritten, flowery feel than Live sometimes did.

Like Live, Laugh has a cozy neighborhood atmosphere — the small town story set in a city. (It stands alone just fine, but I recommend reading them in order, to get the full impact of Live without spoilers.) The secondary characters are strong — if you’re not jonesing for more about younger brother PJ’s utterly sincere love for his former babysitter, I’ll eat my copy of The Windflower — and the portrayal of Sam’s life with ADHD is moving and spot on. (Once again, a Rivers story hits me right where I live.) Even with some aspects I didn’t care for, the humor, emphasis on community, and passionate feeling make it a lovely read. B