While I didn’t think the first two novels of your Inheritance trilogy were perfect, I liked that they were different and introduced some much-needed fresh air into the fantasy genre. I wasn’t sure what to expect from the final installment given that it’s about the child god, Sieh, and the thought of him being in a consensual romantic relationship made me uncomfortable. (God or not, he’s still a child.) Having had some time to mull over the book since I finished it, I reached the conclusion that I enjoyed it, but I think that romance readers might not find it as accessible as previous novels. 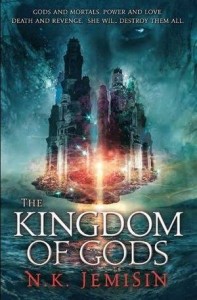 Kingdom of Gods focuses on Sieh, the child god first introduced in The Hundred Thousand Kingdoms. The child of Enefa (now incarnated as the new goddess, Yeine) and Nahadoth, he’s always occupied an awkward place. The oldest of the gods after the original three but also embodying the young, immature aspects of nature, Sieh can be a contradiction at times.

Since the book takes place long after the events of the previous two novels, the once-powerful Arameri family are diminished. Though they desperately cling to their authority over the world, it’s obvious their power is dwindling as the years pass. This becomes important because one day, while roaming the Arameri palace, Sieh meets the latest generation of Arameri scions, a pair of twins named Shahar and Dekarta. Which, if you’ve read the previous two books, are very unfortunate names to give a pair of kids.

Intrigued by the twins, Sieh follows a whim and makes a blood pact with them. Unfortunately, it ends in disaster with the twins being separated and Sieh landing in a strange decade-long coma. Even worse, when he comes out of the coma, another fact is realized: the child god is aging.

While the cover description is accurate, it’s misleading and only provides half of the picture. I especially don’t like the sole focus on Shahar when Deka’s relationship with Sieh is just as important to the story. This is a very different sort of book from the previous installments. More epic and in line with the narrative structures of standard traditional fantasy. It has a lot of originality and flair, but the structure and protagonist’s journey is more familiar. It brings all the pieces laid down in the previous books, especially in The Hundred Thousand Kingdoms, and brings it full circle.

I liked the fact that the narrative voice decided to change it up. Without spoiling, the previous two novels had “tricks” associated with why their stories were told the way they were. Except for the end in which there is a narrator change, here the narrative is straightforward. As Sieh says in the opening pages, the reader has no reason to anticipate an impending twist but can relax and enjoy the story.

As for the story itself, it’s a very different sort of coming of age story. With Yeine’s book, she came of age and gained power because she discovered she was the incarnation of a dead goddess. In this book, Sieh comes of age but the results are something entirely different. After all, what happens when the god of childhood (and all its related traits: mischief, trickster, etc) grows up and becomes mature? How can he retain his power then? So I enjoyed that exploration.

That said, I found the relationship aspects weak. I wish there’d been deeper interactions between Sieh and the twins. He spent a lot of the book running around to investigate a potential war. I know it was for plot-related reasons but because of this, Shahar and most particularly, Deka, ended up reading shallow to me. I did like that there were no easy answers for the relationship between Shahar and Sieh but by comparison, Sieh’s relationship with Deka seemed unexplored.

I’ve heard heard rumblings on the internet and via email regarding a child god having sex but having finished the book, I find myself wondering what those complaints were about exactly? Are there references to distasteful things that Sieh was forced to do in the past? Yes but those were more explicitly stated in the first book, and I don’t actually consider what happened in those cases sex. Rape, yes. Sex, no. Sieh, like his siblings, were enslaved by the Arameri and were abused. This was made abundantly clear and is further explored in Kingdom of Gods because Sieh knows how to carry a grudge. Or are they referring to a specific incident which, to my reading, was never described as anything but negative and traumatic. One of the underlying themes of the Inheritance trilogy is power and how it can be abused, and I feel that was what happened there. So, again, not sex. If the complaints were about the coercive aspects and not wanting to read about those interactions, I would completely understand. But the impression I got was that there was lots of consensual child sex which made me leery because that’s the last thing I want to read. I think it’s best to remember that Sieh is aging, physically and mentally — not by a matter of years but by decades. When he comes out of his coma, he’s a teenager; by the end of the book, he’s an old man.

My favorite part, however, was the ending. I thought it was beautiful and perfectly answered the question of what happens when child gods grow up. I liked the idea of a cyclical existence — that all beginnings have an end and that all ends promise a new beginning. I don’t want to spoil in this review but if anyone who’s read the book would like to discuss, I’d love to do so in the comments.

All in all, I enjoyed Kingdom of Gods. It is a different sort of novel from the previous two installments, following a personal journey across a more epic backdrop. But I think anyone hoping for intense relationships like those seen in Hundred Thousand and Broken Kingdoms should adjust their expectations accordingly. And as a bonus for those readers who were less than enthused about the ending of Broken Kingdoms, there’s a short story for you at the end of the novel. As for myself, I’m looking forward to the new trilogy coming out next year.