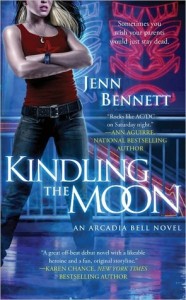 The first book in the Arcadia Bell series has been sitting on my shelf for months now, waiting for me to turn around and find myself in just the right head space to pick it up. It comes highly recommended across the board, but it was the praise from Sarah over at Clear Eyes, Full Shelves that had me committed to giving the series a shot. Is it weird to admit that I think part of what kept me from picking it up is that the world and/or characters seemed to be so magic-based? I never realized it before, but when it comes to my paranormal reading I definitely trend shifter/vamp as opposed to witch/demon. Stereotypes aside, I think the appeal lies in the physicality of those creatures and (in the case of shifters) in the constant battle between their dual natures. And, for whatever reason, I don’t often respond as positively to the more nebulous (albeit often subtler) powers of witches, demons, part-demons, etc. So I may have gone in a bit prejudiced, a bit worried Arcadia might not be the girl for me.

Arcadia Bell is a little bit of everything and a whole hella private. Proprietress of her very own tiki bar and amateur magician, she’s put a lot of time and effort into flying under the radar. In a world dominated by powerful magical factions where so-called Earthbound demons live side by side with humans, she’s just a small blip on the radar. Except that she’s totally not. The only child of one of the most infamous sorcerer couples in history, she went into hiding after her parents were accused of a series of murders that set the occult world on its head. For the last seven years, she’s been on her own. But when her parents’ case resurfaces and their innocence is once again called into question, Cady embarks on a mission to clear their names. A friend puts her in contact with somewhat shady demonologist Lon Butler who has, among his many questionable talents and possessions, an unparalleled magical library. Trust is in short supply, but Cady and Lon agree to collaborate as Cady is under a bit of a time crunch and Lon finds the case fascinating on a number of levels. They don’t have to dig very deep to encounter everything from cover-ups to secret societies, and before long everything Arcadia thought was true about her life is thrown into question.

It took me about 100 pages or so to fall into the rhythm of Cady’s world. I liked her from the very beginning. She’s independent. She has a sense of humor. And she likes to have fun. Perhaps most importantly, she likes her magic. She’s good at it. It’s what she does in her free time, always creating new spells, testing them out, learning more. I’ve read so many heroines who fear their magic, are ashamed of their magic, hide it for whatever reason. And that’s fine. But it was sort of freeing to read about a girl who, for all the hiding she did have to do, was up front about that bit of her genetic makeup. It becomes an issue at certain key points, with the few people close to her who don’t understand or who view things differently, and I like that it was important enough to her to be an issue despite all the reasons it would have been better if she turned her back on it altogether. I did struggle a bit finding my bearings in the drenching sorcerous politics of her world. The different demons were complex and many, and I occasionally lost focus trying to sort them out in my head. Lon brought an interesting angle to the whole thing, as I am nothing if not intrigued by renegade demonic intellectuals with their own private grimoire libraries. But then he had to go and sport a blonde pirate mustache and ruin all my fantasies. He was pretty darn prickly to go with it. Lon grew on me, though. With his hilariously endearing teenage son and his extremely murky origins.

I perused the bookshelves behind Lon while he sat with his feet propped up on the desk and thumbed through his tandem memory spells, reading the descriptions aloud to me.

“Memory Erase by Time Period designate a length of time to eradicate thoughts.”

“Memory Erase by Subject: designate a subject to remove from subject’s memory.”

“No, but you should keep that one marked. That could come in handy.”

He plopped a blue marker in the crease, then flipped to the next entry. “Complete Memory Erase: wipe out all memories of events, places, names, times. Jesus, that’s dangerous. Remind me to put this book in the locked cabinet. If Jupe got a hold of this . . . Okay, hold on. Memory Restoring.” He flipped through several pages then started reading to himself in low mumble, taking his feet off the desk.

“What? Did you find one? Memory Restore by Time Period?”

“So? What’s the spell? Does it need kindled Heka?” I leaned over his shoulder and read. “Memory Restore, otherwise known as ‘The Wheel.’ Push and pull magical energies to ignite slow memory restoration gently. That sounds like an overnight laxative.” I grinned at him.

“Ha, ha,” he said dourly, getting up from his seat to stand.

“Lighten up,” I elbowed him in the shoulder, then continued reading. “Magick for The Wheel must be charged with fluids from sexual arousal . . .‘” My voiced tapered off. “Oh.”

Yes, Lon grew on me just fine. And it was when the humor and the romance began to work together that the story really took off for me. Lon is a single father and has sole custody of his son Jupe. He is understandably cagey about his small family. This dynamic (along with the age difference between he and Cady) provided an added layer of complexity and emotion to their fledgling relationship.

Cady doesn’t harbor as much self-loathing as has become almost standard in a lot of urban fantasy heroines. Her confidence and willingness to go for what she wants impressed me. And yet she is consistently held back by the circumstances of her enforced anonymity and the actions of her cryptic parents. I became more and more afraid as her investigation progressed that the answers she found would bind rather than free her.

Kar Yee drew up her mouth as she stroked Mr. Piggy. “You are the most guarded person I’ve ever met, Cady. I think you have some black luck following you around.”

“You have no idea,” I muttered.

“You might be unlucky, but I don’t think you’re a bad seed, or I wouldn’t be in business with you, no matter how long we’ve known each other.”

That was true. Money was a very serious matter to her.

“But I think you need to get rid of what’s dragging you down,” she said. “Tear it out by the roots and be done with it. You should be happy, enjoying life.” She held up her hand and began holding up fingers. “One, you have a good job—”

“It’s good, trust me. And two, you are a smart and fair sorcerer—”

“—and three, you are very pretty, for a white American.”

“Your life should be better than it is.”

Kar Yee always had a way of cutting something down to its simplest form. She was right: my life should be better.

I appreciated how Cady’s thirst to not only reclaim her life but improve the quality of that life was the driving force behind her actions. She is also never too stupid to live and while she admits her mistakes, she never regards herself as terminally unlovable because of them. All in all, a very promising start. My copy of the sequel is on its way. B