REVIEW: Just Once by Julianna Keyes 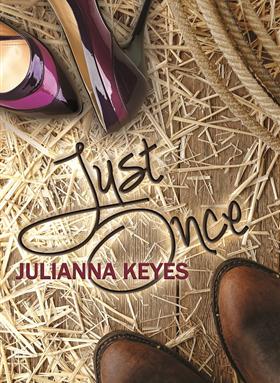 A treat in the form of your book Time Served showed up on my Kindle over the holiday week. I inhaled it, staying up late to finish, and then went hunting for more Keyes’ books. There was a single title–Just Once–and I began it the next day.

Just Once is the story of a wealthy, pretty blonde travel writer named Kate who returns to Ponderosa Pines Ranch in southern Colorado to help out for the summer. The ranch is a five star resort that runs just during the summer season.  This time, instead of being a cabin girl cleaning, serving and getting drunk at O’Malley’s (and earning the ignominious nickname Eight Shot Kate), she’s in charge.

Told solely through Kate’s point of view, we get to know the people she works with and the hot, silent, grumpy wrangler she lusts after.  Their meet cute is actually a fight followed by both of them stomping off in disgust. (It’s love at first sight as we readers know; the characters just take longer to get there).

In some ways, this is a class story. Kate’s only there for the summer. She has a lot of options including not working at all. But something happened six months ago and she’s determined to be a responsible grown up. That means no more dancing on the tables, drinking until she’s silly, and hooking up with good looking guys who cast smoldering glances her way.

That’s all in her past. But hot lumberjack guys cannot be put off forever.

Just once, we agreed. And that will be enough. It’s like what I tell myself before polishing off a family-size bag of potato chips: I shouldn’t do this, but if I eat them all now, it’ll take care of the craving and I won’t want any more later.

The book becomes unexpectedly hot. From the cover and the way the story started, I didn’t expect it. Lumberjack guy likes it rough and he likes to be in charge.

“I’m a very patient and understanding man outside the bedroom —” he begins, straight-faced.

He ignores me. “But in the bedroom, I’m the boss.”

“Who’s boss in the living room?”

“You’re the boss of everything?”

He leans over and slides his hand back between my legs, slipping his rough fingers through my swollen folds. “Yes, Kate,” he says. “I’m the boss of everything.”

As far as I’m concerned, Shane will never be the “boss of everything,” but at the moment I’m willing to let him have his silly little illusion.

I think the above excerpt rightfully captures their battles. Shane likes to be in charge and at times, Kate allows this. Of course Shane’s bedroom arrogance wouldn’t work if it wasn’t tempered with humility and vulnerability which is how Kate’s position balances the scale. She’s not an underling of his–he works the stables, barns, ferries the guests around. And she’s independent. She’s relied on herself for many years for all of her needs, including her sexual ones. Outside of the bedroom, Shane looks at Kate as out of his league and frankly almost everyone else does too. She’s wealthy, wrote a bestselling book, and is beautiful. Her coworkers, his coworkers, and her out of town friends all agree that he’s punching up.

While it’s not explicitly stated and we don’t get Shane’s point of view, his need to be in control is heightened when it comes to Kate because he doesn’t seem them as equals in most things.

As Shane and Kate finally settle into something that approximates a relationship after the air is cleared about why he’s constantly surly (“You were scared for the wrong reasons, Kate. I didn’t give a fuck about the bat. I wanted to bend you over the sofa”) and how she feels about him (), an external conflict is introduced. Shane wants to buy the ranch–eventually–and has been saving up for years. He thinks that the owners will be ready to sell in ten years and he’ll have enough saved by then. Only the owners want to sell now.

Money, station, expectations work there way throughout the book and hurtle toward the end. Kate learns to balance recklessness with responsibility and Shane learns to ease up on the control issues in order to keep something, everything, he loves. The beginning was a bit slow but overall, I found this to be a charming, heartfelt read.

For readers who are just discovering you through this book will be thrilled with Time Served because as much as I enjoyed Just Once, Time Served was even better. B

→ Jane
Previous article: REVIEW: Claimings, Tails and Other Alien Artifacts by Lyn Gala
Next Post: How I get things done