REVIEW: Just Give Me a Reason by Rebecca Rogers Maher 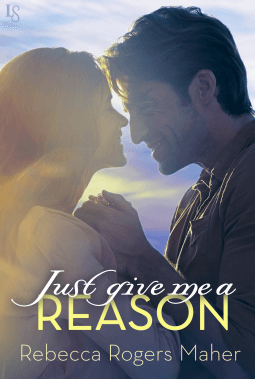 Tony Lopez is losing it. Burdened by a broken marriage and a failing business, the divorced father of two young daughters isn’t on his A game when he meets Beth. She’s clearly pregnant and defiantly single: a beautiful, graceful vision that lights a fire somewhere deep beneath Tony’s layers of self-doubt. They connect at his brother’s upstate New York home during a weekend among friends. Except friends don’t feel this kind of chemistry—or want each other so bad it hurts.

Beth Cody has no use for ties that bind. She’s witnessed that kind of wrecking ball. The father of her child isn’t in the picture, and she couldn’t be happier. So when Tony sends her already raging hormones off the chart with his rugged good looks and pent-up sexuality, Beth is thrilled to indulge in a short-term affair, with no strings attached. But one taste isn’t enough. And now that she’s out of her comfort zone, Beth either needs to let go or take a chance on a man who might just be worthy of her love.

As I read “Rolling in the Deep,” I said to myself, “Self, I hope she’s going to do something with the heroine’s best friend Beth because I really like Beth.” And voila, here is Beth’s story. Yay!

Though the characters in the first novel and this one don’t have the mental health issues of the previous series, they definitely do have some baggage. Beth is 7 months pregnant and quite happy that the biological father is not ever going to be in the scene while Tony is reeling from a divorce and desperately trying to save his failing business. They also both felt an immediate, visceral physical attraction to the other when they initially met months ago though for various reasons they never spoke about it or acted on it.

When the sexual punch of desire is still there and events conspire to put them together in a house, alone, for a few days, what will they do about it now?

Quite a few of the heroines I’ve encountered lately have been very self confident in their sexual desires and more than willing to see to them. Beth has avoided anything long term with all her past relationships but she is honest with the men she’s interested in and makes sure they’re aware that all she’s interested in are flings. Divorced Tony with two small daughters is far from the usual situation Beth seeks out but man, does he light her fires. Which brings me to my next point. In this book, I can feel the sexy instead of just being repeatedly told how sexy the main characters are.

So how are these two going to work out a relationship given everything standing in their way? The physical? They’ve got that sorted. But there’s a lot to be done before everything is done and dusted. They want to enjoy and take advantage of their “moment in time” alone together to just let this happen without strings or commitment. But uninhibited Beth has helped to free Tony of the emotional constraints he’d been willing to live within all his adult life. And Tony likes the rawness and freedom. Sex between them reveals facets of themselves, lets Beth and Tony learn each other in depth but also exposes things to each of them about themselves.

I’ll admit to being more on Tony’s side of the equation. Both change but Tony’s willing to not only admit this to himself – as Beth also does – but to her as well. He’s willing to lay it on the line, to go big, to go deep. Yet Beth’s the one who has to grapple with the biggest change and once she has the ovaries to face her relationship fears, I felt like I was watching the Grinch’s heart grow.

The story end is frankly, not what I was expecting. But honestly, it seems like the route these two should choose and the path they should start down on. Not hearts and flowers traditional but something all their own – day by day. B