Letting go is the first step to healing…or bringing it all crashing down.

When an avalanche of books cuts off access to his living room, university librarian Jasper Richardson can no longer ignore the truth. His ever-growing piles of books, magazines and newspapers can no longer be classified as a “collection”. It’s a hoard, and he needs professional help.

Professional clutter clearer and counselor Lewis Miller thinks he’s seen it all, but even he has to admit he’s shocked. Not so much by the state of Jasper’s house, but by the level of attraction he still feels for the sexy bookworm he remembers from school.

What a shame that Lewis’s ethical code forbids relationships with clients. As Jasper makes slow but steady progress, though, the magnetic pull between them is so strong even Lewis is having trouble convincing himself it’s a temporary emotional attachment arising from the therapeutic process.

Jasper longs to prove to Lewis that this is the real deal. But first he’ll have to lay bare the root of his hoarding problem…and reveal the dark secret hidden behind his walls of books.

Warning: Contains a level-headed counselor with a secret addiction, a bespectacled geek with a sweet tooth, a killer “to-be-read” pile, embarrassing parents, a van called Alice, and deliciously British slang.

I have read and liked your books before, but this one actually surprised me. It has significantly less sex scenes than the other novels. Do not get me wrong, for me it was a very pleasant surprise. You are one of the few writers who can sell me on the novel with a lot of sex scenes, but I will never complain if the book does not have as many for once. I thought considering the situation both main characters found themselves in, it made perfect sense for them to not jump in bed right away. I am just saying that if you are a reader who wants a lot of sex in the book, this one is probably not for you. 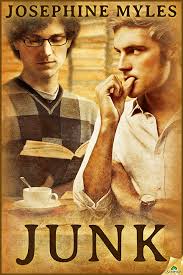 This book had me on the dedication. “For everybody who’s ever bought a book they know they’ll probably never get around to reading”. Don’t we all know that feeling? However as much as I was excited to read the book where one of the main characters is a book lover, I was also more than a little worried. The blurb indicates that same guy is a hoarder and I guess I was worried that his love for books would be equaled with hoarding; because of course I already felt a kinship with him before even starting the book. I was worried for nothing – hoarding and love for books never became the same thing in the story, hoarding was part of a deeper psychological issue he needed to work through and at the end of the story Jasper has his house clear and nice and his beloved books are now the collection, instead of being part of his hoard.

As the blurb indicates, Lewis is a professional clutter clearer and counselor who comes to help Jasper deal with his hoarding problem. I thought overall his recovery process was dealt with sensitivity and respect, but of course this is a romance so we have them being attracted to each other. And specifically we have the issue of counselor being attracted to his client and vice versa, which is one of the main sources of conflict in the story. I will admit, I am of two minds of how that was handled. Do not get me wrong, I think the writer did everything possible to soften the annoyance factor for me. Lewis had a crush on Jasper while they went to school together (they were not in the same year, but they spent several years in the same school), so it is not like they never knew each other before. Lewis struggles with his attraction *a lot*, and when he caves in, very soon they separate on his insistence to make sure Jasper can stand on his own two feet. But I guess I was still annoyed that he did cave in before they spent those months apart. What I was even more annoyed about is that all the friends Lewis was talking to about his attraction to his client advised him that he should just go for it. Thank goodness his father had the common sense to tell him that Jasper at that point needed a counselor, not a lover. But I could not believe that his sister, who is his partner in the counseling hoarders business, told him basically that he should just go for it. I am sorry, but what the heck? And her justification was that he was single for too long? Again, what the heck?

I told myself that the author devoted a lot of time to this issue and made Lewis commiserate on that and worry about that a lot. I told myself that I absolutely bought that Lewis was overall a decent, likeable, but flawed man. I told myself that surely I should not expect a perfection from the guy, especially since their interactions were so heartwarming and awesome. But I still could not completely let go of my annoyance on that issue. Wait till he is not your client anymore and then have sex with him, how about that? In fact, I was wondering whether Lewis was resisting for as long as he did due to his professional obligations or because he knew his own character flaw, which in his opinion made his own relationships destruct in the past. I mean, I was happy that he was self-aware about that and tried to work on that character flaw, but that made me also wonder whether counseling is the right line of work for him if he was so worried about that. I guess it is a good thing that his character seemed to be drawn in such depth to me and that I had to think about who Lewis was in my head for some time.

I was still very happy and very pleased that these two got their happy ending, they were that adorable together, but Lewis deserved couple of smacks as far as I was concerned. Grade B