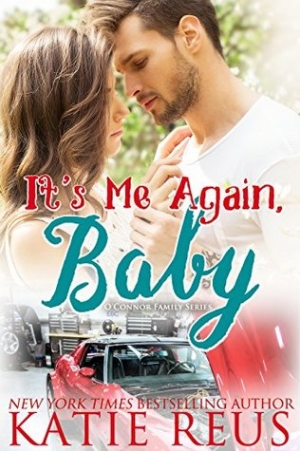 I’ve often enjoyed your books on audio, particularly your Red Stone Security romantic suspense series. I listened to Tease Me, Baby, the second book in the O’Connor Family series recently and I bought the first book, Merry Christmas, Baby around the same time. It’s Me Again, Baby is the third book in the series, set in Holly, a small town where it’s Christmas every day of the year, but they can pretty much all be read as stand alone stories.

Most of your books tend to be short and I often find them an ideal “palate cleanser”. I can read one in an evening and they’re perfect for when I want some instant gratification and no deep commitment. Writing short is a skill (DA readers may note it’s a skill I don’t have) and I like the way you pack so much into a low word count.

It’s Me Again, Baby is a second chance at love story, featuring Maguire O’Connor and Samantha Murphy. It’s under 100 pages long and you waste no time getting right into the thick of things. Maguire and Sam had had a hot and sexy week three years earlier when Maguire was home on leave from the military. Each felt a true connection had been made. Maguire shipped out and he never heard from Sam again. He doesn’t know what happened or why everything went to crap. As it happens, another woman who was interested in Maguire (but with whom Maguire had no relationship) turned up at the airport to see Maguire off and told Sam that Maguire had been hooking up with both of them. At 21 and lacking some maturity and self-confidence, Sam fell for her line and left without seeing or speaking to Maguire. The misunderstanding is cleared up (as they often are) with one simple conversation when the story begins. I admit I got a bit of whiplash with the speed of it. It was ridiculously easy to sort out.

Maguire is now out of the military and is the owner of a couple of auto shops and a car restoration business. He is on the lookout for a house with sufficient workspace on the property for cars and equipment and his mother (a prolific matchmaker) hooks him up with a realtor who just happens to be Sam Murphy returned to town from three years away in Oregon. (Sam’s dad died recently and she returned to Holly to be near her mother to support her.)

As Sam shows Maguire around some properties they both quickly realise their chemistry is even more intense than before and Maguire is intent on staking his claim pretty much from the get. Sam isn’t far behind.

The story touches on how Maguire had a hard time adjusting to life outside of a war zone and how he is really only just now really able to be fully present for a relationship. Also, surprise! Sam has a stalker – and the story takes an unexpectedly suspenseful turn about halfway through.

There’s a lot going on and the insta-love is strong. In a longer book I’d have rolled my eyes but I feel like I knew what I was signing up for with It’s Me Again, Baby so I’m not going to complain about it. Also, I don’t love the “evil other woman” trope but honestly it happened so fast I could have blinked and missed it.

Maguire and Sam certainly do have a lot of chemistry and they are both devoted to their families. Even in a novella, you are able to show those connections so very well and that is the strength of the book. And, despite the insta-love, I did believe the HEA.

Maguire certainly has alpha tendencies and when Sam is threatened, his super-protective caveman comes out to play. Sam lets Maguire know that won’t fly with her but she is also not stupid and accepts sensible advice.

She just wanted to make sure they had clear expectations where their relationship was concerned. She’d made a huge mistake once by not talking to him. Never again.

She slid off her chair and moved around the table until she was next to him—where he promptly pulled her into his lap. “It’s not like I can be mad at you for wanting to protect me,” she said, slipping an arm around the back of his neck as she cuddled up against him. “It’s just that I want a partner, not someone who orders me around.”

“I want that too. And I’ll try to ask first. But fair warning—I’m not going to nail that every time. I’m old and set in my ways.”

She snorted at his wry tone. “You’re not old.”

I read It’s Me Again, Baby in an evening and it gave me exactly what I was looking for. A sexy, flirty one-night stand with good chemistry, engaging characters and no messy morning after.