REVIEW: It Had to Be You by Jill Shalvis

I suspect you could write your Lucky Harbor books in your sleep. That is as much a testament to their sameness as it is to your skill. Every book in the series–with the exception of the second, The Sweetest Thing–features a young woman either facing a problem or needing to reboot her life, a super-hot guy who struggles to with the marriage and babies are your future thing, good female friends who constantly tell the heroine how great she is, paeans to the beauty of the Northwest Coast, feisty old people, and well-written sexy love scenes. I’ve read all seven and, though I’m tired of Lucky Harbor the town, I’ve been entertained by five of the Lucky Harbor books. 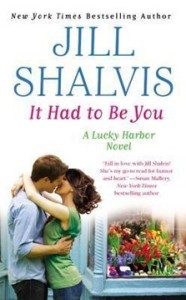 I read your latest Lucky Harbor novel, It Had to Be You, on a lovely Spring afternoon, sitting on my porch, drinking a glass of my favorite rosé. I thoroughly enjoyed myself. Within a week, I’d forgotten the plot, but, while immersed in your prose, I had a good time.

In It Had to Be You, the winning young woman is Ali Winters. She’s having a run of bad luck in Lucky Harbor. Her boyfriend, Teddy the town clerk, dumps her via text, fifty thousand bucks is missing from Teddy’s office and she’s the prime suspect, and Teddy suggests she move out of the house they’d shared, a house whose lease, unbeknownst to Ali, ended yesterday.

The owner of the house is Luke Hanover, a San Francisco cop who has, after years away, come back to Lucky Harbor for a much-needed three-week leave. (His high-profile case of a murderous Senator went terribly wrong.) Luke is expecting the house to be empty and is surprised to see a woman clad only in her undies standing in his kitchen, cussing someone out on her cell phone.

Detective Lieutenant Luke Hanover had been away from the San Francisco Police Department for exactly one day of his three-week leave and already he’d lost his edge, walking into his grandma’s Lucky Harbor beach house to find a B&E perp standing in the kitchen.

She sure as hell was the prettiest petty thief he’d ever come across—at least from the back, since she was wearing nothing but a white lace bra and a tiny scrap of matching white lace panties.

“You have some nerve you…you rat fink bastard,” she said furiously into her cell phone, waving her free hand for emphasis, her long, wildly wavy brown hair flying around her head as she moved.

And that wasn’t all that moved. She was a bombshell, all of her sweet, womanly curves barely contained in her undies.

Once Ali explains why she’s in his house, Luke lets her stay the night, which, of course, turns into lots of nights. (She can’t find a new apartment.) The two are hellaciously attracted to each other and, within the first week of co-habitation are locking lips and wanting more. Luke tells her they shouldn’t get involved.

Her body was still tingling from his kisses, so it wasn’t much of a stretch to believe that he could make sex far more than enjoyable.

She looked into his deep blue eyes.

“Not all men will disappoint you,” he said. “I don’t mean me. Because I will absolutely disappoint you. But we’re not all assholes, Ali. I can promise you that.”

Luke and Ali are a good match; their relationship felt balanced to me. Ali needs Luke more initially, but, as he spends time away from his real life, Luke begins to crave the peace and pleasure he finds with Ali. The two have smokin’ hot chemistry and the book has a reasonable balance between lusting and acting on that lust. Ms. Shalvis shows Ali and Luke caring for–taking care of–each other in ways that make their falling in love believable. I liked that the book didn’t end with Luke on bended knee–I was worried when I saw it had an epilogue but, fortunately, it’s proposal, wedding, and baby free.

It’s clear where the novel is going from the moment Ali and Luke meet. (The only surprising thing is the identity of the thief.) Reading It Had to Be You is a lot like rewatching a fun TV show: you already know what’s going to happen, you don’t have to pay much attention, and it’s a pleasant way to while away a few hours.

The weakest part of It Had to Be You is that it’s set in Lucky Harbor. I’ve had it with Lucille and her Facebook page, the chocolate chip cookies at the Eat Me Cafe, the teen-age antics that make Sheriff Sawyer’s days a hassle, and the sun sparkling on the enchanting coast. I’m ready to move on to, oh, Seattle where the lovers could meet cute over coffee in Pike Place Market (there would be spillage involved) and then argue about whether Amazon.com is a force for good or for evil (he says it is, she says it’s the Evil Empire of the world.)

That said, there are at least two more Lucky Harbor books in the works. And I bet I’ll read them, skimming through the descriptions of the too quaint little town and enjoying the romance, just as I did in It Had to Be You. I give it a B.